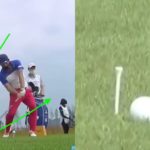 Remember Hosung Choi? The pro golfer who has a mostly-normal golf swing apart from his follow through, which is extremely not-normal? He was a super big deal in golf for about five minutes.

Truth be told, I quite enjoyed Hosung’s schtick at first. He had an interesting back story and always claimed his crazy post-shot antics were his way of “surviving” amid the intense pressure of professional golf, which was probably true, but there was also a heavy dose of showmanship along the way. But whatever, it was entertaining.

And then, at one point, he accidentally hit a playing partner with his golf clubs, which isn’t just dangerous, it’s also very unfair to your playing partner, who’s also a pro out there trying to make a living.

But what goes around comes around, because during the Korea Professional Golf Tour’s Busan Gyeongnam Open, Hosung hit a drive that was almost a complete whiff, but wasn’t. That’s the good news. The bad news? The drive only finished about an inch from where it started.

It’s a product of Hosung hitting a solid foot behind the ball and taking a divot with his driver while playing in the final group.