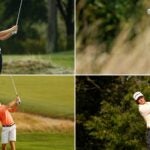 Only four golfers remain in the bracket at Oakmont.

What started as a field of 312 competitors at the 121st U.S. Amateur is now down to four. After battling through numerous rain delays and sweltering heat, the semifinals have finally arrived at Oakmont Country Club.

While the ultimate prize is the Havemeyer Trophy, there is still plenty at stake in the semifinal matches this afternoon. A spot in the 36-hole championship match earns both competitors an invite to next year’s U.S. Open and the Masters.

Play starts at 2 p.m. ET, so let’s look at the four golfers who will be battling it out for a spot in the finals.

The Houston, Texas native is a junior at the University of Texas where he earned first-team All American and All Big 12 honors as a sophomore. The 21-year-old is ranked 45th in the World Amateur Golf Ranking and has had a strong summer campaign thus far, including a 3rd-place finish at the Sunnehanna Amateur in June. Vick is looking to become the third Longhorn to win the U.S. Amateur, joining Justin Leonard and David Gossett.

Shot two-round total of 135 in stroke play to earn the No. 4 seed

Round of 64: Defeated Preston Summerhays, 2 and 1

Greaser is a junior at the University of North Carolina and is playing in his third U.S. Amateur. The 20-year-old is ranked 82nd in the World Amateur Golf Ranking and was a semifinalist at this summer’s Western Amateur.

Gabrelcik is both the youngest player remaining in the field (19) and the highest ranked (28th). He won the Phil Mickelson Most Outstanding Freshman Award during his first year at the University of North Florida as he won three tournaments in 2021. Gabrelcik is playing in his first U.S. Amateur.

Round of 64: Defeated Kieran Vincent, 1 up

Round of 32: Defeated Michael Thorbjornsen, 2 and 1

Round of 16: Defeated Hugo Townsend, 19 holes

The 22-year-old is playing in his second U.S. Amateur after earning the No. 2 seed and advancing to the Round of 32 last summer at Bandon Dunes. Piot is a two-time All Big 10 player at Michigan State where in 2021 he became the first Spartan golfer to advance to the NCAA championship as an individual since 2002. He is ranked 86th in the World Amateur Golf Ranking.

Road to the Semifinals

Round of 64: Defeated Cameron Sisk, 1 up

Round of 16: Defeated Thomas Hutchison, 4 and 3