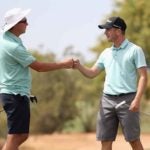 SCOTTSDALE, Ariz. — Zach Smith didn’t know his life was about to change while standing in the 13th fairway of Talking Stick Golf Course on Thursday afternoon, but he had an inkling. The fresh-faced UC Santa Barbara grad was in a dogfight with fellow mini-tour grinder Carson Roberts, with Colt Knost and Joel Dahmen in hot pursuit, lugging along their impressive golf resumes. Roberts played first on 13, firing at a dangerous flag that was tucked on a ridge on the left edge of the green. His ball carried a yard too far and rolled into the abyss. It was the kind of little mistake on which a tournament can flip. Smith, 24, looks barely old enough to vote, but he followed with a canny veteran play, his delicate shot landing well short of the pin and trickling to a stop 8 feet short.

Dahmen, the third player in the group, appreciated both the execution and the prudence. “Great play!” he shouted across the fairway. Roberts charged his putt 4 feet long. Smith took an extra look at his birdie putt and then brushed it in like a practice-round gimme. “I knew that was a big momentum putt,” he said afterward. In a classic match-play twist, Roberts missed his comebacker. Minutes earlier, they had been tied and now Smith led by two. On the 14th hole, the kid did it again, feathering another short iron in close for a birdie that pushed the lead to three strokes, what would ultimately be his margin of victory at the Scottsdale Open.

“I don’t know much about him, but this guy can play,” Dahmen said while waiting to tee off on 15. “He makes it look easy. I guess it is when you drive it down the middle and hit it to 10 feet hole-high every time.”

Smith roared home with a 62, and an oversized cardboard winner’s check for $20,000 awaited, one of the many charming old-school touches at this down-home event. “This is awesome,” Smith said. “I’m still in shock a little bit.”

Indeed, ”he was shaking so hard on 18 I wanted to hug him,” Dahmen said. “He handled himself unbelievably the whole day and then it seemed to hit him there at the end. I went in for the fist-pound, and we almost missed because his arm was shaking back and forth. But it was cool to see because I remember what a big deal it was to win my first mini-tour event.”

Smith’s spectacular play was a fitting end for a little tournament that went big-time when coronavirus concerns shuttered professional golf pretty much everywhere but Arizona. With nothing else to do, the Vegas sportsbooks laid down odds for every player in the field; the largely unknown Smith came in at 750-1. The ace Twitter account Monday Q Info (@acaseofthegolf1) provided a stellar live stream, and social media lit up throughout the three-round event. (Dahmen wound up getting dusted by nine strokes by Smith on Thursday and at one point lamented, ”I’m getting obliterated on Twitter right now.”) Smith, who was one stroke off the lead after an opening 63, tried to avoid the hype by staying off social media, but, he says, “I did see a few comments like, ‘Great job Zach, you made me a bunch of money, I’m now a fan for life.’ ” The rumor among the players was that Smith had put down the princely sum of $5 on himself – that would mean a $3,750 payday, exceeding eighth-place money at the Scottsdale Open – but he showed veteran poise by dismissing such questions after the final round. Either way, the winner’s check will go a long way toward financing a summer on the Mackenzie tour, coronavirus willing. “Money was getting tight, for sure,” said Smith, who grew up in Northern California but recently moved to the Scottsdale area to live with his brother and save on rent. “The timing couldn’t be better.”

Smith is a fitting champ, but there was no doubt that on Thursday the greater Scottsdale golf community was rooting for Knost, who has long run herd on various local money games. (Spectators were barred at the Open, but a fleet of carts still followed Knost around the course, ferrying friends in semi-official capacities.)

At the Scottsdale Open, Knost, 34, was playing with house money. In January, he had announced his retirement from competition, driven off the Tour by injuries and a new generation of bombers. With his gift for gab, Knost easily transitioned into commentating and podcasting (disclosure: Knost co-hosts a podcast for this website). But when the Scottsdale Open became a big deal he decided he wanted to play — “I’m bored and I like golfing,” he tweeted — and the field size was expanded to accommodate Knost, PGA Tour regular Scott Harrington and four others off the waitlist. Playing in the second-to-last pairing, Knost birdied four of the first seven holes (including a 60-foot bomb on No. 6) to pull within one stroke of the lead, but his putter went cold after that. He finished tied for third, a terrific showing for a guy just stepping off his couch.

Throughout the week, Smith made careful study of the players who have been where he aspires to be. “I learned a lot,” he said, and measuring his game against theirs gave him a shot of confidence. “It confirmed for me I’m on the right track.” And then some.

While Smith gave a victory speech in front of the hand-lettered scoreboard, Knost, Dahmen and a dozen other players milled around, drinking cans of beer and White Claw and telling tall tales. They didn’t appear to have a care in the world, except for maybe a few missed putts. These are unusual times, but, for one afternoon at least, the game was center stage, an appealing new champion had been crowned and all felt right with the golf world.

How is the coronavirus changing golf's future?