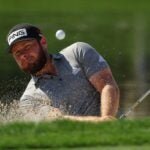 Tyrrell Hatton hits out of a bunker on Friday on the 17th hole at Bay Hill.

Tyrrell Hatton, the Arnold Palmer Invitational scorecards will tell you, shot a second-round 68, which followed an opening 69. The leaderboards at Bay Hill shared that Hatton was two shots out of the lead after Friday’s morning wave. Good stuff, right?

What say you, Tyrrell …

“I’m not particularly happy with how I hit the golf ball certainly the last few days,” he said. “I think the score is pretty flattering. I’ve putted really good, which is why I’ve got the score that I have, but I know that I can’t keep hitting it that badly certainly with it’s going to be playing much tougher this weekend.

“Hopefully, I can find a golf swing, and hopefully the putt stays up this weekend.”

He was good. He was honest. He was realistic. He was Hatton.

Before we go further, some background. This doesn’t happen too often. Pros in Hatton’s spot will find a synonym for “pleased,” mix in a cliche or two and bolt. Maybe it is the truth. But there’s no doubting Hatton. Pessimistic? Sure. But genuine. If you’ve felt that Hatton is one of the more endearing players going, this is why.

Let’s continue. Hatton’s assessment was spot on. As the afternoon groups began, these were his Strokes Gained numbers: 43rd off the tee, 22nd tee to green, and 82nd approach. In other words, average, at best. And Hatton was fifth around the green, and first in putting. Which meant, he’ll be in the final groups for Saturday’s third round.

Considering his frustration but also his position on the leaderboard, Hatton was asked if that was “a positive or a negative thing.”

“Obviously, it’s a positive,” Hatton said. “It’s a great feel this week. A lot of top-class players playing. I know deep down the long game isn’t good enough to have a chance to win if I keep playing like that. So, yeah, I just have to try and figure something out maybe this afternoon.

“I’m not one to go and hit balls after a round, but we only live half an hour away. And I’ll probably go out there maybe this evening and just hit a few and see if I can find a bit more of a positive feeling that will help us feel a bit more comfortable going into the weekend.”

And Hatton means it when he says he doesn’t hit balls after a round.

“Like I said, I don’t — I never even — playing poorly, I don’t often go and hit balls,” he said. “But I guess just being in the position I’m in, I want to play better tomorrow and Sunday and take a bit of pressure off my short game. So yeah.”

But it’s not all dire. At least two things are working in his favor. He’s won this event before, in 2000. His red cardigan, given to recent winners, “is hanging nicely in the wardrobe,” he says.

There’s also his work in and around the greens. On Friday, he took 22 just putts, over 102 feet, 6 inches. Though he’s sincere here, too.

“To be fair, I’ve always putted well around here,” Hatton said. “I don’t know what it is. I just seem to see the lines clearer than some of the other places that we go to. Generally, my start line’s pretty good. So if I can actually read the greens, then we should be all right. So far, so good.”

And his strategy for playing courses where he doesn’t have the right feel?

“You just avoid them.”