For GOLF’s intrepid columnist, watching the pros in person for the first time was surprisingly enjoyable 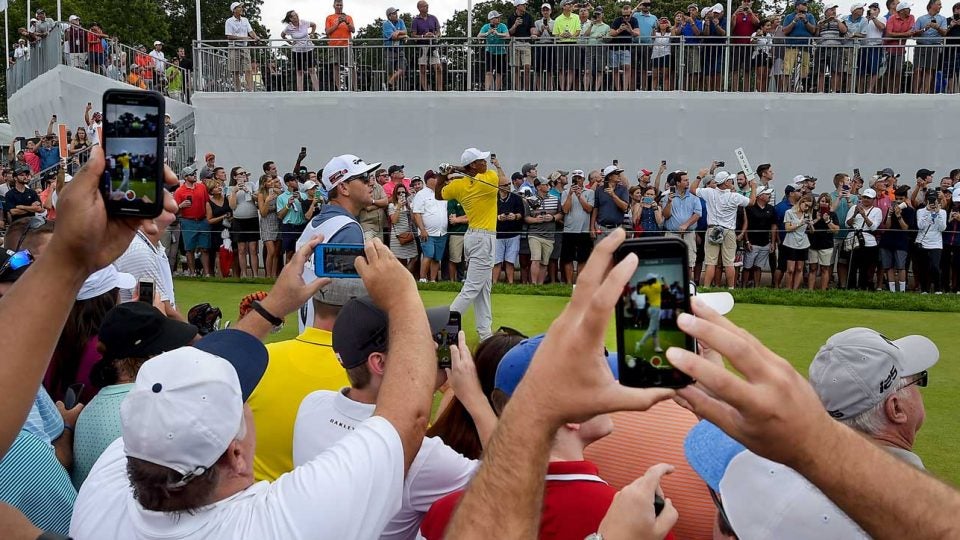 Within the first 15 minutes of my first-ever trip to a professional golf event, I nearly knocked Jim Furyk to the ground. One of the primary takeaways of a golf tournament — in this case, the 2019 BMW Championship at Medinah — is that the pros mingle a lot more intimately with fans than they do in other sports. Go to a Patriots game and you’ll be lucky, even with binoculars, to spot Tom Brady; getting up close and personal with LeBron James requires taking out a second mortgage. But at a Tour stop, the price of a ticket — any ticket — allows you to see the beads of sweat on these guys’ necks. Had I realized that, I might have paid closer attention to where I was walking, lest I plow into the pride of West Chester, Pennsylvania.

Furyk was polite about the bump-and-run as he headed from the players parking lot to the practice range, giving me a little pat on the back and an “All good, man.” But I noticed that every time I saw him for the remainder of the day, he seemed to make sure security was nearby.

Medinah is a beautiful place, and that’s another thing I learned at my first pro tourney: These courses are gorgeous. I’ll confess that as an outsider to the game, one aspect of golf that always turned me off was the seeming exclusivity of it. These large swaths of perfect, often private land are curated down to the most pristine detail, and yet 99.9 percent of humanity aren’t allowed to see it. To be honest, I still harbor these concerns, but let’s not kid ourselves: Now that I have seen it, it’s something I want to experience again. There’s something uniquely peaceful about a classic golf course, even one crawling with spectators.

At Medinah, I was surrounded by thousands of strangers — all dressed exactly alike — and scads of ads for Pepsi, but I still felt as if I were out there by myself. It’s the least crowded sporting event you can go to, even when it’s crowded. Yet there’s a warmth to the throng, particularly during practice rounds — like the first day I was there. You can’t help but feel cheered by the good-heartedness of fans who will show up at 8 a.m. to watch Jason Kokrak practice lag putts. (They might also be there for the Bud Light. Another first: I’ve never been to a sporting event where people pound domestic brew before banks open.)

News
Here’s what it’s like to take your range game to the course for the first time (hint: it’s humiliating)

The BMW — one of the FedEx Cup playoff events — is unusually intimate because the field is smaller and the spectator-to-player ratio is lower than at a regular Tour stop. At one point I noticed that Tommy Fleetwood and a handful of fans had developed an ongoing in-joke about what conditioner he uses to get his hair to look like that. That’s definitely not happening at a Yankees game.

Jon Tattersall, my long-suffering swing coach, was also my guide for the day, breaking down how these tournaments are set up (so that’s what goes on in the Titleist equipment truck) and introducing me to many of his coaching colleagues. I couldn’t help but notice a certain melancholy, though, as Tattersall hauled me around. I asked him if everything was okay. Was it me? Had someone noticed he was reduced to hanging around with a lowly journalist? What was up? “It’s hard,” he said. “It’s hard being here but not having a player here.”

Tattersall, of course, does a lot more with his day than try to make a stick out of an idiot writer like me. He works with real players, pros with whom he invests hundreds of hours, specifically so he can coach them through to events like the BMW Championship. He’s had guys make it here before. He just didn’t get here in 2019. He was happy to show me around — I think. He just wished one of his guys had given him a reason to stay. It’s a reminder that for all the fun of an event like this, for all the novelty, this is still a competition at the highest level. This is as good as it gets.

Being at Medinah blew me away — and the tournament had yet to even begin! I decided to spend the rest of my day taking in everything I could — and, just in case, keeping a safe distance from any and all Furyks.

Will Leitch is a columnist for GOLF, a contributing editor at New York Magazine, and the founder of Deadspin.