Wall-to-Wall Equipment: Did Viktor Hovland drop a hint on his equipment landing spot? 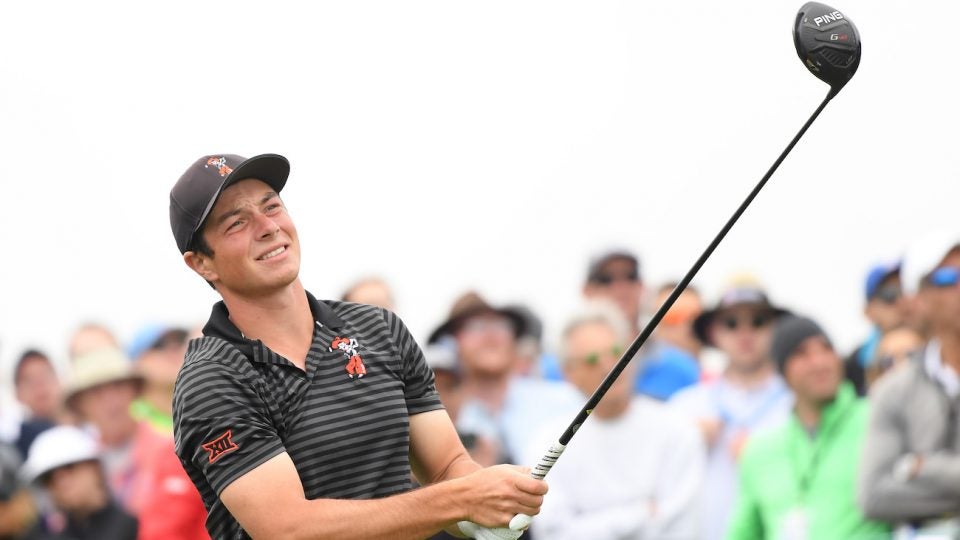 The last time we saw Viktor Hovland at the Masters, his equipment setup included TaylorMade’s M5 driver and P750 irons. The reigning U.S. Amateur champion, who’s expected to turn pro alongside fellow Oklahoma State teammate Matthew Wolff at the Travelers Championship, still had M5 in the bag during a practice round — alongside a new low-spin Ping G410 LST that wound up becoming a permanent fixture at the U.S. Open.

Luckily for Hovland, the driver change paid off at the best possible time.

The Norwegian not only led the field in strokes gained: off-the-tee at Pebble Beach, he finished the tournament plus-8.40 in the statistical category (nearly two full shots ahead of Xander Schauffele) en route to the lowest 72-hole score by an amateur in U.S. Open history (4 under).

According to Oates, Hovland kept the changes to a minimum with the driver, adding a couple grams of hot melt to the face to control spin and retaining the Project X HZRDUS Black 6.5 shaft from his previous build.

The low-spin G410 LST was joined by a split set of Ping iBlade/i210 irons. Split sets consist of at least two different iron models and are all the rage on Tour these days. The most common setup pairs forgiving long irons that produce a higher peak height with compact mid and short irons offering workability and flight control.

Instead of following the same script, Hovland chose to go with iBlade long irons (4-6) and i210 mid and short irons (7-PW). While i210 has a slightly larger profile than iBlade, Hovland found a lower, more controlled launch with i210.

The changes come at a curious time for Hovland, who made two significant alterations before his first professional start. While nothing has been confirmed, the timing of the Ping additions is worth tracking in the coming days.

Those who blinked likely missed Gary Woodland’s mid-tournament club change. It’s not uncommon for a player to change things up when the title is out of reach, but Woodland chose to go against the grain and replace his 18-degree Wilson Staff Prototype utility iron with a Staff Model Blade 3-iron following a second-round 65, which tied the lowest round ever for a U.S. Open at Pebble Beach. 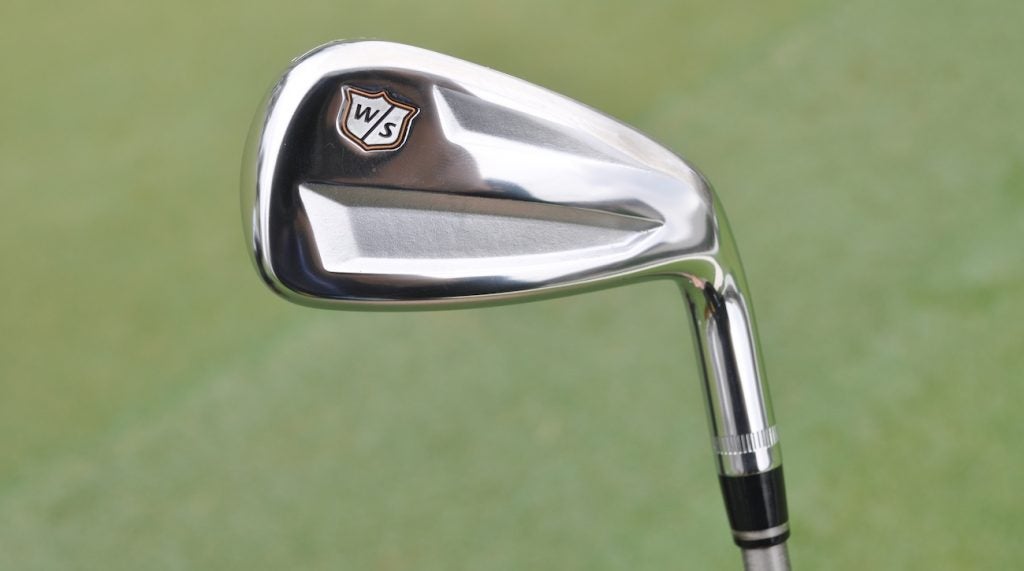 So what would lead Woodland to change clubs in the thick of battle? It likely had something to do with hitting certain yardages on a few holes at Pebble Beach — and maybe a stinger or two down the stretch, something we saw him do on a couple of occasions when a fairway-finder was necessary.

The difference in loft between the utility iron and 3-iron isn’t much — 18 degrees versus 20 degrees — but it was enough to get Woodland to shake things up during a critical moment in the tournament.

Xander Schauffele is a rolling a new @odysseygolf Stroke Lab Tuttle at Pebble. Currently leads the field in putting at plus-4.08. pic.twitter.com/skhPYcKYpa

Schauffele tested Tuttle extensively early in the week and was drawn to how the three lines on the top of the head helped frame the ball for a more consistent setup and better alignment. The putter is 34 3/8 inches long with a Superstroke Traxion grip.

Justin Rose inserted a TPT 15 LKP-LT-SW driver shaft at the Memorial before making another adjustment in the run-up to the U.S. Open. According to TPT representatives, Rose opted for a new 14 MLP-LT-SW shaft that was a full 10 CPM stiffer.

The TPT 14 MKP-LT-SW is the same shaft Bryson DeChambeau used to win his last four worldwide titles and offers a mid kick point with slightly different launch characteristics. The shaft is slated to hit retail later this summer.

Rory McIlroy’s decision to go with a four-wedge setup at the U.S. Open coincided with another adjustment to the top of the bag. To make way for an extra wedge, and adjust for smaller loft gaps, TaylorMade Tour rep Adrian Rietveld worked with McIlroy to find an efficient way to replace his 3-iron, which had to be removed.

No one reps their alma mater with more vigor than Rickie Fowler. By now, you’re probably aware of the all-orange ensemble he wears on Sundays — a nod to Oklahoma State University — the “Pistol Pete” emblazoned on his staff bag and custom Cowboy-inspired wedges that frequent the club setup.

But did you know Fowler added another piece of Oklahoma State flair to his bag at Pebble Beach? 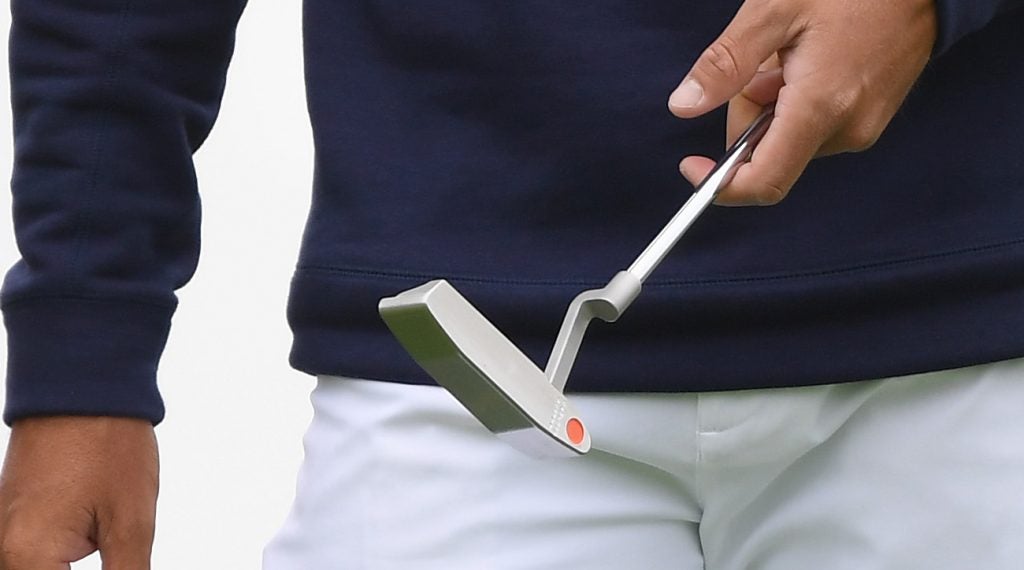 The “cherry bombs” on Fowler’s putter were popularized by Tiger Woods, who started using the Newport 2 GSS in 1999 at the then-GTE Bryson Nelson Classic. Prior to shipping the putter to Woods, Cameron noticed the head weight was two swing-weight points too heavy, which led him to mill a dot in the back cavity and another in the heel of the face to get the weight just right.

Titleist’s 620 Series and T100 irons made their Tour debut at the U.S. Open, but some players were already comfortable enough with their setups to break them in at a major championship. Rafa Cabrera Bello (620 MB), Justin Thomas (T100 4-iron), Charles Howell III (T100/620 CB split set) made the switch immediately, as did Cameron Smith who tested them off-site the week of Memorial at Scioto Country Club.

Smith confirmed before the testing session that he would put the irons in play but requested a set of T100’s in the same black finish as his AP2s. Titleist obliged and built Smith one full set of T100 Black irons. The black version will reportedly not be a stock option at retail.

Quick-hitters: Wanting to generate more spin with his irons, Jason Day switched from TaylorMade’s TP5x golf ball to TP5. … Odyssey had 60 putters in play at Pebble Beach, which was 14 more than the nearest competitor. … Fujikura had 17 Ventus shafts in play for the week, a total that was more than the first two majors combined. … Titleist won the driver count (24 percent) for the first time since 2000, when the U.S. Open was also played at Pebble Beach. The brand also won the ball count for the 71st year at the U.S. Open. … Chesson Hadley inserted a Titleist U500 3-iron. … Nate Lashley added a Ventus 7X shaft to his Ping G410 5-wood. … The popularity of driving irons at Pebble Beach saw Tommy Fleetwood (Recoil 110), Francesco Molinari (Recoil 125) and Justin Rose (Recoil 125) put UST Mamiya Recoil shafts in play.