PEBBLE BEACH, Calif. — You’ve seen them by now, those massive yachts floating out in Stillwater Cove. The Fox Sports broadcast loves them, and why wouldn’t they? Pebble Beach is, as they say, the greatest meeting of land and sea.

What you don’t learn from those drone visuals on the broadcast is what the view is like on board. It is unquestionably the greatest way to watch the U.S. Open at Pebble Beach.

For starters, on the 70-foot McKinna named Blue Steele, there’s Steve Elkington lounging with his feet up, weighing in on all things golf, from playing a shot from the cart path to the steepness of Jordan Spieth’s swing. In Elk’s mind, the perfect strike is one that hits the green and stops, not one that spins back toward you like Spieth’s did on the 15th Thursday.

Elk is friendly with the yacht owner, and he’s one of eight people on board Thursday afternoon. His observations wouldn’t seem nearly as astute if it weren’t for the accompanying broadcast streaming on a 42” flatscreen, which happens to lift up out of the wood counter, and goes really well with the endless caramel corn and Fuzzy Zoeller’s vodka. For the Warriors fans on board, life got really good when Game 6 of the NBA Finals began. 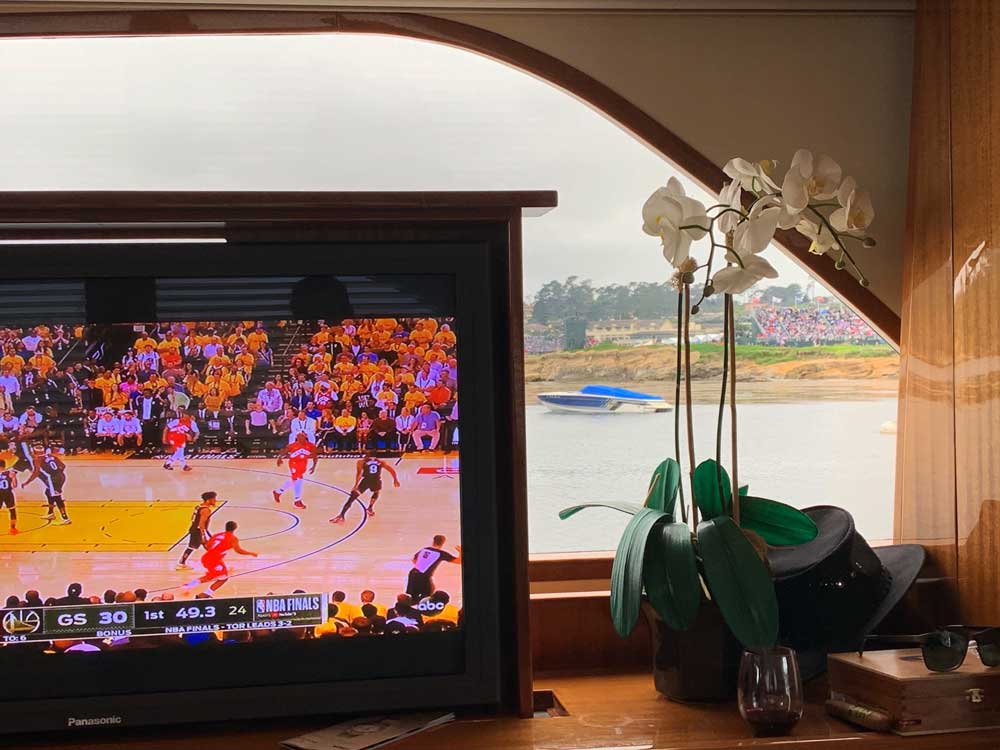 Hoops and golf, out on the water.
Sean Zak

Thanks to the proper connections, dinner was ordered and ‘shipped’ out (call it UberBoats) from Pebble’s famous tavern, The Tap Room. With the Warriors settling in and Klay Thompson still on his feet, the vibes were good and the drinks were flowing.

As the drone hovers overhead, you’re reminded you’ll soon be watching yourself on Fox. The scale of those visuals don’t do the yachts justice, though. Reminder: our Blue Steele is 70 feet long. Its big brother floating nearby is a Leight Star that stretches over 140 feet. That size is none too different from the golf world’s favorite yacht, Privacy. You could land a helicopter on the Leight Star, if you were a skilled pilot.

Joining the Leight Star and Blue Steele in the cove is Bella Donna, a catamaran that also stretches to 70 feet. Then there’s Giorno Libre, a 46-footer nestled a bit closer to the 17th hole. One thing is clear, these boats were not here last week. They are here for the golf, renting one of the 23 moorings at Stillwater Yacht Club. The Blue Steele was actually docked down in Cabo San Lucas last week, where it is listed for sale, before making the 6-day journey north to Monterey. 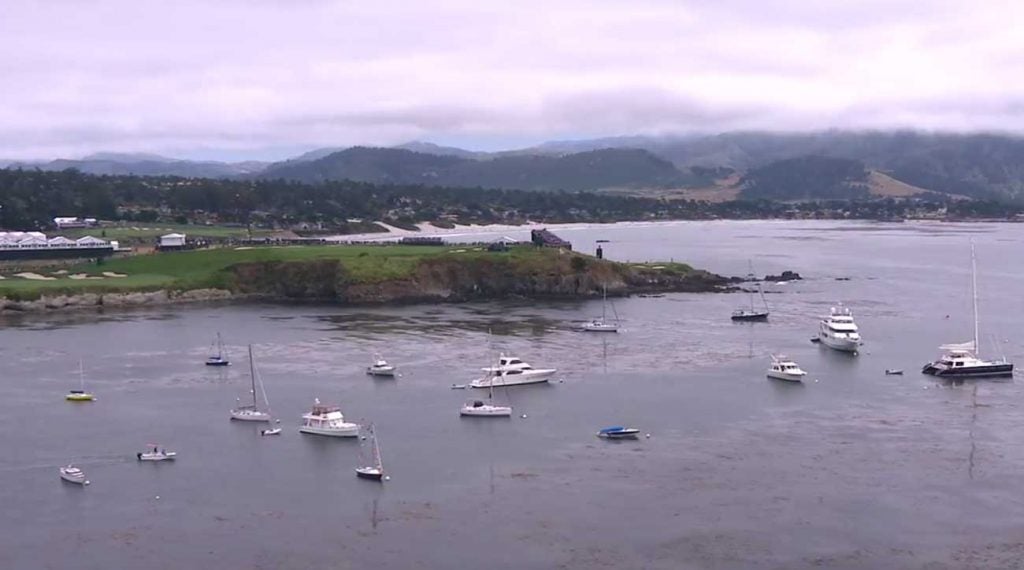 There are many more boats in Stillwater Cove than there were last week.
FOX Sports

From all these boats, the right set of binoculars offers one of the greatest panoramas in golf. From the left, there’s your 18th tee, the 17th green, the 4th hole, the 5th hole, and every acre of the par-5 6th. (Up in the cockpit of the Blue Steele, a tiny TV screen is embedded in the dashboard. The broadcast helps fact-check everything you’re seeing and hearing.) Off in the distance and out to the right fly those tiny drop shots players hit on the legendary 7th hole. The hole looks even smaller, but just as difficult, from the water.

Might be watching golf through binoculars from a yacht, idk you tell me pic.twitter.com/fI7CHaEE05

For those moments when luxury grows stale, passengers can dinghy to the dock and pass through their own special U.S. Open entrance, Gate 16, which does about 60 ticket-checks per day. The main entrance will do about 500 times that.

When the last few groups finished their rounds Thursday evening, a handful of golf-goers returned to the yacht for a nightcap. The owner of the yacht preferred not to be named, but rest assured he’s enjoying his time out there. We were sipping his family’s own sauvignon blanc, straight from the vineyard up in Napa Valley. Have they told you about the good life here on the peninsula? This is the good good life. Of course, it always could get better. The 70-footer is nice, but his brother bought a 115-foot behemoth, so a change might be in order.

Back on the pier, the dockhands were closing up shop for the night. On Thursday, one of them admitted the flashy yachts have called for more security than normal. Throughout the afternoon, as many as 50 bodacious spectators (by his estimate) had claimed to be invited out to the Leight Star. Merely from a distance, or via the broadcasts, life on the boat had been romanticized.

“People come out on the dock and say they’re friends of people on the yacht,” the dockhand said. “Then we ask them for their name and they say ‘Oh, just give us a ride out there. My buddy is on the ship.’ We say we can’t do that. They need to be on the list. Then they fake a phone call and walk off the dock. They’re all just trying to join the party.”