PEBBLE BEACH, Calif. — Over lunch the other day, Michael Murphy — the protean philosopher of the human potential movement, founder of the groundbreaking mind/body/soul retreat center Esalen, and author of Golf in the Kingdom — was asked if he had any regrets in his long and eventful life. Even at 88, Murphy’s blue eyes are as clear and alive as the Pacific Ocean, and he had no trouble summoning an answer: “I’ve never seen Tiger Woods play in person.”

With a little help from the good people at the USGA, Murphy got his wish during the first round of the U.S. Open. Crossing the footbridge to the 1st tee (accessible only to the lucky few with inside-the-ropes lanyards), Murphy couldn’t contain his giddiness. “I feel like a farm boy taking his first trip to the big city,” he said.

Tournaments
Tiger Woods’ first round of the U.S. Open explained in 18 sentences

Murphy was feeling particularly sentimental because of his long romance with Pebble Beach. He played it for the first time when he was 14, and it was love at first sight. Ever after, he and his brother Dennis, who carried a handicap index of 2, often made the drive from their home in nearby Salinas, happily plunking down the $5 greens fee. They were regulars in the gallery at the Crosby Clambake, and Michael developed a fascination with Ben Hogan. He would shadow the great man for his marathon practice sessions, on what used to be open land adjacent to the 2nd fairway.

“There was a Zen aspect to it,” Murphy says. “There was a great stillness all around him. Nobody spoke. Nobody moved. We just watched him. He was so focused it was like he was in a meditative state. There was such economy of motion in his swing, and everything he did, really. It was beautiful to watch.”

Murphy was a keen golfer and an inquisitive soul. In the late 1950’s, en route to studying meditation at an ashram in India, he made a pilgrimage to St. Andrews. He was forever changed by the romance of the linksland and the colorful characters he encountered in the auld grey toon. Murphy poured his love of golf and the metaphysical into Golf in the Kingdom, which was published in 1971 and has been a cult classic ever since. It remains in print all these years later, having sold well over a million copies in nearly two dozen languages. In certain circles — namely, among those who see golf not merely as a game but as a transportive vehicle for understanding more about nature, ourselves, and each other — Murphy is as revered as Woods. He was invited to the 1972 U.S. Open as a special observer and ever since has followed the professional game closely. 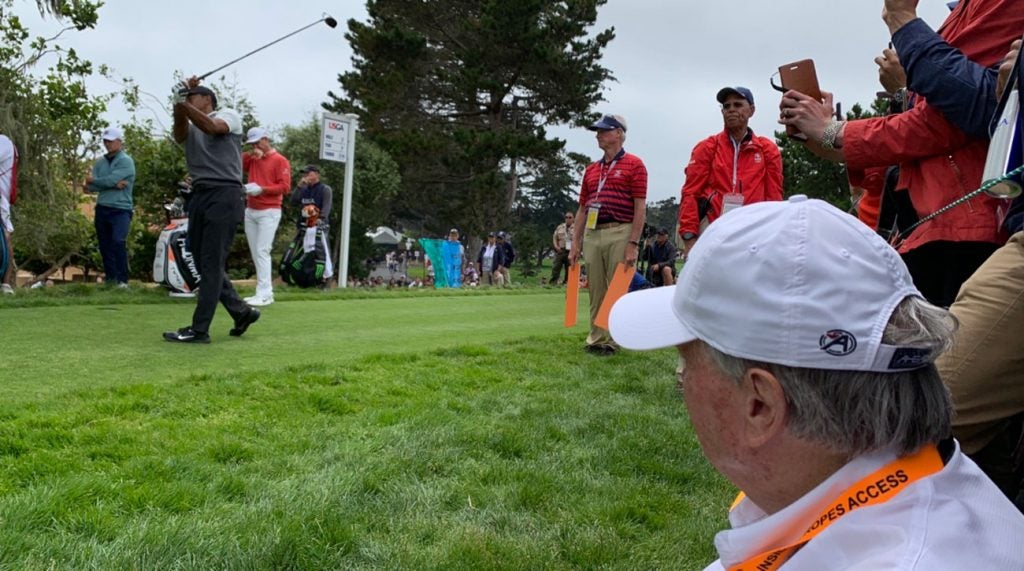 Woods was already on the first tee box when Murphy arrived, taking languid practice swings. “He looks slimmer in person,” Murphy said. “On TV he’s larger-than-life. There’s a hint of the superhero. To see him up close, you get a better sense of his humanity.”

Murphy eyed Woods’s every move. A lifelong seeker, he has immersed himself in yoga and also delved into somatics, a field within bodywork and movement studies that emphasizes internal physical perception and experience. After watching Woods make a textbook par on the 1st hole, Murphy observed, “There is more peace in his swing. In the years after he hit the hydrant, it felt like he was lunging at the ball. There was an element of violence, which perhaps betrayed an inner struggle. Now his swing exudes calm and confidence.”

Murphy was just as interested in how Woods handled himself between shots. He was fascinated by the low-key way Tiger slapped hands without making eye contact on the walks between green and tee, simultaneously giving something to his public while also withholding. He was also struck by the regal way Woods carries himself. “He walks beautifully,” Murphy said. “He has a high carriage, with an immense sense of aristocracy.” And yet Woods maintained an easy rapport with his playing partners Justin Rose and Jordan Spieth, which Murphy likened to the Stuart kings of Scotland. “They took great pride in playing golf with commoners,” he said. A few times Murphy maneuvered his way onto a tee box and was just a foot away from Tiger as he settled over the ball. Murphy was riveted by the look in Woods’s eyes. “They show hyperfocus but also relaxation,” he said. “Which, by the way, is also the secret to lovemaking.” 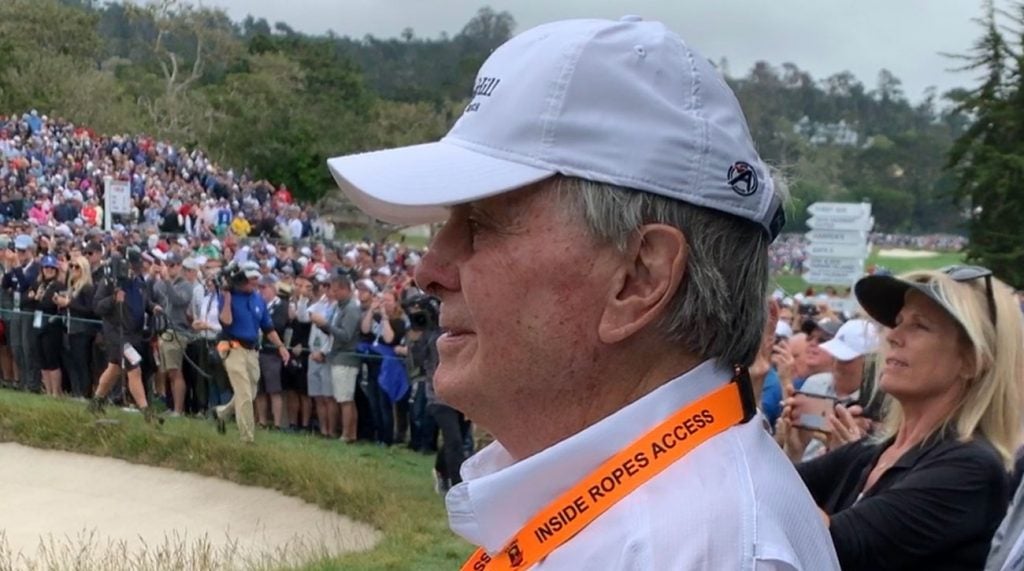 Michael Murphy takes in the view at Pebble Beach — the stomping grounds of his youth — on Thursday.
Alan Shipnuck

When he was 53, Murphy ran the 1,500 meters in 4:35, placing third in a national championship for the 50-plus set. He now lives with his bride of 48 years, Dulce, in a redwood forest just north of San Francisco and tries to walk four miles a day. He had no trouble summitting the hills of Pebble Beach. Each hole brought back memories of youthful hijinks. There was the time he and Dennis were playing Pebble and Bing Crosby and Bob Hope were in the group ahead of them. On the 10th hole Dennis jarred his approach for eagle; the only problem was that Crosby and Hope were still standing on the green, putting. The Murphy boys thought they were in trouble but as they approached the green Crosby and Hope offered a rousing ovation. On Thursday, Murphy returned the favor by cheering lustily for Woods, press pass be damned. When Tiger stuck his approach on 4 and then rolled in the birdie putt, Murphy gave a fist-pump. Another bird on the 6th hole brought a full roundhouse. When Woods banged in a long, curling birdie putt on 7, Murphy loosed an unbridled, “Wooooooohoooooo!”

Crossing the footbridge to the 1st tee, Murphy couldn’t contain his giddiness. 'I feel like a farm boy taking his first trip to the big city,' he said.

What is it about Tiger that moves him? “I admire the profound authenticity to his craft,” Murphy said. “It reminds me of Hogan.” But there is much more to it than that. During the first dozen years of Woods’s career, when he produced golf of unparalleled dominance, Murphy loved to watch him play but felt less connection. “After the scandal,” Murphy says, “the story became much more interesting. It’s the classic hero’s journey. It was too easy for Tiger, and then it became much too hard. That he has made it back to the top is a great American story.”

So is Murphy’s. His grandfather was the delivery room doctor who brought John Steinbeck into the world. Murphy had a privileged youth and after Stanford could have enjoyed a quiet, comfortable existence. Instead, he has devoted his life to expanding and improving the human condition. The day after his jaunt around Pebble, Murphy was to preside over a long day of meetings for Esalen’s Soviet-American Exchange Program, which was created in 1990 to foster citizen-to-citizen diplomacy. Murphy remains the guiding light for the Shivas Irons Society, founded during the 1992 U.S. Open at Pebble Beach to bring together his fellow travelers in the game. Shivas, of course, is the wise and mysterious golf pro that the protagonist of Golf in the Kingdom — a young, idealist Californian on his way to study in India — encounters during a life-altering round of golf at the mythical Burningbush links.

News
Tiger Woods says he probably has 40 majors left to play; Jack Nicklaus agrees with him

Woods never talks about the books he is reading, or has read. Maybe he’s cracked Golf in the Kingdom, maybe he hasn’t. That doesn’t matter to the book’s author, who after a long afternoon of trailing Tiger around Pebble Beach felt a new kinship with the great champion. “What a thrill this was,” Murphy said, bidding adieu. He was deeply moved to have experienced Woods up close and personal. “It was a reminder,” Murphy said, “that the flesh itself is just a vehicle for the divine spirit here on Earth.”