Team Player: Tiger Woods raising his hand for a Presidents Cup captaincy is yet another sign that he’s evolving

ORLANDO, Fla. — Tiger Woods has walked into a hundred late-afternoon press conferences wearing black pants and a red shirt, his Sunday get-up all through his nearly 22-year career. On Tuesday afternoon, at half past four, he slipped into the Latrobe Room, on the second floor of the clubhouse here at Bay Hill, in his Sunday best. Black pants, red shirt, matching hat. He was swoosh-free, instead sporting the logos of his new team: the 2019 U.S. Presidents Cup team, which he will captain.

Ernie Els will run the International team. It will be a December event, played at Royal Melbourne, the majestic Alister MacKenzie links in Melbourne, Australia. It already sounds good. Jay Monahan, the Tour commissioner, was sitting between the captains for their half-hour meet-the-press session.

He was in a good spot, and golf is in a good spot. Woods seems happy and healthy and he’s talking about trying to be a playing captain, but he made the statement in a singularly winning way. “It won’t be just my decision,” Woods said, describing a scenario where he might be in the mix for a spot on the roster. “It will be a collaborative effort.”

This is a remarkable statement from Woods, because through most of his amateur career — excluding his two years on the Stanford golf team — he was the ultimate lone-wolf golfer. Through the first 15 or more years as a professional, that was even more the case. In recent years, as an assistant captain on the last Ryder Cup team and the last Presidents Cup team, he has embraced his emerging elder-statesman role in a significant way.

His Tuesday press conference was different. He was wearing the uniform of his newest squad, the 2019 U.S. Presidents Cup team.

It’s kind of a funny name, Presidents, plural, no apostrophe. The trophy, vaguely, carries the impratur of the sitting U.S. President, various predecessors, along with various foreign presidents or prime ministers or what have you. Woods and Els have both played golf with Donald Trump as president, but Woods might be the only person in the world who has played with both Trump and Barack Obama in the past half-year. There’s nothing inherently political about the Presidents Cup — particularly when you compare it to the overt politics of the Olympics — but all of Woods’s captain predecessors have had to navigate presidential personalities and golf interests in various ways.

Els and Woods played deep into the night (or so it seemed) at the 2003 Presidents Cup in George, South Africa, the match ending in a famously genteel 17-17 tie. The captains then were Jack Nicklaus and Gary Player, and their close friendship added immeasurably to the appeal of that year’s event. But in general, the Presidents Cup has had none of the urgency of the Ryder Cup. Having the intensely competitive Woods, who will be just short of his 44th birthday, as the U.S. captain could and should contribute to a raising of the stakes for next year’s competition. Before that, Woods will be an assistant captain to Jim Furyk on the U.S. Ryder Cup team in Paris this September.

You can tell that is new chapter in the life and times of Tiger Woods in that he called Monahan to lobby for the job.

“I called Jay and said, ‘Hey, Jay, might you be interested in me possibly being the captain of the 2019 Presidents Cup team?’

“And then he said, ‘Yeah, I think we might be able to work that out.’”

When was the last time you heard Woods tell a story that centered around a private conversation? Likely never. This is an interesting period in his life.

The session with Monahan, Woods and Els lasted a half-hour, after which there was an intermission. One bar stool was removed, the Presidents Cup scrim behind the three men was removed and replaced with one promoting the Arnold Palmer Invitational presented by MasterCard, to give it the full-name treatment Monahan and other Tour officials always do. (It’s understandable. MasterCard is paying the rent this week.)

During this break, Woods did not change into his Nike gear. He chatted with two reporters and waited for Act II, another half-hour of Woods politely, and often engagingly, answering questions from reporters. He admitted that he avoided driver on the 18th hole of the Valspar tournament because, basically, he was afraid of where it might go. He is working now without a swing coach for the first time in his career — in his life, really — and he spoke about that, indirectly.

“I’ve gone back to a lot of the stuff I used to do with my dad and how he first taught me how to play golf,” Woods said. He’s making swings that only a grown man built like an NFL safety could make, but if he’s in touch with his inner-teenager, it’s interesting and telling and a neat trick. 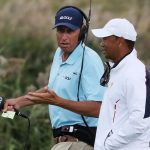 You may also like It’s official: The Presidents Cup is dead. Here are 8 ways to revive it

Woods, like Nicklaus and Lee Trevino before him, has always been intensely knowledgeable about the game and its many subtleties but he doesn’t readily share his insights. He did on Tuesday. Speaking of his chipping practice at Bay Hill, where he has won eight times, he said that on the practice green he’s “able to hear the chips make that hard skip.” Sam Snead used to say that hearing was the most important sense for his golf. He maybe didn’t mean it literally, but it’s an insight that Woods would surely understand. Maybe it came up at the Masters dinners he attended with Snead.

On Tuesday, Woods spoke of walking Arnold Palmer into the 2016 Masters dinner. “Jack and I walked Arnold into the dinner,” Woods said. “That was tough. Because we knew.” He didn’t need to say the next part. That was on April 5. Palmer died five months and two weeks later.

Let’s conclude here on a lighter note. A woman reporter asked Woods where his astonishing clubhead speed is coming from. Woods said, “Dude! If I knew, I would tell you!”

When Act II ended, Woods slipped out a side door. In the back of the Latrobe Room, hors d’oeuvres were being served, “lamb lollipops” and chilled prawns and other staples of the Australian diet. The cloth trashcan liner had Arnold Palmer’s distinct and clear signature on it and a giant ice chest bore the name of his son-in-law, Roy Saunders. Maybe Roy and Amy’s son, Sam, will play on Woods’s Presidents Cup team. Maybe Woods will win, for the ninth time, the event started by Sam’s maternal grandfather. Woods won’t be making Palmer’s patented pants-hitching part of his routine. He said, “I just can’t make it look cool.”