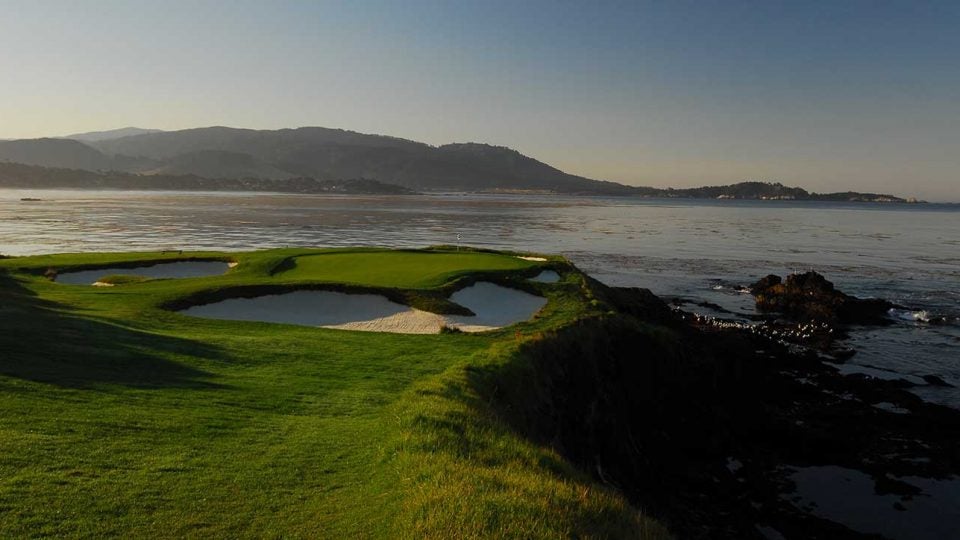 For some holes, like the 7th at Pebble Beach, forgetting a camera is not an option.
Bob Atkins

Here’s everything that you need to know about Pebble Beach, one of the most iconic courses in the world and host to this year’s 2019 U.S. Open.

Course origin: Developer Samuel F.B. Morse was challenged with making Pebble Beach an attractive real estate investment. Morse believed that the development of a golf course along the rugged coastline would attract people to the south side of the Monterey Peninsula. So, in 1919, Morse assigned amateur course designers Jack Neville and Douglas Grant to build the course. Despite very little experience designing courses, Neville and Grant put together a track that has had to undergo only minor renovations. Its official coming out party was in 1929 when it hosted its first U.S. Amateur, which featured the likes of Bobby Jones.

Course design: When the course was originally designed, Neville and Grant’s goal was to place as many holes as possible along Carmel Bay. The course, which features dramatic views of the Pacific Ocean, runs 7,040 yards and has four tees for golfers to use (blue, gold, white, and red). While the fairways are made from winter ryegrass, the greens use poa annua grass. The course has undergone only a handful of renovations, but its most recent redesign came before the 2010 U.S. Open. Led by Arnold Palmer, four greens and 16 bunkers were rebuilt, altered, or installed, 11 tees were enhanced, trees were added or adjusted on six greens, and the course distance was lengthened.

Longest hole: The par-5 14th hole runs 572 yards from the furthest tees and plays as the number one handicap. The dogleg right is a three-shot hole for almost all golfers. The well-placed bunker to the right of the fairway can capture shots that are aimed at cutting the dogleg. Golfers should use as much club as possible on their second shot. If the pin is tucked upper left, players are advised to take one extra club to carry the bunker in front of the green.

Shortest (and most iconic!) hole: The debate over what Pebble Beach’s most iconic hole is can get heated, but luckily enough, one of them happens to be the shortest hole on the course. The par-3 7th hole, which runs 106 yards from the back tees, is in fact the shortest hole on the PGA Tour and plays as the number 18 handicap. Situated on Arrowhead Point, the wind can get crazy at the 7th hole. As a result, club selection is dependent upon how strong the wind is. Sam Snead once opted to putt off the tee and down a dirt cart path instead of sending a shot airborne into the crazy wind. Golfers are advised to try a knockdown shot, keep the ball from going into the wind, and play it safe to the middle of the green.