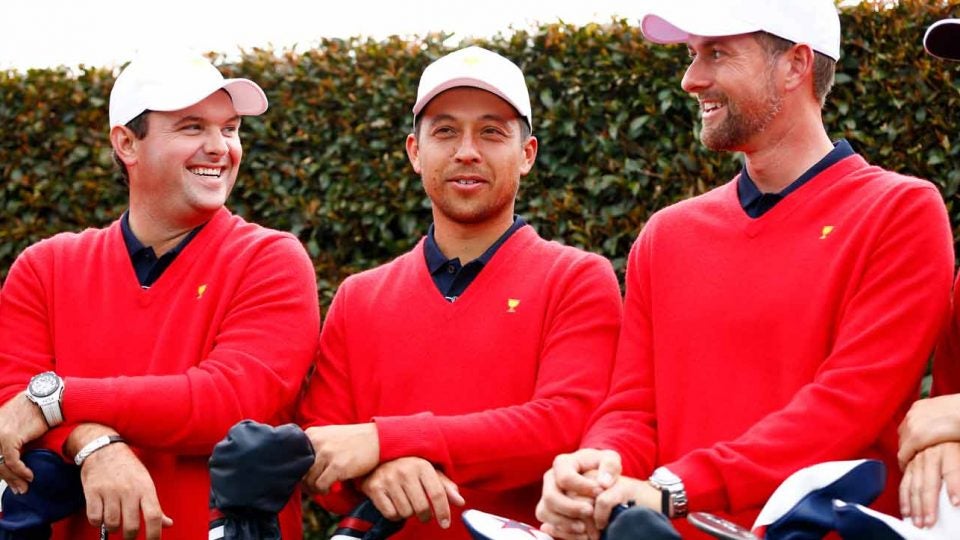 The wait is over, and the 2019 Presidents Cup is set to kick off Thursday at Royal Melbourne (Wednesday night in the U.S.). U.S. team playing captain Tiger Woods will tee off in the first match of the event, but it’s another American player who is drawing the most attention ahead of the start: Patrick Reed.

Much debate was had over whether Captain Woods would sit Reed for the first session given the cloud of controversy surrounding Reed’s controversial waste-area penalty last week in the Bahamas, not to mention the ensuing uproar.

But Tiger isn’t backing down in the face of pressure. Reed will indeed play the first session of the Presidents Cup. He will not go out in the first group with Tiger, though, as some observers had predicted. Reed will play in the fourth match at 10:17 a.m. local time on Thursday, which is 6:17 p.m. ET Wednesday night. Reed’s partner will be 2012 U.S. Open champion Webb Simpson.

The mild-mannered Tour veteran is a solid choice to balance out the intensity that will be surrounding Reed in Australia. Simpson has never been one to court controversy, and on top of it he had a great year on the course. Simpson finished 16th in the FedEx Cup standings and is ranked No. 11 in the OWGR, one spot above Reed. He’s also collected top 10s in all three tournaments he’s played this fall.

Reed and Simpson will face off against the formidable duo of Hideki Matsuyama and C.T. Pan. Matsuyama is one of the top-ranked players on the International team (21), and Pan collected his first victory at the RBC Heritage this year.

Reed/Simpson against Matsuyama/Pan will be the fourth or five fourballs matches contested on the first day of the Presidents Cup. The first match kicks off at 5:32 p.m. ET Wednesday night with Woods and Justin Thomas taking on Joaquin Niemann and Australian Marc Leishman.

You can see a full list of matches and starting times for the first day of the 2019 Presidents Cup here.