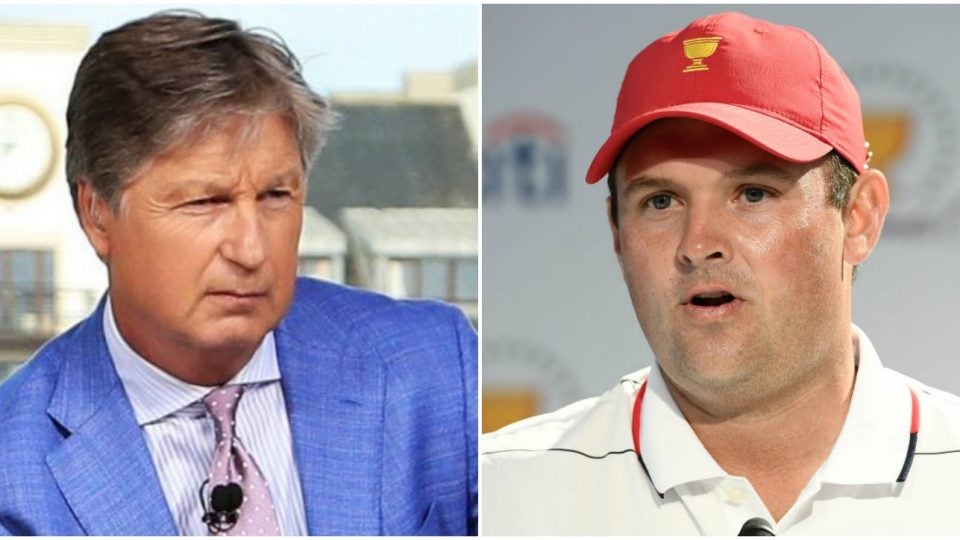 Amid the swirling allegations surrounding Patrick Reed, with many golf fans believing he intentionally improved his lie during the Hero World Challenge, Brandel Chamblee is coming in hot.

At issue was, of course, Reed, who brushed away sand twice while taking a backswing from a waste bunker while in contention at the Hero. Reed was later penalized two strokes, accepted the penalty, but also blamed the backlash on a bad camera angle and an unfair reputation.

Chamblee was in top form during the segment, which you can watch below. He cut straight to the heart of the matter with his characteristic fearlessness, pulling no punches as he rifled off one-liner after one-liner.

It started when Chamblee was asked by host Ryan Burr if this would effect the team during this week’s Presidents Cup. Chamblee said the team was “well-coached” enough not to let it fester, but that this issue will cause disharmony in the team.

“Deep down in the marrow of this team, they will be affected by this controversy,” he said. “Their DNA as a team has been altered. To defend what Patrick Reed did is defending cheating. It’s defending breaking the rules.”

“The specter of having in their midst somebody who so flagrantly broke the rules; look, they made a deal with the devil when they put Patrick Reed on this team,” he said. “They thought that whatever darkness he would bring to the team would be offset by his competitive fire. When was the last time a teammate stabbed everybody in the back as soon as the event was over? It was the last time there was a team event, and it was Patrick Reed.

Chamblee concluded by saying he had taken a “wrecking ball” to Reed’s argument that he was a victim of his previous reputation.

“This was flagrant,” he said. “No way, no camera angle you could look at. Anybody in the world of golf who watched this, it was repugnant video to anybody in the world of golf. … As far back as this game goes, at its inception, is that you do not improve your lie. It’s not a new rule. It’s been a long time, I don’t care what camera angle, he will have known he’s improving his lie.

“The fact that he thinks there is no intent. I think his ego is as big as Jupiter. Ego monsters are irritated by facts, but they’re not moved aside from them. They think their ignorance of the facts, or their version, of what happened is greater than the truth.”

He concluded: “This is going to follow him around like the video of Nixon saying ‘I’m not a crook.'”

Watch the full segment below to get the full effect. It’s well worth your time: