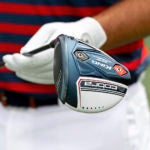 Check out the newest from Cobra.

To celebrate Independence Day, Cobra is releasing limited-edition Cobra SpeedZone and SpeedZone Xtreme drivers that have a patriotic color scheme. Creatively named “Pars & Stripes” — a play on the “Stars and Stripes” of the American flag — the drivers feature white crowns, hints of red and blue on the sole, and a blue PVD face.

The driver heads themselves are equipped with all of the same technologies as the original retail models. That includes the CNC Milled faces that maximize ball speed, low CGs (center of gravity) for high launch and low spin, and aerodynamic shaping to reduce drag. They also have 360 Carbon Wrap crowns that helped Cobra reposition weight low, back and around the perimeter to help with speed and forgiveness.

Interested in a purchase but not sure which model suits you best? The SpeedZone driver has a lower spin profile that allows for front-to-back weight adjustability in the sole to manipulate spin and launch. The SpeedZone Extreme driver, on the other hand, focuses on maximum forgiveness for golfers who don’t always strike the center; it has a larger shape, more perimeter weighting, and a 17-gram tungsten weight in the rearward portion of the head.

Cobra’s limited-edition, USA-inspired drivers will sell for $549 each (right hand only; stiff and regular shafts, with X-flex available on custom orders), and they begin selling on Friday on the company’s website. You can pick one up here.

For all your other golf-shopping needs, check out our new Pro Shop.