Caddie Chronicles, Day 2: Getting to know my boss — plus, my first caddie care package!

PALM HARBOR, Fla. — If you’re a PGA Tour pro, how do you get into a tournament? Like, physically, how do you enter the gates and show them you’re a player? I posed the question to my boss for the week, Martin Trainer, as we approached Innisbrook’s front gates Tuesday morning.

“I mean, we’ve got this courtesy car. That’s our pass,” Trainer said. “This thing is basically just a giant parking sticker.” Oh. Duh.

Day Two in Caddie World dawned like a dream. When we last checked in from Florida’s West Coast, Trainer and I were splitting a room at the Holiday Inn. His goal for Tuesday morning was to sleep in as long as he could, making up for the early mornings Tour life demands. He made it to about to 9 a.m. What a life, where sleeping to 9 is considered productive.

Tournaments
What is it REALLY like to caddie on the PGA Tour? I’m about to find out — and so are you

We had one goal in mind entering Innisbrook’s player staging building: breakfast. There’s an important distinction between the player locker/dining room and the “caddie lounge,” but in this case acting like I belonged was plenty effective, as we both breezed into player dining without a problem. Breakfast was already being wheeled away, but we grabbed some bacon, sausage, eggs and home fries while we could, then snagged a seat at a table alongside South African Dylan Frittelli, who Martin knew slightly.

I told him what an honor it was to meet the top-ranked Dylan in the world (I’d once aspired to the title, but never made it higher than fourth). It was a pleasant surprise just how conducive to conversation the players’ locker room really was. A handful of tables were set up near the dining area, which required players to share tables and therefore words. Martin is an outgoing fellow with a curious mind, which helped — even though he says he has no close friends on Tour, it seems like he knows at least half the guys here.

Of all the players in the field, I could not have been more excited for a player to appear at the other end of our table than Ted Potter Jr. I have long admired the unassuming lefty, a former mini-tour legend (two-time Hooters tour player of the year!) who missed his first 24 cuts on the Web.com tour but more recently stared down Dustin Johnson in the final round of last year’s Pebble Beach Pro-Am and crushed him. At 10:40 a.m., Potter, the Prince of Ocala, pulled up a chair, cracked a Diet Coke and lamented the fact that lunch wasn’t yet being served.

The conversation with Potter turned out to be a lengthy one; he was unimpressed with the fact that I’d been to Zaxby’s in his hometown just the day before but interested in answering Martin’s queries as to how Potter had come back from a devastating ankle injury just two years ago. Imagine being a golfer in your 30s and suddenly breaking your front ankle, the one you rotate through, and then having to battle back up through the Web.com tour just to regain status — that’s what Potter has done. Respect.

Rain kept us inside and ushered a slew of other pros through, too: Paul Casey, Peter Uihlein, Chez Reavie, Sergio Garcia, plenty more, plus a handful of Tour officials and equipment reps who’d seemingly snuck through the same security I had. Dustin Johnson rolled through, too, in charge of a large salad and not looking particularly talkative. Of all the pros there, he had by far the most noticeable presence, even as he kept to himself. I suppose that makes sense for the world No. 1.

Eventually I made my way down to caddie registration, while Martin headed to the new PGA Tour performance truck for a workout. I’d initially been planning to grab my credential and head to the course for a stroll, but it turned out I needed Martin to vouch that I was, in fact, his caddie to grant me clearance. Suddenly I was stuck in the caddie room, rather like Tom Hanks in The Terminal: I couldn’t head to the course without a credential, nor could I get back in the building if I left. So I stayed and instantly got my fill of caddie flavor.

Of all the pros there, Dustin Johnson had by far the most noticeable presence, even as he kept to himself.

The traveling caddie herd has a fascinating dynamic. They were friendly and lively on Tuesday, greeting each other like old friends (they are old friends) and happily including me in table conversations. The atmosphere was collegial, warm, jovial. But the assembled seem to really hit their stride when it comes to rumors, complaints and opportunism. An example for each:

On rumors: “I heard he’s intentionally gonna stay on the Web tour so he can smoke weed during the rounds, ’cause they don’t test as much there.”

On complaints: “I officially hate my guy. Hate him. Cannot wait to get another bag.”

On opportunism: “Just a heads up — I heard Trainer does have a caddie, even though he hasn’t checked in. Some buddy of his.”

I ran the last one by Martin, when he returned from his workout. He was amused, but hardly surprised.

“When I won in Puerto Rico, I got 200-something texts congratulating me,” said Martin, who had won that week with a stand-in looper on his bag. “But I also heard from probably 20-30 caddies who I’ve never even met. That’s just kind of the way it goes.”

When I was finally credentialed and deemed official, I was given four things.

1. A choice of Valspar hats, either electric blue, deep purple or pale yellow. I
went yellow
2. A yardage book (more on these to come)
3. A document with last year’s pin positions (and where they’ll likely be cut again this year)
4. A voucher for a free can of paint — tint of my choosing! 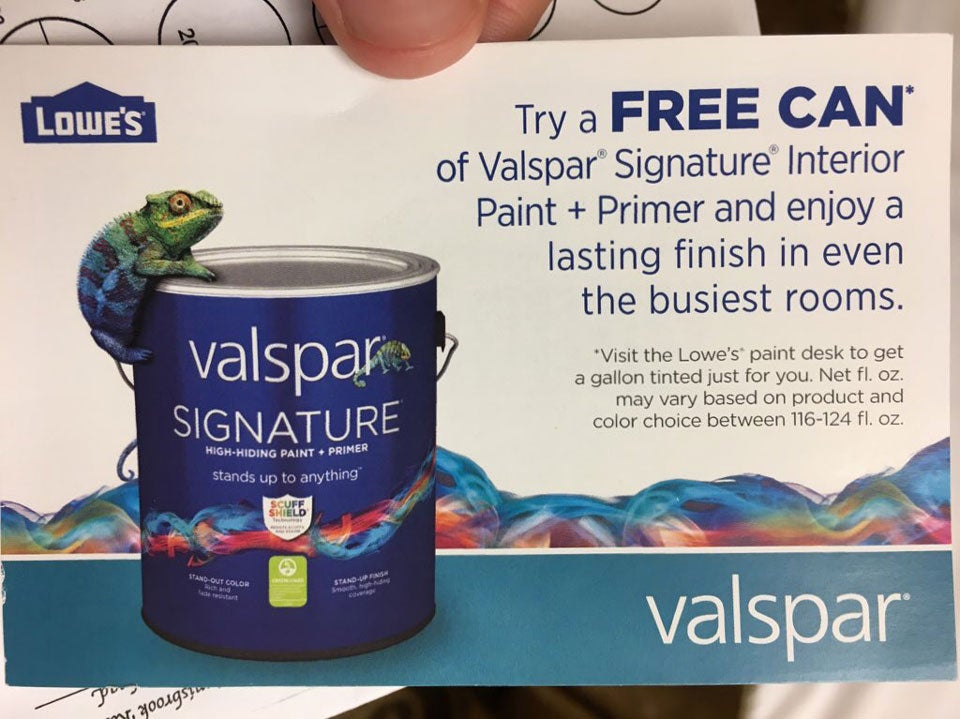 One of the perks of caddying at the Valspar this week: a voucher for some free paint!
Dylan Dethier

Ready to roll, we headed out to the course. I piloted the Srixon staff bag for the first time, but after hitting the short-game area Martin decided to tackle the back nine with just a wedge and a putter, making my job mercifully easier. The bag went back in the Lexus and we headed for the 10th tee.

Many golf fans, myself included, think of Tour practice rounds as venues for big-time wagering between top-tier players, the types of stories that Phil Mickelson has become famous for. But those kinds of money matches are largely the exception rather than the rule. Guys play so much tournament golf that many are looking to prep as efficiently as possible; that means hitting a bunch of short-game shots and plotting out the most likely places they’ll approach holes from. 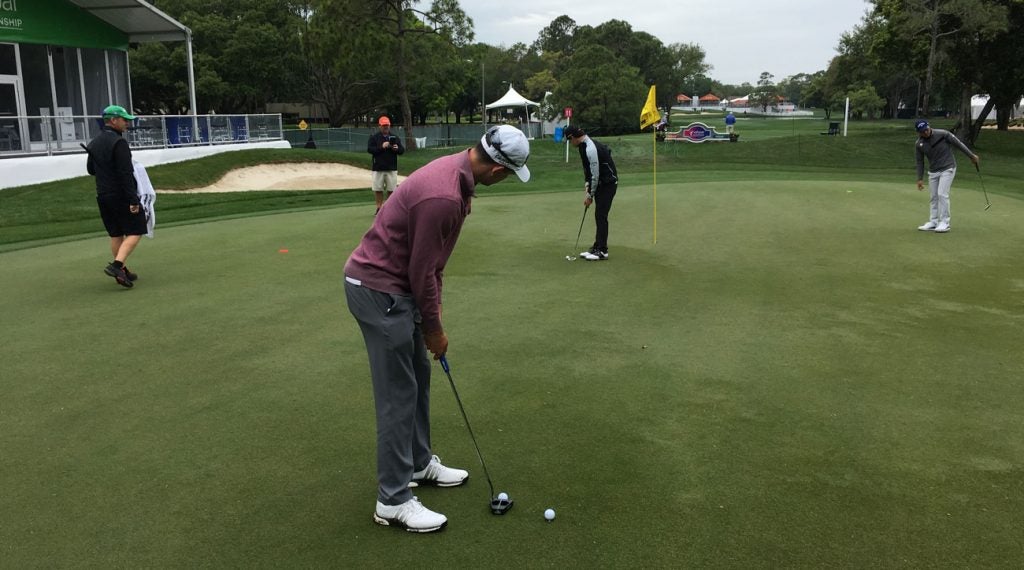 Getting in some reps before the Valspar Championship.
Dylan Dethier

Because Martin has never played Valspar’s Copperhead course, he was trying to figure out what clubs to hit where. Some were tricky, like the tee shot on the challenging 16th. But others he was far more certain of, like No. 18, where Tiger Woods drew criticism a year ago for hitting iron off the tee. “This is driver all day,” he said. 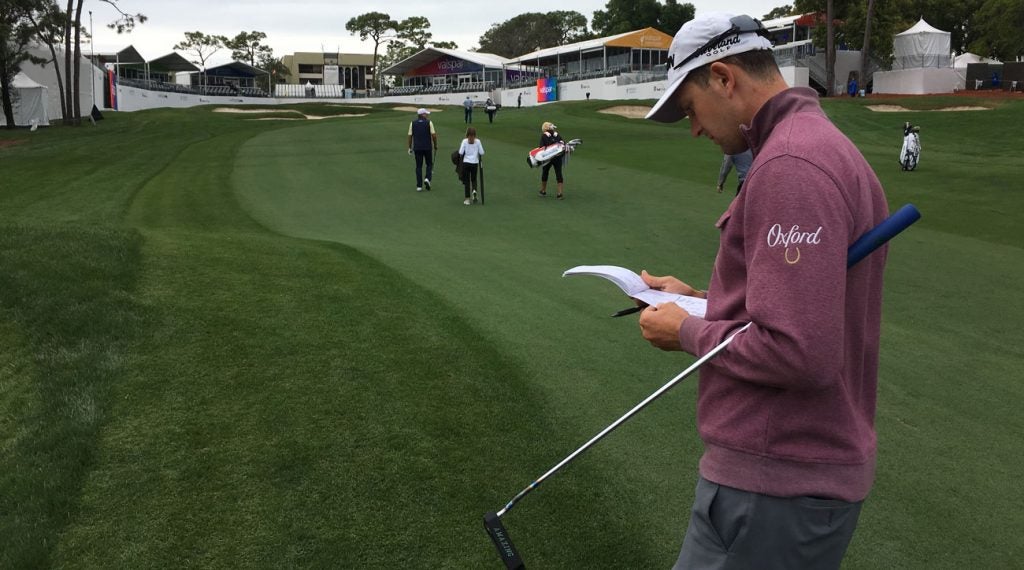 Trainer consults his yardage book at the Valspar Championship, with Steve Stricker and his wife and daughter in the background.
Dylan Dethier

Our day concluded by rolling through the Valspar’s pro-am party, held a quarter of a mile down the road from the clubhouse. Some players are obligated to appear at these, most steer well clear. But not Martin. I’m not sure if it’s a gratefulness to sponsors, a general curiosity about meeting people or just the free food, but he eagerly shows up to these sorts of events every week.

Through a day and a half on the caddie beat, I think that’s what impresses me the most about my player: his ability to go against the Tour grain, where there’s a certain amount of pressure to just fit in. But I will say, even as a Tour rookie he immediately became the belle of the ball at the pro-am soiree.

By the end of the night we’d chatted up a bunch of the tournament’s big-time sponsors and organizers and kicked it with Tampa Bay Buccaneers legend Ronde Barber. Martin even invited Miss Florida (the actual belle of the ball) to a country concert Saturday night.

Wednesday is pro-am day — just nine holes at this tournament — and Martin’s off at 10:57 a.m. That means an abbreviated trial run with the big staff bag in hand. It also means one day ’til gameday. 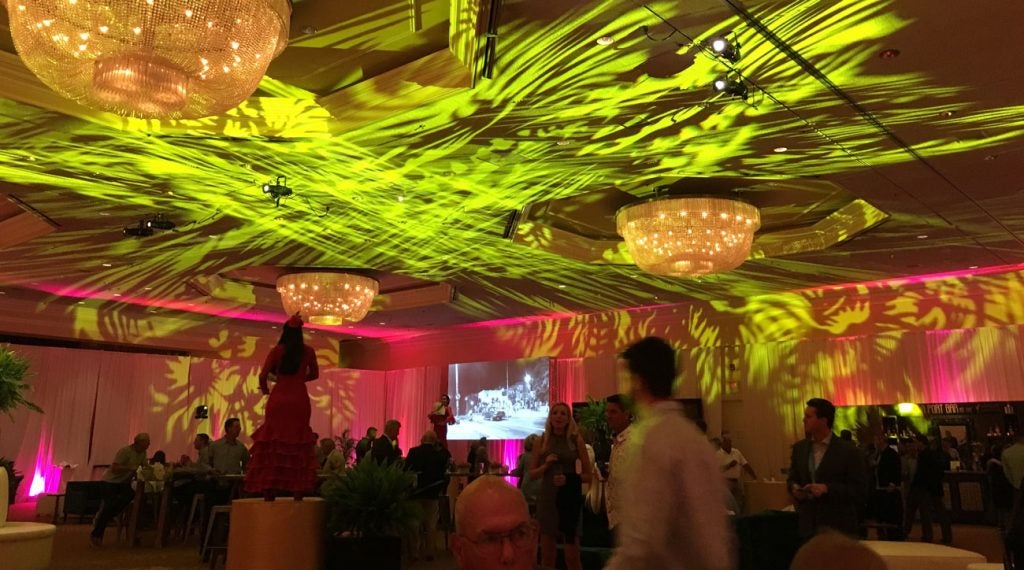 The pro-am party at the Valspar Championship was full of heavy-hitters.
Dylan Dethier