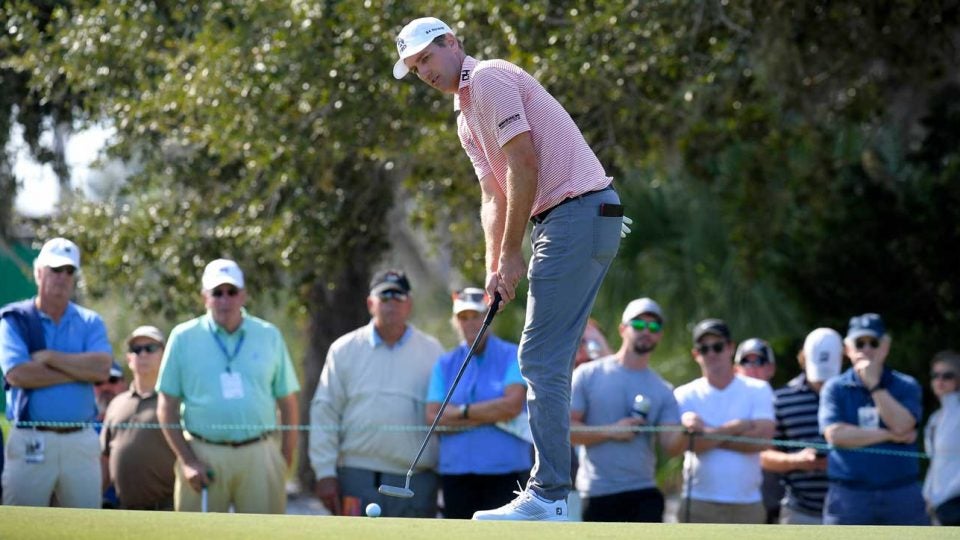 Brendon Todd putts during the third round of the 2019 RSM Classic.
Getty Images

In early October Brendon Todd had just missed his fourth-straight cut to open the season, and his career comeback seemed to be in doubt. Six weeks later, and Todd is staring down his third-straight PGA Tour victory with 18 holes to go at the 2019 RSM Classic.

The unquestionable hottest golfer on the planet continued his recent onslaught on Saturday, draining eight birdies on his way to a third-round 62 and, more importantly, a two-shot lead at Sea Island.

The 34-year-old Tour veteran’s hot streak began at the Bermuda Championship, where he finished 24 under for a four-shot victory in what was only his second-career win at the time. The Bermuda had a soft field as a result of the WGC-HSBC Champions (won by Rory McIlroy) being played the same week in China. His winner’s check was $540,000.

Todd quickly quieted any doubts about the quality of that win by storming to victory in his next start at the Mayakoba Golf Classic against a much stronger field. The win proved that Todd’s streak of hot play would not be a flash in the pan. It also earned him a much bigger winner’s check, to the tune of $1,296,000.

Tournaments
Why is there a massive overturned ship in the water at the RSM Classic?

Now just six days later, he’s back in a now-familiar position of leading on the PGA Tour. But a repeat of last week is no sure thing. To win on Sunday, he’ll have to get past a large group of competitors close behind. 2012 U.S. Open champion Webb Simpson sits just two shots back thanks to rounds of 65-68-63 over the first three days. Simpson is experiencing a career-renaissance of his own, having risen back to No. 12 in the world.

Tied with Simpson at 16 under is another former Tour winner, Sebastián Muñoz, with D.J. Trahan one more back at 15 under. But Todd didn’t just suddenly find his game on Saturday. He opened the tournament with matching rounds of 66 to put himself in contention (not to mention his two recent wins), so it’s unlikely he’ll surrender his lead easily.

Second-round leader Tyler Duncan, who shot an impressive 61 on Friday, couldn’t keep the good luck going on Saturday. He stalled at even par in the third round, but he’s still within striking distance four off Todd’s lead.

You can find full tee times for Sunday’s final round of the 2019 RSM Classic here.