Why is there a massive overturned ship in the water at the RSM Classic? 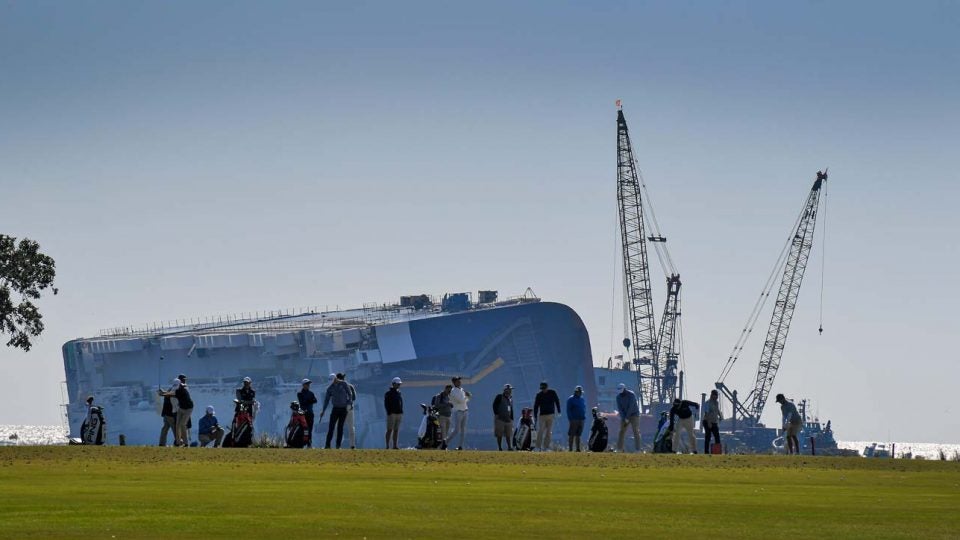 PGA Tour pros warm up on the range Wednesday with the massive capsized Golden Ray cargo ship looming in the background.
Getty Images

The PGA Tour is at beautiful Sea Island in Georgia this week for the 2019 RSM Classic. If you tune into the TV broadcast, you might see something looming in the background in the sea just off the course: a massive, overturned cargo ship. So what is it doing there?

The capsized ship is not a new aesthetic feature like you’d find on a mini golf course, it’s actually a real ship. On the morning of Sunday, September 9, the vessel, known as Golden Ray, caught fire and capsized just off the shore from St. Simons Island where Sea Island Resort and the RSM Classic are located.

The incident is still under investigation, but all 24 crew members were rescued safely. Four of those crew members were stuck on the ship for more than a day, but rescue personnel were eventually able to drill a hole in the hull and escort them to safety, according to Action News Jax.

The vehicle-carrying ship flipped on its side shortly after leaving the nearby port of Brunswick, Georgia. It was carrying an incredible 4,000 vehicles at the time of the incident.

WOW: Look st this view of the overturned cargo ship in St.Simons Sound. Hundreds of crew memebera out here working to lessen environmental impacts from the #GoldenRay. @ActionNewsJax @WOKVNews pic.twitter.com/4RLWg3qIN7

The Port of Brunswick could reopen today after this capsized #GoldenRay ship forced it to shut down.

According to wgxa.tv, authorities determined that “it’s not possible to safely right and re-float the Golden Ray fully intact.” So instead salvage crews will have to dismantle the ship and remove it from the water piece by piece. In the meantime, they are removing hundreds of thousands of gallons of fuel to prevent it from leaking into the ocean. In October, the Coast Guard reported that they had also recovered about 500 gallons of oily waste from the water after the capsizing.

The recovery process will take a long time, and until then golfers enjoying the courses at Sea Island will have the ship as a backdrop. It will certainly make for some interesting photographs of this year’s RSM Classic.