The 1989 Masters, where Seve was denied a free drop, Hoch rhymed with choke and Faldo shot a glorious Sunday 65 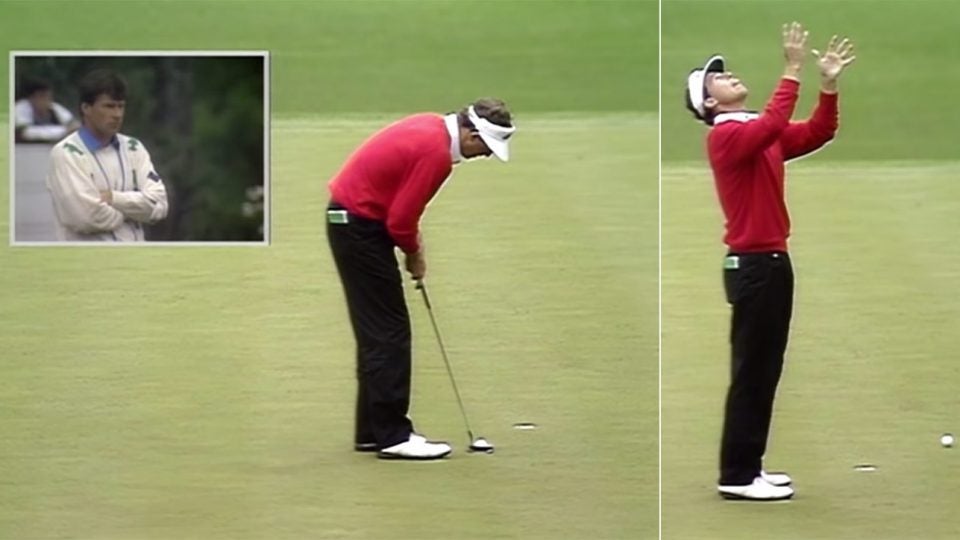 Scott Hoch's miss on the first playoff hole is one of the biggest flubs in Masters history.
Youtube.com

The year is … 1989 and Augusta National is soaked. It has been raining for days.

The field is wearing sweaters because it’s a chilly 61 degrees at The National. Later today we’ll see players’ breath as they exhale. If only that was the weirdest thing about the 1989 Masters.

Join us here at GOLF.com for A Pod Unlike Any Other, where we continue breaking down the most famous final rounds in Masters history. Subscribe to our podcast by clicking the banner below, and scroll down for the director’s cut on things you gotta see.

THINGS YOU MUST SEE

Sunday of Masters week is Seve Ballesteros’ 32nd birthday. He blisters the front nine in 31. He’s the No. 1 player in the world and clearly the favorite to sweep through Augusta’s back nine and win his third green jacket. A man atop the golf world, completely in control, until Ken Green says no.

At the 30:30 mark of the final round broadcast, Seve is looking for relief from mud — ANGC had a local rule of “unusal damage” — left of the 10th fairway. The first rules official is about to give Seve exactly what he wants, a better lie, until Green trots over from the fairway and takes issue with it. Green had a similar situation on the 2nd hole and takes major issue with Ballesteros. He’s protecting the field! Well, Seve in all his swindling magic asks for a second ruling, doesn’t get it and has to lay up. He would bogey the 10th hole and make zero birdies until the 18th, when it no longer mattered. Here’s to you, Ken Green! 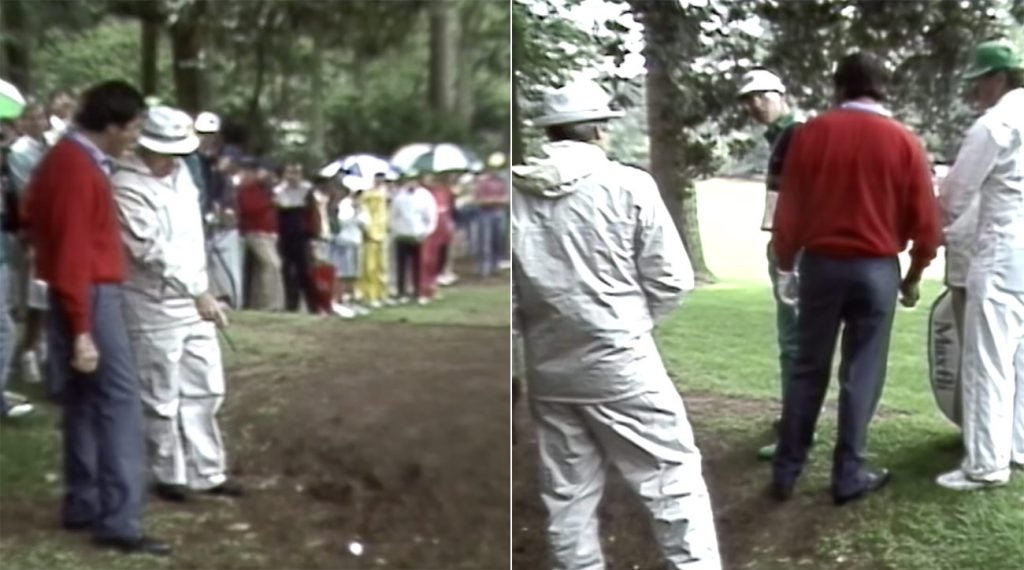 Seve Ballesteros did all he could to get a favorable ruling left of the 10th fairway, but Ken Green called him out for it.
Youtube.com

2. The graphics package is straight out of Pac Man

As pointed out in our podcast by senior writer Alan Shipnuck, there is little added to the broadcast by the graphics used on screen. Very often the yardages were rounded to an approximate distance, like in the photo below, where 10s and 5s are used almost ubiquitously. If you didn’t see Greg Norman in the upper corner, you’d think you were in the middle of a golf video game. 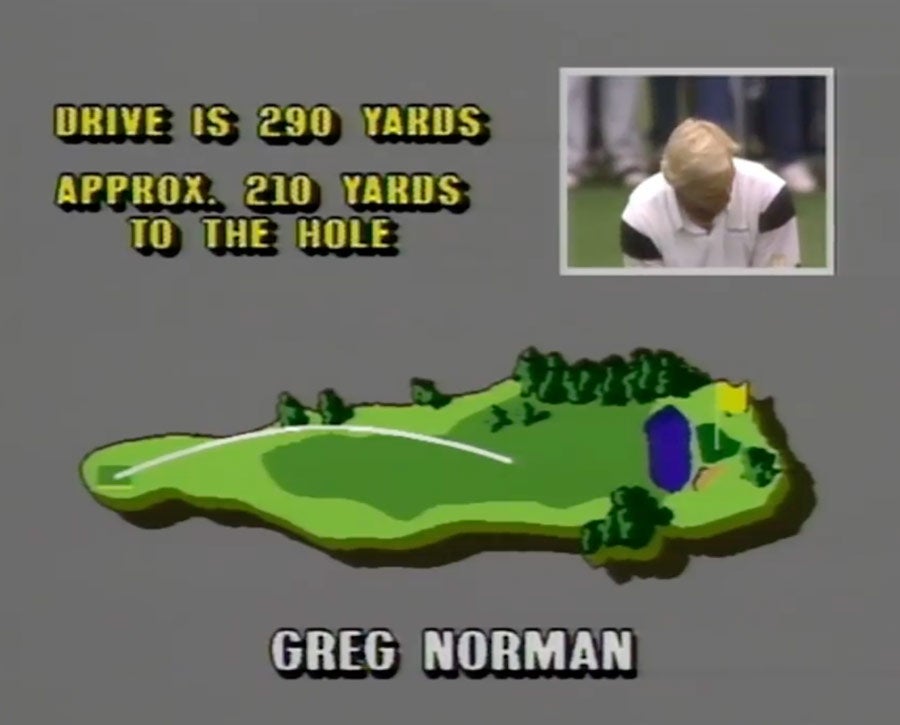 The shot-tracking graphics during the 1989 Masters final round broadcast were a bit analog.
Youtube.com

It was a brutal parenthetical by Sports Illustrated in its recap of the 1989 Masters, but it was absolutely true. Scott Hoch has something he likely dreamed of his entire life: a 3-footer to win the Masters. It’s hard to be sure, but the putt may have even been less than three feet. “24 inches from a green coat,” Ken Venturi said at the time.

Faldo had made his five, for bogey. Hoch sizes up the winning putt from every angle.

It doesn’t even touch the cup. 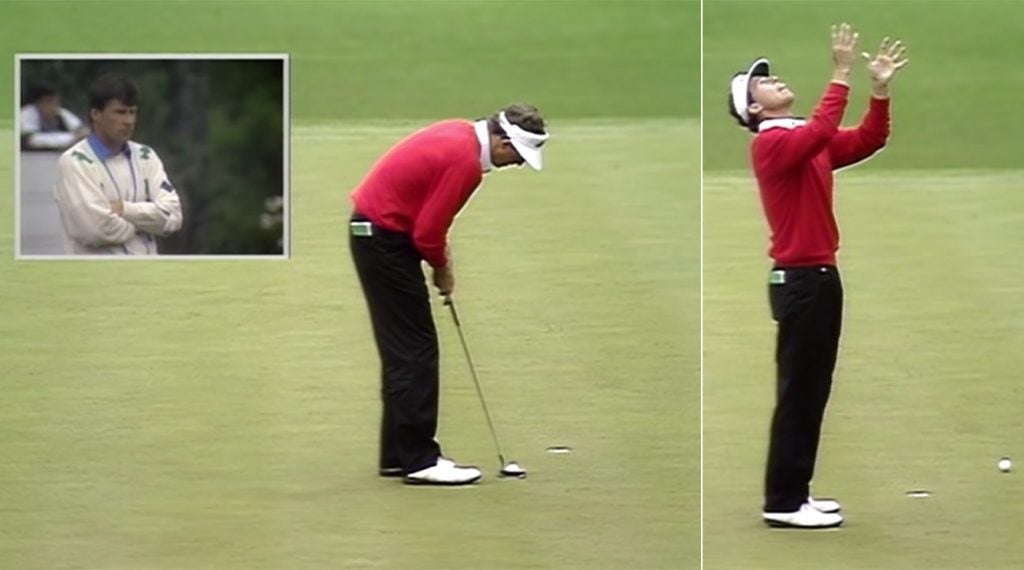 Scott Hoch's miss on the first playoff hole is one of the biggest flubs in Masters history.
Youtube.com

For more great moments we noticed rewatching the Masters, subscribe and check out A Pod Unlike Any Other on iTunes, Spotify, Soundcloud or wherever you listen to podcasts. We’ll continue bringing you new episodes each week!