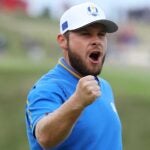 Tyrrell Hatton on Friday, after his putt on the 18th hole at Whistling Straits that won Europe a half-point.

Day one at the Ryder Cup at Whistling Straits is complete, and the U.S. has jumped to a 6-2 lead, its biggest first-day lead since 1975 (when it led 5-1). The Americans, behind three wins, jumped out to a 3-1 lead after morning foursomes, then won two and halved two in the afternoon four-ball. Among the stars for the U.S. were Dustin Johnson and Xander Schauffele, who won two points apiece, while world No. 1 Jon Rahm won 1.5 points for the Euros. Let’s cut right to it: What has to happen for Europe to rally?

Sean Zak, senior editor (@sean_zak): Not much really. Just pick away at the lead. Win the morning session by any margin, and this thing tightens. That half-point from Rahm and Hatton was like a lightning bolt for that squad. Might not come across that way on TV. They’ll be ready to go Saturday morning.

Alan Bastable, executive editor (@alan_bastable): Yep, key will be not trying to do too much. I think cutting the lead to three is a worthy goal. That feels surmountable come Sunday. Three-and-half or more feels like too steep a hill to climb. Also need to get the stalwarts back on track: Poults, Westy and Rory need some points, or this thing could go sideways quickly.

Jessica Marksbury, multimedia editor (@jess_marksbury): Hate to be cliche, but I think “just play better” applies here. The Euros — other than Jon Rahm and Sergio Garcia’s electric pairing — just seemed a little flat. Their putts burned the edge, the Americans’ went in. And totally agree with you, Alan. The European veterans need to step up. Rory’s performance was a big blow. Ultimately, Team USA came into this week looking SO strong on paper, and after seeing them all in action today, it’s hard to imagine a scenario in which they fail to bring this home.

James Colgan, assistant editor (@jamescolgan26): Seems we’re one flipped script in either the morning or afternoon session tomorrow from entering Sunday with a brand-new ballgame. As for how the Europeans will go about doing that, getting anything out of Rory McIlroy and Matt Fitzpatrick would go a long way. Ditto Paul Casey and Bernd Wiesberger.

Josh Sens, senior writer (@JoshSens): Putts need to start dropping for the likes of Hovland, Casey and Westwood. And Poulter needs to bring something more than a glare. But it’s hard to overstate how much they need Rory to get his groove on. Lastly, if I were Harrington, I’m not sure I’d sit Sergio again.

Nick Piastowski, senior editor (@nickpia): Split the day, hope the Americans get caught sleeping and pull off the Wonder at Whistling (trademark) on Sunday. For tomorrow, ride Rahm, hope Hatton stays hot and run out Sergio out in both sessions, along with maybe catching one or two other breaks.

Pro wanted to be 'sexiest golfer.' PGA Tour granted him his wish.