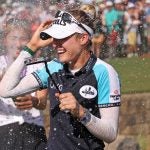 Check in every week for the unfiltered opinions of our writers and editors as they break down the hottest topics in the sport, and join the conversation by tweeting us @golf_com. This week, we discuss Nelly Korda’s breakthrough major win, pace-of-play enforcement and Brooks Koepka’s focus.

Nelly Korda won her first major Sunday at the KPMG Women’s PGA Championship, cruising to a four-shot victory at Atlanta Athletic Club. With the title — her third of 2021 — Korda will supplant Jin Young Ko as world No. 1. In your mind, is Korda the world’s best player?

Josh Sens, senior writer (@joshsens): She is playing like it right now. And that combination of power and touch makes it no fluke. Scary thing for the competition is, she might not have peaked yet.

Dylan Dethier, senior writer (@dylan_dethier): Yes. Power, touch, and what she calls “blacking out” which I take to mean whatever allows her to reel off eight birdies in a row. That’s a special X-factor that the rest of the world is jealous of. I also can only imagine the relief she feels to actually win a major rather than descend any further into best-player-without-one land. That pressure seems like no fun.

Alan Bastable, executive editor (@alan_bastable): Meh, she’s only 22! How do you think Phil Mickelson felt carrying that mantle for a decade-plus?! What a magical run for Korda, though — in her last two starts alone she’s a cumulative 44 under par. I remain in awe that two sisters could be so exceptional at a single discipline. This week did nothing to temper that awe.

How much impact do you suppose Korda — who is the first U.S. major winner in the women’s game since Angela Stanford at the 2018 Evian Championship — can have in terms of driving more American fans to the game?

Sens: It can’t hurt. But the women’s game is always going to fall short in that kind of comparison with the men’s game, which is a shame because, as has been noted many times, their games are more relatable and the players are so much more approachable. Go to an LPGA event just once and it’s hard not to get hooked.

Dethier: She’s a terrific American superstar for the LPGA. What’s unbelievable is that Korda is just 22 years old, which means she has her entire career ahead of her — but she’s already a seasoned vet, too. She also seems remarkably well-adjusted to the competitive spotlight, perhaps because she stayed (relatively) low-profile when compared to someone like Michelle Wie or Lexi Thompson. We’ll get to know her better as she sticks around the top of the game for years to come.

Bastable: Nelly’s fan impact to a large degree will be up to Nelly. As Dylan notes, she has a chill demeanor — which no doubt is a huge plus on the course — and doesn’t appear hungry for attention. Her game, in particular her length, is wildly appealing but she’ll never be the LPGA’s version of Bryson. It’s not in her DNA.

Slow play reared its ugly head again at the Women’s PGA when Maria Fassi was penalized two strokes for taking too long to play a shot — rule 5.6b(3) — in the second round, which ultimately cost her a weekend tee time. Fassi didn’t question that she had exceeded the allotted time but she also suggested the slow pace of her playing partners didn’t help matters and generally was frustrated that officials dinged her. What was your read of the situation?

Sens: There’s a long history in golf of faster players suffering alongside slugs, and I feel for Fassi in that respect. But she took too long on the shot. Rules are rules, and they should be enforced more rigidly when it comes to the plague of slow play.

Dethier: It would be extremely frustrating just because the rule has been enforced so inconsistently, so I can’t blame her for that reaction, especially when it cost her such an important couple shots. But clearly something needs to be done to speed up play, which means starting somewhere, which means inevitable messy situations like this one. Kudos to officials for taking it seriously, even if the details of how it played out are less than ideal.

Bastable: It was a tough scene, for sure, but in some ways the bigger the stage upon which these penalties are doled out, the better. The players need to know that slow play is a weight on the game that must be strictly policed. Regardless of the gravity of the moment, a zero-tolerance policy is the only way out.

Harris English won the Travelers Championship after defeating Kramer Hickok on the eighth (!) hole of a sudden-death playoff that bounced between two holes (18 and 17). The lengthy bonus session gave us plenty of time to ponder the PGA Tour’s playoff format. Is there any way to improve it?

Sens: I realize it could present logistic challenges, but I would do away with repeating the same hole or two holes over and over. That’s a whole lot of dull.

Dethier: Even English agreed they should have flipped over to the nearby 15th hole. The format doesn’t bother me because it so rarely goes this long, but yes — you need an emergency lever to change up the fourth and fifth playoff holes and on.

Bastable: What needs fixing?! That was the most memorable finish of the year! In the spirit of Confidential, however, I’ll offer this: be fun to let the players pick the holes they play. After a coin toss, Player A picks first, Player B goes next, and so on. Would bring a little more strategy into play.

After tying for fifth at the Travelers Championship, Brooks Koepka said that he has trouble mentally locking in at regular Tour stops.  “A major I get excited and I feel stuff on the first tee,” he said. “I just struggle to do that in regular events. The focus and discipline is there in a major, where it’s not here. I kind of go for everything.” Credit to Koepka for his honesty, but what do you make of his majors-or-bust mentality?

Sens: It’s a reflection of a broader problem that the Tour is dealing with. Fans have a harder time getting interested in certain events, too. Beyond that, we’ve always known that these guys are ridiculously pampered and privileged. Imagine if the rest of us could approach our jobs like that, picking and choosing when we get to try our best?

Dethier: It may be honest and it may be true, but it’s still an excuse. If Koepka wants to be considered the best player in the world, he needs to learn to turn it on even when he doesn’t feel like it. I say this in full awe of his ability to flip the switch at major championships, but it’s interesting that even though he seems aware of the problem, he can’t quite address it. With that said, he finished T5 this week so the “problem” may be overstated to begin with.

Bastable: Did Sens give his best effort in that answer? Perhaps a question for a future roundtable. Yeah, Dylan nailed it — it does sound like a convenient out for Brooks’ off-rounds. Also, it’s a remarkable thing to hear a Tour pro say. Imagine Tiger showing up to an event and admitting he wasn’t feeling inspired enough to bring his best stuff. When a peg goes in the ground, every player’s mission should be the same: win.

English’s win was his second of 2021, doubling his career win total on Tour. Which player on the PGA Tour or LPGA Tour has most surprised you this year?

Sens: It’s started prior to 2021, but Francesco Molinari continues to be something of an enigma. Remember when he was a world-beater, on the verge of winning his second major. Amazing what a rinsed shot or two in Rae’s Creek can do to a man’s psyche.

Bastable: I do, yes. I also remember Will Zalatoris burning up Tour leaderboards, including a runner-up finish at the Masters, which this time last year I’m not sure many people saw coming. Tip o’ the cap also to Lydia Ko, who was scrambling for answers when the calendar flipped to 2021. She found them and has climbed all the way back to top-10 in the world.