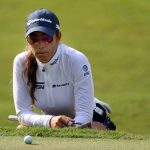 JOHNS CREEK, Ga. — Maria Fassi was assessed a slow-play penalty during the second round of the KPMG Women’s PGA Championship, and the consequences could be disastrous. Fassi shot five-over 77 in Round 2 at Atlanta Athletic Club, and currently sits one shot outside the projected cut line.

The penalty occurred on No. 18 as Fassi played her second shot. She had 180 yards into a green protected by water and was stuck between clubs. As a result, she took 50 seconds to play her approach.

“It’s not an easy decision,” Fassi said about her shot into the green. “I was going for the green in two, the wind was changing, I was in between clubs. It wasn’t a stock number that was a no-brainer.”

Fassi conceded that she did take more time than was allotted on her second shot, but she wished there was some “common sense” in the application of the rule.

A rules official informed Fassi of the penalty as her group made the turn to No. 1 (they started on No. 10). Fassi admitted that the penalty took her out of her game and that she had tears in her eyes out of frustration as she played the 1st hole.

The 23-year-old shot three-over 39 on her last nine holes — including a bogey at No. 9 — to bump her outside the projected cut line.

The Women’s PGA Championship rules committee released the following statement after the infraction:

“Fassi was in breach of Rule 5.6 while being timed by a member of the Rules Committee. She exceeded the average amount of allotted time for the total strokes taken on Hole #18. The KPMG Women’s PGA Championship Rules Committee has adopted a Pace of Play Policy under Rule 5.6b(3) of the Rules of Golf to encourage and enforce prompt play.“

Fassi attempted to contest the penalty in the scoring area, but the rules official didn’t budge.

“It was a waste of time to keep arguing,” she said. “I just don’t think that I deserved it.”

This is the second time in the past month that a controversial slow-play penalty has embroiled a women’s event. At the Bank of Hope LPGA Match Play hosted by Shadow Creek in late May, Carlota Ciganda was assessed a slow-play penalty on the 18th hole that resulted in her losing her match against Sarah Schmelzel.

In addition, rookie Yealimi Noh was hit with a massive $10,000 fine for egregious slow play at the Kia Classic earlier this season.

Fassi was resigned to her penalty as she spoke to reporters after the round, but she indicated she hoped the rule will be reformed in the future.

“I guess it’s a lesson learned,” Fassi said. “It won’t happen again, that’s for sure.”

Update: The cut at the KPMG Women’s PGA came at two-over par. Fassi missed the cut by one shot.