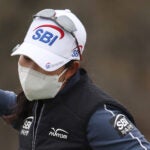 A Lim Kim celebrates her birdie on the 18th hole at Champions Golf Club on Monday.

Check in every week for the unfiltered opinions of our writers and editors as they break down the hottest topics in the sport, and join the conversation by tweeting us @golf_com. This week, we discuss A Lim Kim’s victory at the U.S. Women’s Open, mud balls, this week’s PNC Championship with Team Woods, and more.

1. With three birdies over her final three holes, A Lim Kim won the U.S. Women’s Open, the final major of the year. Down five strokes to start the day, Kim shot a four-under 67 in Monday’s rain-delayed final round, winning by one over Amy Olson and world No. 1 Jin Young Ko. Put Kim’s 2-3-3 finish in historical perspective.

Alan Shipnuck, senior writer (@AlanShipnuck): I give it the highest praise: Schwartzelesque.

Josh Sens, senior writer (@JoshSens): It was nails, all the more so when you consider how tough the course was playing. Only one other player in the top 10 was under par for the day.

Zephyr Melton, assistant editor (@zephyrmelton): Pretty spectacular. That course was breathing some serious fire on the weekend, and on Monday, it was playing with a bone-chilling northern wind. No other player played that three-hole stretch in 2-3-3 this week, making it all the more impressive. Gotta rank up there with some of the best finishes of all time.

James Colgan, assistant editor (@jamescolgan26): I’ll raise Shipnuck — Kim’s performance was Brysonesque. OK, not in the literal sense, but a brilliant final-round performance in a national championship while the rest of the field stumbles? We’ve seen that already this year.

Dylan Dethier, senior writer (@dylan_dethier): All correct — but what struck me about Kim’s fiery finish was how it came from completely off the radar. NBC’s Will Gray was in touch with PointsBets Sportsbook, which listed Kim as a 66-1 underdog at the beginning of the day on Monday. They didn’t take a single bet on her. Not one!

2. Kim became the second non-LPGA member after Sophia Popov (AIG Women’s Open) to win a major this year. What does that tell you about the strength of talent in other corners of the women’s game?

Shipnuck: As with every level of golf, the depth is nuts. And don’t forget the Dinah Shore was also won by a woman (Mirim Lee) who makes only cameos in the U.S.

Sens: What Alan said. Crazy deep and global, though there’s no doubting the power center. At what point will we get a spin on the Solheim Cup: South Korea vs the world?

Melton: Women’s golf is seriously well represented internationally, and the KLPGA has some crazy-good depth. It’s always fun when other sports leagues around the world stand up — and even surpass — the talent that comes from the U.S.

Colgan: Remember Will Zalatoris at Winged Foot? Who says it’s just the women’s game? As far as I’m concerned, gone are the days of card-carrying Tour members creating a de facto barrier to entry at the sport’s major championships. That’s a great thing, not a good one, for golf.

Dethier: I remember looking at the leaderboard at the end of Friday and wondering when the last LPGA Tour event was without any South Korean women in the top 10 at the halfway mark. That was clearly temporary — four South Korean women finished in the top six by week’s end. The KLPGA is absolutely chock-full of talented golfers. (Sidenote: Seven Swedish women made the cut this week. Seven! If that’s Annika Sorenstam’s legacy, it’s an impressive one.)

3. Soggy conditions later in the week at Champions GC led to mud balls during Saturday’s third round and also Monday’s final round. Lift, clean and place was not in play, and players were critical both days. “It’s frustrating,” Bronte Law said Monday. “It’s a great golf course, tough setup, the pins were tucked and the added element of mud balls. … Everyone is going through it, [but] I do think that it then ends up being who had the fewest mud balls as opposed to being who played the best golf.” Preferred lies at a major — something some players also lobbied for at the 2020 Masters — would rankle traditionalists, but given the outcry from players, should an exception have been made this week?

Shipnuck: Yes, it should have. The point of these tournaments is to identify the best golfer, and mud balls actually penalize you for hitting fairways and introduce too much luck into the game.

Sens: No. I appreciate Alan’s point but wonder how much of a factor these mud balls really were. They get a lot of attention, but I suspect a Mark Broadie-style analysis would show that they didn’t have as big an influence on results as they might have appeared, except in the way they got into certain players’ heads. And besides, dealing with bad breaks is a skill, too.

Melton: Yes, it should have. After the torrential downpours on Friday and Sunday, the course was EXTREMELY saturated. It made for some ugly shots and bad golf. A number of players told me throughout the weekend that they’ve never seen that many mud balls in all their years of competitive golf. When it gets that soggy, to hell with the traditionalists. Golf needs to be more malleable.

Colgan: Nope. Every major champion posits a portion of their win to luck, and part of the fun of the majors is their sheer unpredictability. Why alter the playing field so as to remove that?

Dethier: Blech. Preferred lies are terrible. I totally sympathize with the players not wanting mud balls, and Shippy is completely right that you shouldn’t be punished for hitting the fairway, but I’m with Colgan on this one. Whenever possible, play the ball down.

4. There seemed to be additional attention/buzz around this Women’s Open, in part because the championship didn’t have to compete with an official PGA Tour event. The jury is still out on TV ratings, but might an “off-season” major make sense as a permanent add to the LPGA calendar?

Shipnuck: Definitely, and as I’ve typed a million times, the LPGA should play its events Saturday-Tuesday. Why compete against more popular products when you could have the stage to yourself?

Sens: Sure, or, if the tricky logistics could be worked out, more women’s and men’s majors played back to back on the same venue, as at Pinehurst. Part of the buzz around that year’s U.S. Women’s Open had to do with Michelle Wie winning. But there was also a lot of interest from the back-to-back scheduling alone.

Melton: I’d be all for it. This was my second women’s major of 2020, and I’m falling more and more in love with the women’s game. They have a play style that is more relatable to the average golfer, and that alone is enough intrigue for me. Add in the awesome personalities that are out there, and you’ve got the ingredients for a seriously sweet product.

Colgan: Seems like a no-brainer to me, and while you’re at it, let’s adjust the schedule for a Monday finish. Enough of golf trying to battle it out with the NFL for ratings — it’s a losing battle 10 times out of 10.

Dethier: It makes literally zero sense for golf to try to compete with the NFL by putting final rounds on Sundays in the heart of football season. Even the Masters had a hard time keeping up! So if you’ve got a marquee golf event in the fall, it makes a ton of sense to me that you’d want to shift it to stagger the finish to a weekday, when we can all collectively put it on the screen in the background at work. (Or, in our case, in the foreground, because watching it is part of work, but you get the idea.)

5. It’s PNC Championship week, notable this year for two newcomers to the event: Tiger Woods and his, 11-year-old son Charlie. Which part of Charlie’s game — and/or the overall father-son dynamic — are you most intrigued to check out?

Shipnuck: I’m looking forward to the trash talk; supposedly Charlie has quite the needle. But it will certainly be fascinating to see Tiger in this new context.

Sens: Is he as cold-hearted as his father in the clutch?

Melton: Dad-Tiger is best Tiger. Can’t wait to see his human side a little more.

Colgan: If you’ve watched (LeBron’s son) Bronny James’ AAU highlights, you know exactly what I’m excited about. Does Charlie swagger like his dad? I can’t wait to see.

Dethier: I’m looking forward to everyone having an extremely measured response to Tiger Woods’ son playing golf. Hah — just kidding, half the internet will be giving him a dozen majors come Saturday afternoon. But I am genuinely excited to watch Tiger and Charlie interact. I talked to Derrick Payne, who caddied in the Woods group in a local junior event in Florida, and was glowing about their dynamic. It’ll be enlightening to see them compete together.

6. Michael Jordan’s golf course, The Grove XXIII in Hobe Sound, Fla., made waves last week when a video of its snack service made the rounds on social media: The club delivers food and drink to golfers by way of drone. What’s the most lavish/over-the-top perk you’ve encountered at a golf course?

Shipnuck: Probably the lobster at National Golf Links — when you sit down for lunch, instead of bringing bread and butter, a big-ass lobster gets plopped on your plate.

Sens: I was at a fancy course in Cabo a few years ago where they gave you a choice of the brand of golf ball you wanted to hit on the range. Four or five options. Turns out I stink with all of them.

Melton: Played a course down here in Texas last week that had a bar-b-que smoker on the 10th tee waiting to dole out brisket tacos. Not a bad way to make the turn.

Colgan: I’m not one for particularly lavish golf clubs, but there’s something to be said for a series of well-placed water coolers and a strong craft beer selection. I hear some of the nicest places even give out divot tools … maybe one day.

Dethier: This isn’t quite what’s demanded by the question, but once you finish 36 holes at Bandon Dunes, your third round of the day is on the house. What’s a better perk than a free loop at one of the dreamiest golf sites in the country? Running around Pacific Dunes at sunset (for free!) remains among my fondest golf memories.