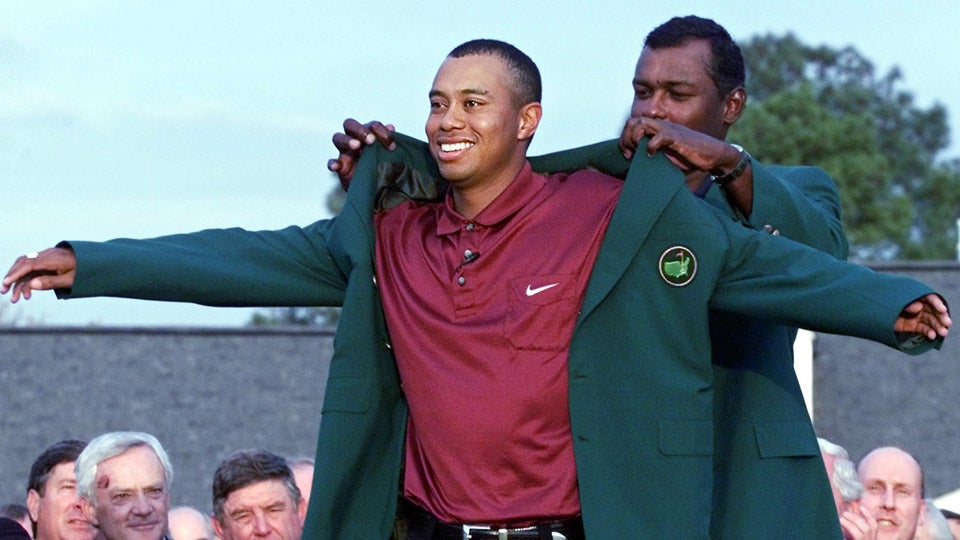 Tiger Woods gets his second green jacket from 2000 Masters Champion Vijay Singh on April 08, 2001 during the final round of the 2001 Masters at the Augusta National Golf Club.

There were plenty of nicknames for a Grand Slam that was or wasn’t a Grand Slam, depending on whether you were a golf traditionalist who lived by the calendar or simply a golf fan who marveled at four major championship wins in a row.

The losers in the naming derby included Phi Slamma Granda, Thai Slamma Granda, Fiscal-Year Slam, Major Sweep and, courtesy of legendary golf scribe Dan Jenkins, the Mulligan Slam (since Tiger needed a second try at the Masters to complete this Slam) and the Woods Wins Quartet, a bridge (and a pun) too far.

The phrase “Tiger Slam” eventually stuck, and it was a fitting way to describe the unthinkable. When Tiger Woods won the 2001 Masters, he completed an unparalleled run through golf’s greatest championships. For the next two months, all four of golf’s major trophies would sit on Tiger’s mantel.

Duval finished second at this historic Masters, two shots behind Woods, whose winning score of 16 under par was only two strokes off the tournament record he had set in 1997. Mickelson was three back.

Mickelson and Duval saw their hopes fade Sunday with costly errors at the par-3 16th. Duval flew it over the green and made bogey. Mickelson later said he pulled his 7-iron shot, but some observers thought he simply was unable or unwilling to go against his natural left-to-right shot shape and that ball spin was what caused his shot to stay up on the slope above the back-left pin location. A right-to-left shot, not in Phil’s repertoire, almost certainly would have spun down to the hole. Phil’s first putt raced past the cup and he three-putted for a bogey.

Woods birdied the 18th hole to cap a remarkable run and the Grand-Tiger-Mulligan Slam, whatever you wanted to call it.

“To win four in succession, that’s hard to believe,” Woods said. “On top of that, you’ve got to have some luck.”

CBS announcer Jim Nantz made the call as Tiger finished, and he kept the terminology bland: “There it is! As good as it gets! Tiger has his Slam!”

At the Masters award ceremony, Augusta National chairman Hootie Johnson summed it up best while, like Nantz, deftly avoiding any naming controversy. “We have witnessed the greatest golfing feat of our time,” Johnson said.

That was one thing we could all agree on.