Why Tiger Woods wants this tournament more than anything

LOS ANGELES — For Tiger Woods, this one matters more than most.

But it goes on. There’s the location: Sure, Woods isn’t quite from L.A., but for a Southern California kid, Riviera Country Club is as close as he can get to the ol’ stomping grounds in Cypress, Calif. During the in-between moments, he smiles at the Dodgers hats in the crowd. “I’m in my hometown,” he says.

There’s the golf course: Riviera Country Club isn’t just the place his father Earl would bring him to watch the L.A. Open as a kid; it’s the place where Woods made his PGA Tour debut at age 16. (Still a kid, it’s worth pointing out.) Woods is 0-for-13 at Riviera, his worst record at any regular Tour stop. He doesn’t putt well here, he says, though he’s not sure why. “I still haven’t quite figured that out,” he says.

There’s the timing, too: There are reminders of Kobe Bryant everywhere. Purple-and-gold jerseys. The “8” flag, adorned in Lakers colors. Bryant and Woods were friends, and they were the same age, and they had more in common than Woods has been able to say.

“I’m sure like a lot of people, it’s hard to put into words, you know, what transpired, and the fact that it’s a reality. Part of me thinks that it’s not real,” he said.

Finally, there’s the fact that every tournament matters a little extra to Woods these days. The 44-year-old looked stiff walking around the clubhouse on Monday and Tuesday of tournament week — and he hardly practiced either day. He looked better during his Wednesday pro-am round, although a 6:40 a.m. tee time requires a 4 a.m. wakeup, even when none of the strokes count. This isn’t just “warming up.” We’re talking Before and After transformations.

Thursday he looked even better yet. Temperatures had climbed into the 60s by the time Woods emerged to warm up, and he worked his way through a comprehensive range session. Smooth wedges. Piercing irons. Well-shaped drivers. A stinger, then a high draw, then a low cut, mimicking tee shots he’d see on the course. Later, he’d say that he was “piecing it together” on the range, but only he’d have known that at the time. From the outside, Woods looked locked in.

The only thing that interrupted his work was one Titleist that came skittering past his fresh Nikes, making him flinch, then smirk. Steve Stricker was laughing from four stalls away. There are only a handful of guys on Tour who would dare chip a golf ball in Tiger Woods’ direction while he’s warming up for an important golf tournament, but Stricker’s one of them.

“I hit it a skinny, too,” the Ryder Cup captain said, sheepishly. The warning shot had come a little closer than he intended. 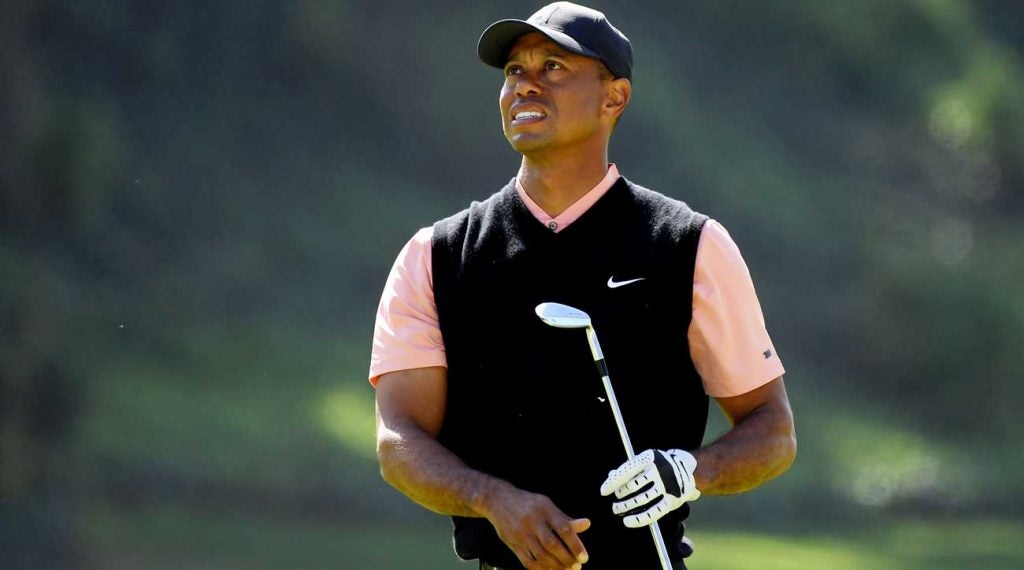 Tiger Woods wants to win every tournament — but he wants this year's Genesis Invitational even more.
Getty Images

No harm, no foul, because for the next two-plus hours, Woods could do no wrong. He hit a piercing 3-wood off the first tee that finished ever so perfectly at the end of the fairway, setting up a mid-iron that he hit directly over the flag, which in turn set up a 25-footer that fell ever-so-perfectly into the center of the cup for an opening eagle 3. He flagged his approach at No. 2, too, though he missed that. He needed an up-and-down at No. 4, but he made that. He flagged two more, at No. 5 and No. 8, leading to kick-in birdies each time. Woods was 4-under, T2.

Putting on a show. 🐦@TigerWoods is now T2 @TheGenesisInv after a birdie at 8.#QuickHits pic.twitter.com/VfPpuih4YS

It’s hard to explain why, but everything changed as Woods made the turn. He settled for disappointing pars at the scoreable 10th and 11th. His approach shot sailed long on No. 12, leading to his first bogey of the day. He hooked his tee shot on No. 13, punched out and got up-and-down from 167 yards for par. Another wayward drive at 15, another up-and-down for par. When Woods finished off a bogey putt at 18 (another misfire off the tee) it all added up to 2-under 69. Hardly out of it — just two shots out of second place! — but more than a little disappointing.

After the round, Woods worked a little to downplay the week’s meaning. He cited jetlag, and a poor range session, and a lack of practice. But he also said he’s ready to get back at it first thing Friday.

“I’ve been getting up pretty early, so it will be a quick turnaround, get back at it. Hopefully we’ll have a little bit smoother greens out there on the golf course. Hopefully I can hit it as good as I did on that front nine to give myself a number of looks for the entire 18 holes, not just nine holes.”

In the end, the electric iron shots on the front nine stood out, plus the erratic driving on the back nine, and the determination duct tape he used to hold things together. Woods wants this one extra, after all.