This rule could determine Tiger Woods’ chances at the PNC Championship 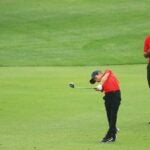 Tiger and Charlie Woods at the 2020 PNC Championship.

During Tiger Woods’ press conference in the Bahamas, he made sure to downplay his recovery progress.

“You know, the USGA suggested ‘Play It Forward,'” Woods said. “I really like that idea now. I don’t like the tees on the back. I like Play It Forward. Come on, let’s move it up, let’s move it up. To see some of my shots fall out of the sky a lot shorter than they used to is a little eye-opening, but at least I’m able to do it again.”

He reiterated the point later in the presser; he simply hasn’t gained back enough speed to compete — even if he had been dialing in his short game.

“I can play a par-3 course, I can hit a few shots, I can chip and putt,” he said. The implication was clear. “I’ll chip and putt any of these guys, but the golf courses are longer than just a chip-and-putt course. We’re not going to be playing the par-3 course at Augusta to win the Masters, so I got to get a little bit bigger game than that.”

Just how much bigger does his game need to get? Woods went through the bag in several range sessions at Albany for the Hero World Challenge; onlookers estimated he was operating at 80 percent of his previous “game speed,” though it’s hard to know.

So when Woods announced his commitment to next week’s PNC Championship, golf fans celebrated — and then quickly started to wonder how well he’d compete.

The format for the PNC is a two-player scramble, with different golfers of different ages and abilities teeing off from different yardages. It’s intentionally forgiving, allowing pros to play at less-than-peak health. Having a partner also takes the pressure off Woods’ driver (though it may put more on that of his son and partner, Charlie, whose booming tee shots put the team in frequent wedge range last year.)

First came one crucial ruling: Woods would be able to use a golf cart. “Ruling” is overdramatic, actually, as the PNC doesn’t restrict cart usage.

But then there was another question raised on Golf Channel, when Golf Today hosts Shane Bacon and Damon Hack queried PNC Tournament Director Teo Sodeman on Woods’ appearance. First they asked him whether Woods’ announcement had any implications for infrastructure or planning. Sodeman, ever the optimist, said they’d been planning for Woods all along.

His answer to the next question was far more clever — and more intriguing: Is it possible Woods would play from a different set of tees?

“Every year we consult with the PGA Tour rules officials and we try to make it as fair and competitive as possible and so we’ll work through that situation in the coming days.”

Hmph. Well played, Mr. Sodeman. That sounds like they’re considering alternatives — but it could mean just about anything. It could mean Charlie may have to play from longer tees than last year. But could it also mean that Woods’ USGA “Tee it Forward” commentary was foreshadowing? Could he be playing from a forward tee to compensate for recovering swing speed? That would put him in a group with legends like Gary Player, Lee Trevino and Mark O’Meara. Either way, the decision will affect Team Woods’ ability to contend.

Still, it’s a little tough to imagine. Would the uber-competitive Woods even agree to accept the benefit of a few extra yards? It didn’t sound like he was expecting any advantage during a weekend NBC appearance.

“It’s short for Charlie,” Woods said of the Ritz-Carlton course. “It’s not short for where I’m playing. I got to play back there with Justin [Thomas], and I’m hitting half as far as he does.”

Thomas seemed less concerned about Woods’ distance. In a statement to Golf Channel’s Todd Lewis, he expressed excitement about Woods’ appearance and optimism about his chances.

“I’m pumped man. Freakin’ awesome to see the progress he’s made and I think him out last week at Hero seeing all of us gave him a little pep in his step. After seeing where Charlie played from last year Tiger might only need his wedge and putter anyway.”

Thomas is defending his title alongside his father Mike. They’ll be among the favorites in the field. (Who on Earth is betting the PNC Championship, you might ask? To which I will respond with a vague gesture in the direction of the internet.) Team Woods is going off somewhere between 6-1 and 10-1, depending on your source. Tiger did say he can chip and putt with anyone, after all.

Golf fans are excited just to see him try.