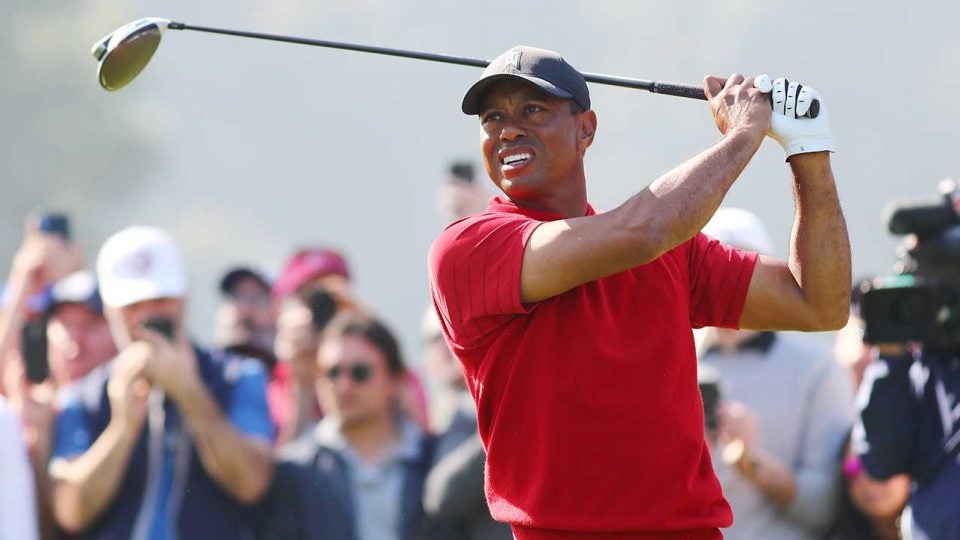 Tiger Woods watches a tee shot during the final round of the Genesis Invitational on Sunday in Los Angeles.
Getty Images

Tiger Woods’ long and exhausting week has come to a close, at least when it comes to hitting golf shots.

Woods, the tournament host at the Genesis Invitational, closed the event with a six-over 77 on Sunday at Riviera Country Club in Pacific Palisades, Calif., where he finished dead last among the 68 players who made the cut. (And well behind winner Adam Scott.)

“Well, I did not do much well today,” Woods said, before finding a little humor in his play. “Good news, I hit every ball forward, not backwards, a couple sideways.”

For Woods, it was a long week that started with tons of promise but played out with a thud and an 11-over total. He opened with a four-under 31 on the front nine on Thursday and signed for a two-under 69, but he followed that with rounds of 73, 76 and now 77. After his round on Saturday — which included a 41 on his first nine (Nos. 10-18) — Woods said he was a little “rundown.” He couldn’t shake a sluggish start on Sunday, either. He started on No. 10 again and made four bogeys and just one birdie and turned in three-over 39.

The lone birdie came on the par-5 17th, where his third shot failed to get out of the greenside bunker but he holed the next.

These two shots from @TigerWoods?

Golf in a nutshell. He can't help but smile.#QuickHits pic.twitter.com/mDpFIzYhmB

Woods eagled the par-5 1st to start his final nine when he stuck an iron from 204 yards to six feet away and made the putt. He would, however, find trouble on the two par-3s on the front. He missed the green on 4 and couldn’t get up and down and made bogey, and on 6 he made double when his tee shot found the sand. He blasted out over the green, and his pitch back on ran over the front to the fairway. The double put him at nine over for the week, which was in last place (behind Ryan Palmer at eight over). Woods closed his round with three more missed greens, which led to bogeys on 7 and 8 and a par on 9.

“[My swing] was just off, it happens,” Woods said. “I’m off and I got a chance to have the week off and do a little prep, a little practicing, some training, be at home and all positive things.”

According to ESPN’s Bob Harig, the only other time Woods finished last among those who made the cut was at the 2015 Memorial. That week was marred by Woods’ third-round 85.

Woods’ Sunday night in LA will consist of tying up a few more loose ends that come with being tournament host, and then he’ll be off for at least one week. He didn’t commit to next week’s WGC-Mexico Championship — “I just felt I wasn’t going to be ready for next week,” he said Saturday — and his next start will likely be either The Honda Classic (Feb. 27-March 1) or the Arnold Palmer Invitational (March 5-8). It’s possible he could skip both and make his next start at the Players Championship on March 12, but it’s likely he’ll tee it up at least once prior to TPC Sawgrass.