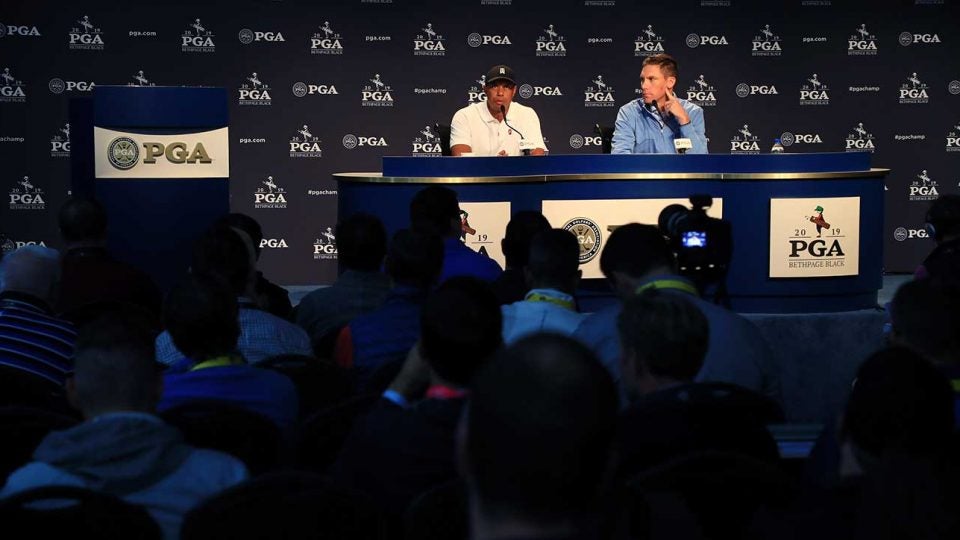 Tiger Woods speaks to the media on Tuesday at Bethpage Black on Long Island ahead of the PGA Championship.
Getty Images

Tiger Woods on Tuesday made his first public comments about the death of former Woods Jupiter employee Nicholas Immesberger, whose family is suing Woods, girlfriend Erica Herman, and The Woods Jupiter in a wrongful death suit.

The complaint was filed in Palm Beach County on Monday.

“Well, we’re all very sad that Nick passed away,” Woods said in a press conference at Bethpage Black on Long Island, site of this week’s PGA Championship. “It was a terrible night, a terrible ending. We feel bad for him and his entire family. It’s very sad.”

Woods was asked just one question about the suit.

According to the complaint, Immesberger, who was 24, crashed his vehicle while driving home from Woods’ restaurant on Dec. 10, 2018. The suit said his blood-alcohol level was .256, more than three times the legal limit.

The lawsuit claims Immesberger was over-served for hours at The Woods Jupiter, located in Jupiter, Fla., before he got into his vehicle.

Since Woods is the owner of The Woods Jupiter he could still potentially be held liable even if he wasn’t physically at the restaurant.

Woods’ representatives have not responded to GOLF.com’s request for comment.

While Woods was giving his pre-tournament press conference on Long Island on Tuesday, Immesberger’s parents, Katherine Belowsky and Scott Duchene, and their lawyer, were giving their own press conference streamed live on CNN. Their suit is seeking damages in excess of $15,000.

“I’m hoping that the restaurants and the bars take notice and realize when someone is impaired and can’t drive so it doesn’t happen to someone else,” Belowsky said. “Because I know this isn’t the only bar that over-serves. It’s a tragedy.”

Belowsky added that co-workers could have called and said her son needed a ride.

“He referred to The Woods as his family and as his friends, and when he needed them they kind of just looked the other way,” she said.

Belowsky and Duchene’s lawyer said hearings should be coming soon.