Plans for next Tiger-Phil match include two other huge superstars 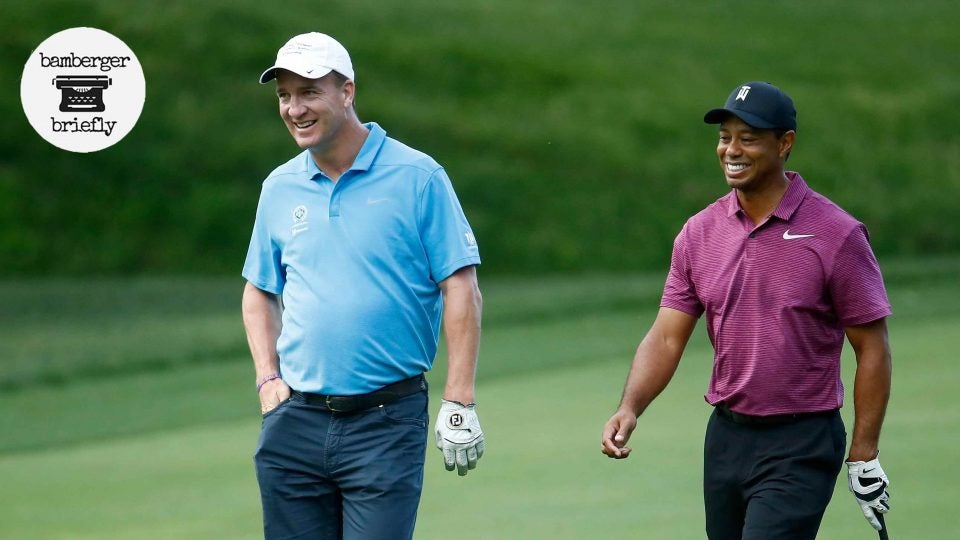 Plans for a Tiger-Phil match sequel include Peyton Manning.
getty

Ed. note: Every weekday between now and when the PGA Tour resumes play, Michael Bamberger will offer a report in this space by 8 a.m. — usually, but not always, playing off the news. We like to give our guy room to roam, but not here: In Bamberger Briefly he’ll be contained to 500 words or less. He welcomes your suggestions and comments at Michael_Bamberger@golf.com.

Match II is a real thing. That is, various parties are coming together — Phil Mickelson, Tiger Woods, their people, Turner — to try to make it happen, according to a source familiar with the plans. Should it materialize, when would this 18-hole match be played? Two weeks before any major league gets back to business.

Let’s say the NBA resumes its season on June 1, which is a wild guess. Then Match II would be played in mid-May.

It will have none of the baggage of Tiger v. Phil, in Las Vegas, Thanksgiving weekend, 2018. That was a gaudy winner-takes-all event with $9 million on the line. This event would not be a cash-grab for either pro. It would be a fundraiser for people who have suffered through the Covid-19 pandemic.

The 2018 match was a pay-per-view show beset by technical problems. The 2020 match would be shown on Turner as regular programming. Advertisers would buy spots as they normally do. That money would become the charitable arm of this venture, coupled with Phil and Tiger’s efforts to turn the event into a telethon. “We are the World” meets the old Jerry Lewis telethons.

The 2018 match was mano-a-mano. Match II would be a team affair, with Tom Brady playing with one of the golfers and Peyton Manning playing with the other. By personality type, you would think that Manning and Mickelson would be a natural pairing, as they are both talkative extroverts. But Woods has played with Manning before, including the pro-am round at last year’s Memorial tournament. There is a comfort level between them.

The match would be played at a Florida course. There would be no spectators. The players would keep six feet from one another, in accordance with CDC guidelines.

A match along these lines has been under discussion for a while, but Woods and his camp had not shown particular interest in it. What has changed is Woods’ recognition of how serious this pandemic is, the toll it has taken on innumerable people around the world and the void felt by millions without sports to watch and follow and discuss.

On Sept. 21, 2001, 10 days after the Sept. 11 attacks, baseball was played again. A two-run home run that night by Mike Piazza of the New York Mets, in a game played at Shea Stadium in New York City, is often cited as a moment the city, the pastime and the nation got its mojo back.

But it would be a welcome event. It would give sports-starved fans something to look forward to, give us an open window to help people in need. It would show us we’re on a path to getting our old lives back. It would be nothing like Match I. Really, it wouldn’t be a sequel at all, but an event that captures a moment in time we hope never to see again.