Tiger Woods was back in the spotlight at the WGC-Dell Technologies Match Play while drama found Sergio Garcia and Matt Kuchar once again. There was no shortage of trending stories from Austin Country Club and beyond this week. Let’s look back at what had the golf world buzzing on social media.

Shot of the Week

Just when you think we’ve seen it all from Tiger, he pulls off a shot I never would’ve thought of.

On a knee. Lefty. Under a bush. Knocks it within feet of the pin.

It was one of those shots where Tiger reinforced the fact that he is not indeed like the rest of us. At the same time, whenever Tiger pulls off something like this, it inspires an army of weekend warriors to try the same.

I fully expect to see a trend of average golfers hitting extraordinarily bad shots in an attempt to be like Tiger. Though that’s nothing new… 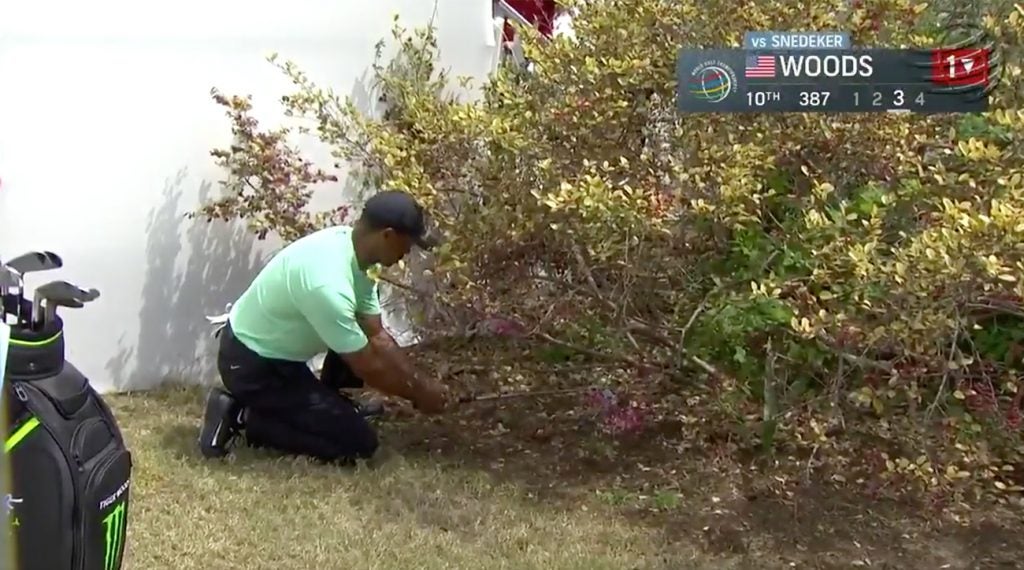 Tiger Woods pulled off one of the most memorable shots of his career at the WGC-Dell Match Play.

Observation of the Week

I’ve watched videos of Rory McIlroy and Tiger drive the ball until my eyes started to bleed. I still swing nothing like either of them nor do I hit with even a fraction of their distance. Somehow, I’ve never seen a close up on how differently they strike the ball.

I’m fascinated and more confused than ever by this closer look. Should I be trying to copy Tiger or Rory’s approach? That’s like picking a favorite between my non-existent children.

This was a really cool side-by-side of Rory and Tiger at impact — look how high off the ground Rory's driver is! pic.twitter.com/LIf45zPODN

Drama of the Week

The most contentious moment during Match Play week came between Sergio and Kuch. After Sergio rushed a tap-in putt – and missed – before Kuchar could officially concede, Garcia lost his cool and played his way to defeat over the next few holes.

Kuchar felt uneasy about the situation and Sergio suggested he concede a hole to even things out. Well, Kuch wasn’t having any of that. There’s an argument to be made on each side, but I’m siding with Kuch here. Rules are rules, Sergio.

Drama seems to ALWAYS find these two of late, and that’s certainly not a good trend.

Matt Kuchar did not have a chance to concede Sergio Garcia's second putt.

Kuchar told the official he wanted to give Garcia the putt, but that cannot be done retroactively. pic.twitter.com/AJFF8N5J7h

Backyard of the Week

Are you looking to make some friends in the neighborhood? Installing an Augusta National replica in your backyard will have patrons flocking to your house. This is seriously one of the coolest backyards I’ve ever seen.

Do you charge Augusta prices on food and drinks to visitors? Are those seats placed and saved for returning patrons? Can I sell a badge for crazy money on the secondary market? I need to know if this backyard has traditions unlike any other.

Say goodbye to your lawnmower; this creation from PuttTek is maintenance free. Now I’m wondering what they could do with my New York City apartment…

If you can’t get to Augusta, bring Augusta to you. 🙌 (via @putttek)

NSFW video of the week

When you finish playing a terrible round, you begin to question just about everything. Clubs always receive the blame first. And why wouldn’t they? It can’t possibly be your swing, right?!

I’ve never broken a club in my life. I’ve been tempted to a few thousand times, and that might be a conservative estimate. After watching this man vent and snap clubs like it was his job, I feel the need to give it a go once in my life to see what therapeutic effect it has…and the regret that comes with it the following day when someone asks me to play.

#whyilovethisgame ⛳️ One of the most hilarious meltdowns ever 🤣 Tag a friend who needs to see that👇 📹- @a2dradio . #golfisfun #golfer #fail

Motivation of the Week

We’re all motived by something on the golf course. Money, beating your low score, making a birdie and defeating a playing partner are all great motivators. Do you know what tops them all? Candy.

Instructor Josh Snider used Skittles as motivation for a young student. When you dangle Skittles in front of a kid (or me), they’re bound to find the bottom of the cup from just about anywhere.

Remember to use “Skittles time!” after you drain your next big putt.