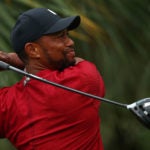 Tiger Woods made $2.3 million over the past year in golf.

He made $60 million in endorsements. Or about 96 percent of his overall $62.3 million in earnings.

Essentially, his main job was a side job.

It pays to be Tiger Woods.

From June 1, 2019, to June 1, 2020, Woods was the eighth highest-paid athlete in the world, according to the annual Forbes Magazine list, released Friday. Tennis player Roger Federer topped the list, a spot Woods held previously in his career a record 12 times, and three other golfers – Rory McIlroy, Phil Mickelson and Jordan Spieth – were in the Forbes top 100.

Woods’ endorsement total was tied with basketball player LeBron James for the second-highest figure on the list, behind Federer’s $100 million. Woods’ salary/winnings total was 96th on the list, which was still higher than Spieth’s ($1.6 million; 98th) and Mickelson’s ($800,000; 100th).

Various off-the-course troubles dropped that figure to $37 million in 2017, according to Forbes.