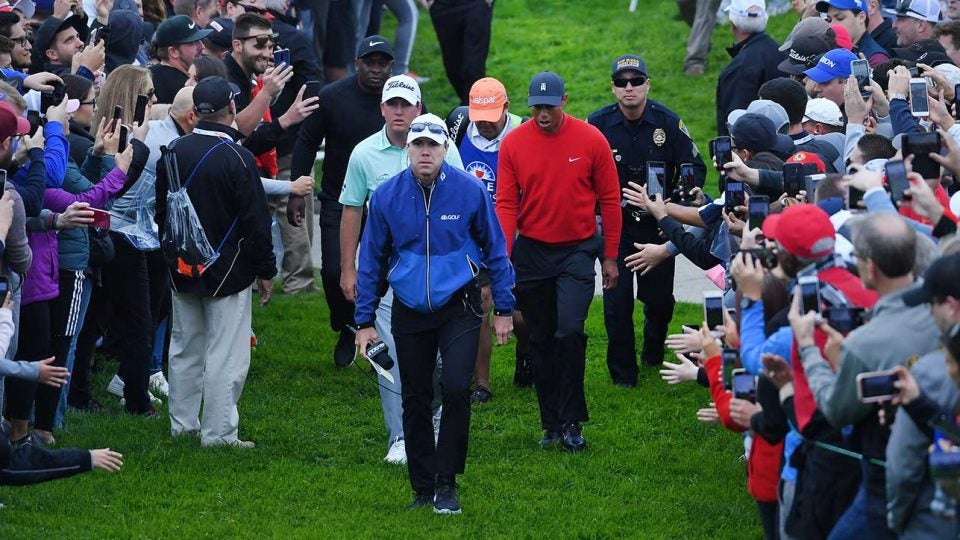 Sunday was a somber day in the sports world. Athletes and fans across the globe grieved the loss of NBA superstar Kobe Bryant and his 13-year-old daughter, Gianna, who both died in a helicopter crash on Sunday in Calabasas, Calif.

According to reports, there were nine people on the helicopter when it crashed. There were no survivors.

The NBA reportedly debated whether to proceed with games on Sunday, but ultimately the league played on with tributes to Bryant. On CBS Sports, which was preparing for the final round of the Farmers Insurance Open at Torrey Pines, Jim Nantz opened the broadcast by addressing the news.

“We are live at the Farmers Insurance Open just outside of San Diego, Calif., at Torrey Pines, and like you at home we are trying to get our minds around this news that has been now wildly reported, the LA Times just confirming it that these reports are true,” Nantz said. “The sports world has lost one of the great superstars of our time. The reports, again, of a helicopter crash in the last couple of hours 140 miles north of where we are right now in Calabasas, Calif., with Kobe Bryant on board.”

Tiger Woods, a well-known Los Angeles Lakers fan, made his 2020 debut at Torrey Pines, and when Woods was putting on the 9th green on Sunday, the CBS broadcast said that Woods’ caddie, Joe LaCava, had informed Woods of the accident. But apparently that wasn’t correct, as the broadcast showed LaCava telling a shocked Woods as they made their way from the 18th green to the scorer’s tent. “Excuse me?” Woods shot back.

Tiger and Kobe. 1996. Hug your loved ones. pic.twitter.com/ZYw0QBvJMI

It was at this same event in 2013, when play was sluggish on a Monday finish, that LaCava was quoted in the LA Times discussing what he and Woods talked about during the lengthy round. “We talked a lot about Kobe [Bryant],” LaCava said. “He loves Kobe and he couldn’t believe he had 14 assists the other night. He was stoked about that.”

Woods talked to CBS Sports’ Amanda Balionis after his round on Sunday and confirmed he didn’t know about Bryant until LaCava told him just minutes earlier.

“I didn’t really understand why people were saying, ‘Do it for Mamba (Bryant’s nickname),’ but now I understand,” Woods said. “It’s a shocker to everyone. I’m unbelievably sad. For me, reality is just setting in because I was told probably five minutes ago.”

Balionis also asked what Woods will remember most about Bryant.

“The fire — he burns so competitively hot — and the desire to win,” Woods said. “He brought it each and every night on both ends of the floor. Not too many guys can say that throughout NBA history. He locked up on D, and obviously he was dominant on the offensive side. Anytime he was in the game he’d take on their best player and shut them down the whole 48 minutes. That was one of the more impressive things from his entire career. And then when he ruptured his achilles [in 2016] and went to the foul line and made his shots. That’s tough.”

Woods closed with a two-under 70 and finished nine under overall, which tied him for 9th.