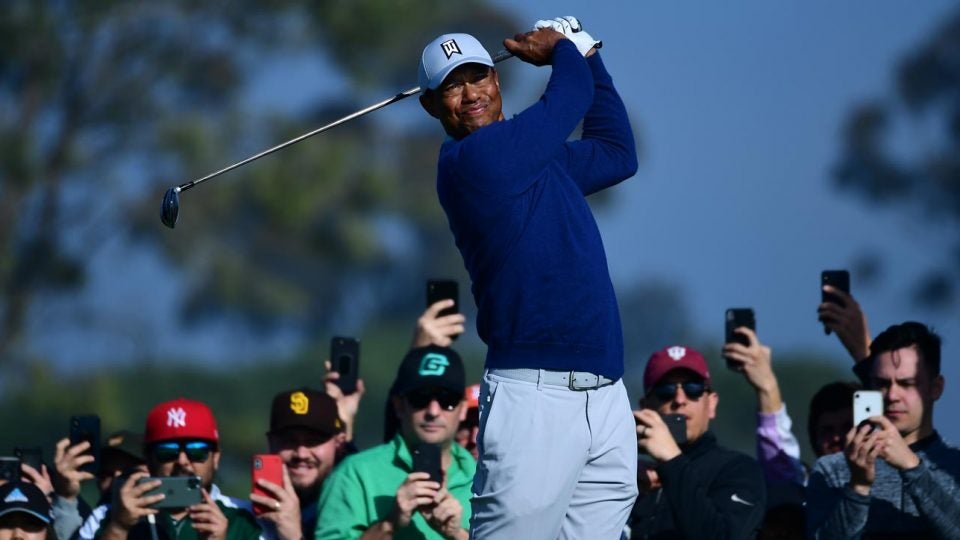 Tiger Woods pictured during the third round of the 2020 Farmers Insurance Open at Torrey Pines.
Getty Images

Tiger Woods has won the Farmers Insurance Open seven times, and he has his eyes on an eighth victory halfway through the third round at Torrey Pines.

Woods began his second round with a shocking four-putt double bogey on the 1st, a hole that famously tortured him during the 2008 U.S. Open (he doubled it three times and went on to win anyway). But Tiger wasn’t about to let that happen again on Saturday.

After waiting through a two-hour fog delay, he turned that crooked 6 into a 3, opening the third round with a birdie to move to five under for the tournament, five shots back of leader Ryan Palmer who had yet to tee off. He nearly added another birdie at the 2nd, when he stuck his approach to 13 feet. But his putt just missed, leading to a tap-in par.

One hole.
One birdie.@TigerWoods gets it rolling early in Round 3.

Things almost fell apart at the 4th hole. The long par-4 plays as the hardest on the course, and it tested Tiger to the limit. His approach went wide right into deep rough above the green. He chunked the chip and watched it roll off the putting surface into more rough. But he holed his chip from 17 feet to save par and keep the momentum going.

A touch of class. 👏@TigerWoods saves par at No. 4 with this shot.#QuickHits pic.twitter.com/TYqokwHnUf

After another par, Woods flared his second at the par-5 6th into thick stuff to the left of the green. He did a fine job getting that chip shot to stop 13 feet away from the hole, and then rolled in the remaining putt for his third birdie of the day.

His third red number in the first six holes moved him all the way up into a tie for sixth, putting him within three shots of Palmer’s lead.

Woods followed that up with two-straight pars on 7 and 8, and then split the fairway with a 304-yard bomb on the par-5 9th. He chose to play it safe and not try and reach in two from 294 yards, and instead hit a layup to set up a wedge into the green.

He landed the ensuing shot on the back of the green, and then spun it back nearly into the hole. Though it was on a perfect line, it didn’t have enough gas, and stopped four feet away. Tiger confidently holed that one to make the turn at four under on the round, and eight under for the tournament.

Palmer, who teed off just before Woods made the turn, earned his spot on the leaderboard with an incredible 10-under second round on the North Course. He didn’t fare as well playing the South Course on Thursday, finishing with an even-par 72. With the final two rounds moving to the South, birdies won’t come easy, so it’s anyone’s game.