Why Tiger Woods tackled this actor on a Buick commercial shoot 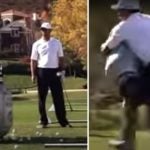 Tiger Woods may have tackled this guy a little harder than he expected.

Golf fans know the chapters of Tiger Woods’ career so well that if you bring up a video, there are always context clues that would tell you when it was filmed.

How baggy are his shirts? How fluorescent? What driver is he playing? What golf ball? There are plenty of telltale signs that orient Tiger truthers.

One thing is for sure, though: You’d never see Tiger Woods attempt a flying tackle after the year 2007. That’s the subject of today’s Tiger Woods YouTube Project, where we’ve taken a close look at a YouTube video from each year of Woods’ life looking for insight or just for entertainment. This week, we’ve got a bit of both. But first, the video:

Chapter 23: How one Tiger Woods commercial changed the way we saw the golf swing

It’s a simple, funny, 45-second bit. But there’s still plenty to unpack from the clip. Here are five takeaways:

It’s funny, the things we get used to. Somehow the electric lime-and-black Monster Energy bag that Joe LaCava currently totes on Woods’ behalf has become a natural part of his iconography. That’s just how Woods looks on the golf course now. But at first, it looked ridiculous compared to Woods’ more understated Buick bags over the years. They looked somewhat classy at the time and now look rather shabby by comparison. Sign of the times.

As for his driver? That would be the Nike SasQuatch, our own gear guru Jonathan Wall confirms. “Sounded like a tin can,” he recalls fondly. This is the era when Nike was slinging some suspect drivers, including the unforgettable Sumo, which K.J. Choi had in play at the time. During this era, it felt like Woods could have grabbed a set from Goodwill and still flattened the field.

2. Tiger told the director to change the commercial.

The original concept for the ad was that as the bag-stealer tried to make his escape, Woods would throw a golf ball at him. But Woods told the Pasadena Star-News he didn’t think that went far enough.

“I just think (in the first one) that wasn’t me. If someone took my bag, I would do something a little bit more than just throw a golf ball at him, OK?”

The director agreed. On the one hand, it makes sense that he’d agree. It was bound to make for a more entertaining commercial, plus directors had a successful history of listening to Woods’ in-shoot improv suggestions — and who’s going to say no to Tiger Woods? On the other hand, if peak Tiger Woods was under your supervision and he told you he wanted to do something that could imperil his physical well-being, you’d likely stay the hell away. All good: Woods came away from this particular exercise unharmed (we think).

3. There was a little blood.

Woods later recounted the story behind the ad to the Pasadena Star-News.

“Well, as I got closer to him, I got into it a little bit, probably too much, and I got a little excited and yeah, he had a little scratch on his forehead.”

That’s pretty evident from the guy’s reaction in the video. At the 30-second mark, the thief asks, “What happened?!” in the sort of way that you’d only expect a surprised person to act. Maybe he didn’t fully know what had just hit him. Still, he got a hug from Tiger and a hell of a story.

Not everyone was impressed with the ad. Sports Business Daily noted at the time that ESPN’s Tony Kornheiser called Woods “an idiot” for doing his own stunt for the ad. “If you worked for IMG, would you have been happy seeing him tackle this guy with golf clubs flying around?” Kornheiser asked on Pardon the Interruption. John Anderson and Steve Levy were more impressed on SportsCenter.

“He used to be spindly; now he’s big like that,” Anderson said in the grainy clip below. “Golfers on Tour actually get it much worse.”

4. This was Tiger Woods at the peak of his powers.

I don’t mean this in an inflammatory, embrace-debate way — there’s a worthy argument to be made about the best stretches of Woods’ career. But just take a look at what Woods was up to around the time this commercial first aired.

Following the death of his father in 2006, Woods missed the cut at the U.S. Open. He finished T2 in his next start out, at the Western Open. Then he won the Open Championship, the Buick Open, the PGA Championship, the Deutsche Bank and the WGC-American Express to finish 2006 on the PGA Tour (he mixed in a couple starts internationally and finished T9, 2, 2). The week this spot aired was the week of the 2007 Buick Invitational, Woods’ first start of the year. He would chase down Andrew Buckle (!) with a Sunday 66 to claim his sixth Tour win in a row.

At this point, he was impossibly good at winning.

5. Tiger was jacked at the time.

In this space, we like to get right up to the edge of psychoanalysis without diving all the way in, so let’s toe that line once again. It makes sense, in many ways, that this would be the era in which Woods was playing driving range linebacker. He’d put on a ton of muscle (30 lbs since turning pro), and by all accounts this was the period he was dabbling in SEAL training and devoting himself to aggressive weightlifting.

Several months later, Woods was on the cover of Men’s Fitness, and Ken Kleven, his Las Vegas-based personal trainer, explained his workout regimens. He called his weight gains “off the charts.” Woods himself said his focus was on his back, his shoulders and his posture. (He also acknowledged that there was no hope for his legs. “Definitely not my calves, though. They have never grown — at all. It’s just funny.”) He was ensconced in high-rep, high-intensity workouts, fully committed to becoming a level of athlete the golf world had never seen.

Eighteen months later, Woods was hobbling around Torrey Pines en route to a miraculous victory at the 2008 U.S. Open, his last major championship for over a decade. But in this clip, on a sunny Buick shoot in early 2007, that chapter of Woods’ life was still a world away. So it might just look like a tackle — but it marked the beginning of the end of an era, too.

Why is Stewart Cink winning at 47? He has a pre-round ‘system’ to thank