Why Anthony Kim refused to gamble with Michael Jordan 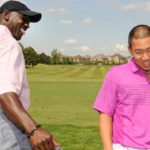 When it comes to the intersection of golf and gambling, there’s no more legendary a figure than Michael Jordan. In just the first two episodes of The Last Dance, the ESPN documentary that premiered Sunday, we learned why Jordan bought Scottie Pippen a set of clubs and how a bad round of golf spurred Jordan’s 63-point playoff performance.

But that was just scratching the surface. So my co-host Sean Zak and I took the opportunity to focus this week’s Drop Zone podcast on MJ’s golf career arc. From his introduction to the game (via Davis Love III) to six-figure on-course gambling losses (six figures according to Jordan — seven, according to others) to his omnipresence at Ryder Cups to his frequent money games against the best players in the world, we took a deep dive.

You can listen by clicking here:

In that trip down the rabbit hole, it was especially fun finding quotes from players who have spent plenty of time with Jordan on the course.

Rickie Fowler described the stakes of a match with Jordan to Jason Sobel of the Action Network: “He’ll play you for whatever you want. Whatever makes you scared.”

At age 16, Justin Thomas joined Jordan’s group for an unforgettable stretch of holes. “He told them, ‘Alright, I’ve got the little man. We’ll take whoever wants us.’” Thomas remembers. “There’s eight people. He wouldn’t tell me the game; he said I didn’t need to hear that.”

Keegan Bradley told ESPN’s Scott Van Pelt and Ryen Russillo that Jordan was a great guy to play against. “I call him my human ATM,” Bradley said. “If I need some cash, I just call up MJ.”

Still, Bradley added, the matches are filled with intrigue — and smack talk. “He really is a good player, but the fun part of playing with him is he’s always in your ear,” he said. “He’ll go places that are tough. After the round you’ll kinda be thinking, ‘Man, that was some tough stuff that he said to me.’ But he’s just such a good guy, it’s amazing when you meet your idols and they exceed what you expect out of them, and MJ is one of them.”

But one of my favorite nuggets we unearthed was from a Q&A that Brian Wacker did with Anthony Kim for pgatour.com in 2009. Any old Kim stories are a delight to revisit, but AK and MJ? That’s gold.

In the interview, which you should read in its entirety here, Wacker asks about Kim’s junior basketball career and how it’s been meeting some of the game’s greats, from Blake Griffin at Oklahoma to figures like Charles Barkley and Jordan, now that he’d become a high-profile golfer. Jordan had been at the Presidents Cup, which Kim described as a win for the team. But the two had met before that, too, and Kim had tried to soak up some lessons from the experience.

“I learned a lot from him in terms of trying to stay patient, even though I beat the hell out of him on the course. It’s hard for me to be patient at 24 sometimes, but I’m learning. Or at least I’m trying to.”

The next excerpt is even better:

PGATOUR.COM: Have you played a lot of golf with Jordan, or any other NBA players?

AK: Have you heard that expression about taking candy from a baby? Yeah, [Jordan and I] played, but I could never take any money from that man. I had a couple of opportunities to play with some of the guys from the Lakers, but I just haven’t been in L.A. that much lately. But whoever wants to get a beating, I’ll be happy to play. I love talking trash all day long.

His answer harkens back to Bradley’s description of Jordan as his “human ATM,” suggesting that Jordan was an easy mark for golf’s elite players. Even at 24 years old, it’s telling that Kim refused to take money from Jordan on the course.

But that’s just the tip of the iceberg! For more, have a listen to the Drop Zone podcast below, or at any of these links:

Find the Drop Zone wherever you listen to podcasts: iTunes | Spotify | Soundcloud | Stitcher