The extraordinary meaning of Tiger Woods’s 82nd win (and, yes, he will win today) 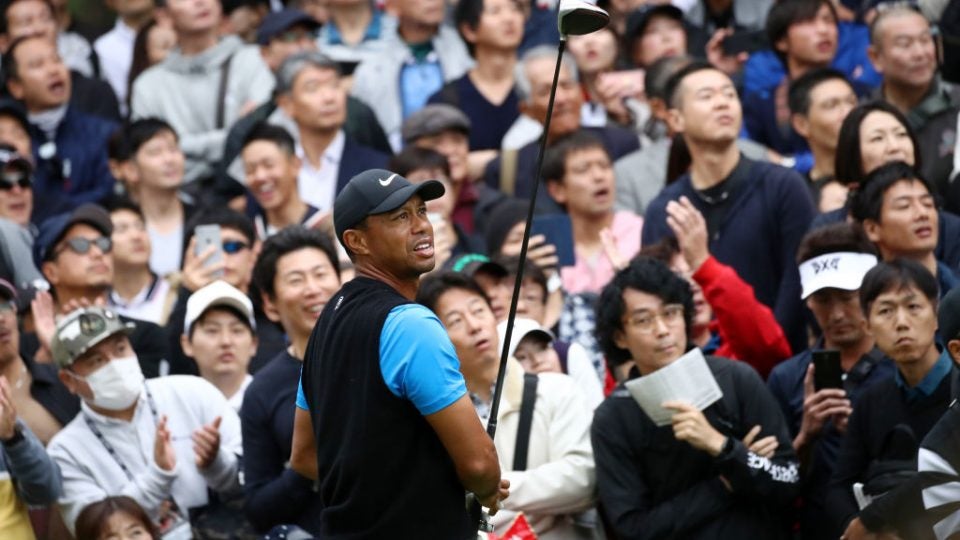 Woods is on the verge of history in Japan.

Tiger is going to do two things today for the betterment of golfkind. He’s going to unclutter the PGA Tour record books, and he’s going to save the 2019 Presidents Cup.

He’s also going to make $1.8 million, as the winner of the first PGA Tour event in Japan, called the Zozo Championship. He’s going to solidify his place as the all-time money leader on the PGA Tour, with almost $120 million in career earnings. Phil (Mickelson) is next, with $91 million.

You can argue that Woods has been vastly underpaid to date — Mike Trout of the Los Angeles Angels will make $37 million just this year — but it’s also clear that Woods has some serious earning years in his future. By the end of 2019, he’ll be more global than he’s ever been, and he’s been a global icon for more than 22 years already. He’s opening Japan right now as it has never been open to him before. Ditto for Australia, when the Presidents Cup is played there in December.

Regarding the record book: The historians at the PGA Tour HQ in Ponte Vedra Beach, Fla., have known for decades that they have an accounting problem with their own all-time career wins record. It certainly looks tidy enough — Sam Snead, 82 — but once you start examining the list, it falls apart.

The most definitive mainstream media analysis of this issue was done by my former colleague, Gary Van Sickle, in 2013. When Van Sickle eliminated the wins credited to Snead for events that might charitably described as funky, he credited Snead with 74 PGA Tour victories. In 2013, Woods already had 78 genuine PGA Tour victories.

Even that comparison is essentially meaningless because the modern, codified PGA Tour, chartered and official, wasn’t even started until 1968. Snead, one of the greatest golfers in history, went around the country, played golf wherever there was a purse, cashed the checks as fast as he could. That was the tour then. The circuit, as it was often called. Pro golf. The pro tour. But not the PGA Tour.

If you wanted to look at Woods’s career as we look at Snead’s, you’d have to count his many wins in legitimate professional events that were not part of the PGA Tour. If you count his wins in actual tournaments in Europe, Asia, Australia and other places, he has well north of 100 professional wins.

In any event, when Woods gets his official 82nd win Sunday (Monday in Japan), he and Snead will share a line in the PGA Tour record book. And when Woods gets to 83, and he will, everybody in Ponte Vedra Beach will breathe a sigh of relief. The Tour will have a clear record-holder, and nobody will ever beat it. 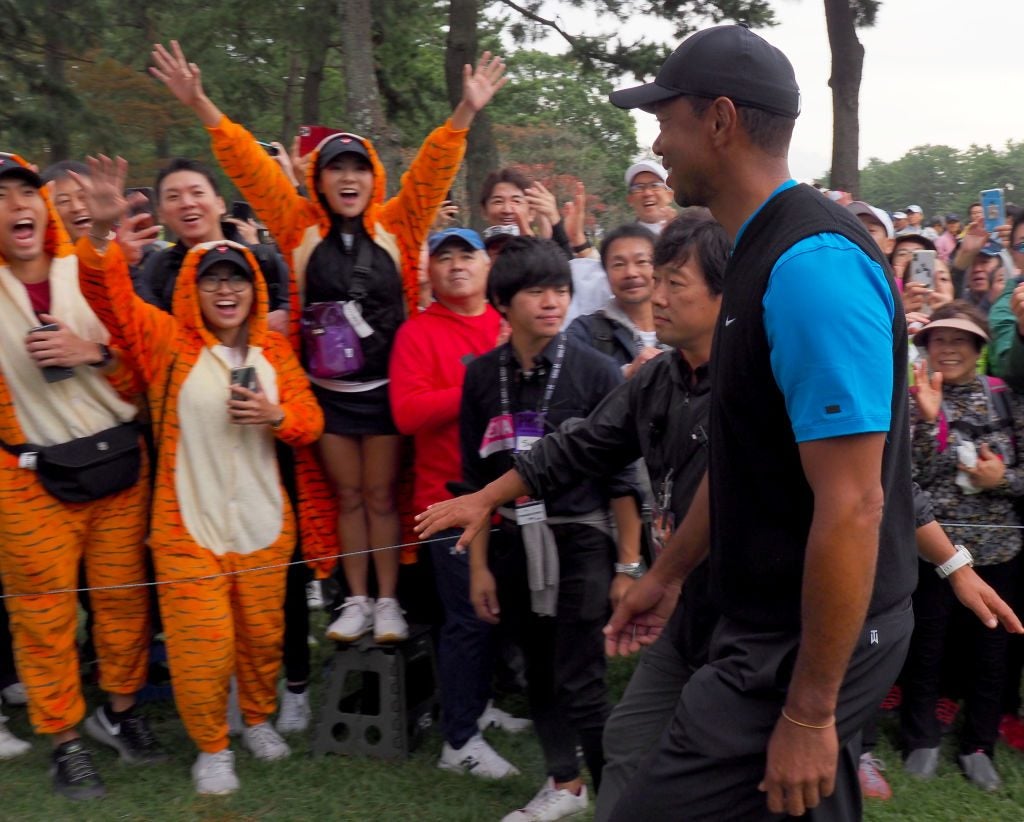 Tiger's fans have been out in full force this week at Narashino Country Club.
getty

As for Woods as the savior of this Presidents Cup, with his win in the Zozo event, his three assistant captains, and the eight players who have already made the team on points, will absolutely insist that Woods pick himself as one of the four remaining captain’s picks he is required to announce on Nov. 7 to complete the 12-man team.

The Presidents Cup, in which the United States plays a team of international golfers from everywhere except the United States and Europe, has never captured the imagination of the sports-watching public. This year, people will watch and care. For one thing, the event is being held at Royal Melbourne, which is one of the most interesting courses in the world. For another, the U.S. actually lost a Presidents Cup at Royal Melbourne in 1998. The U.S. has won the event 12 times — one time, in South Africa, it ended in a tie — and the Internationals have won it only that one time, in Australia 21 years ago, when Woods was a Presidents Cup rookie and Jack Nicklaus was the captain. And then there’s the third thing: Tiger, as a playing captain. Tiger playing. Tiger playing golf is an interesting thing.

With Woods as a playing captain, this year’s event will be viewed as a new start for the Presidents Cup. And if Ernie Els’s International team wins, and it certainly could, the 2021 Presidents Cup at Quail Hollow will become an actual thing. That’s what some people are thinking, anyway.

But what Woods is doing this week in Japan goes way beyond even the Snead record and a colossal, impromptu marketing campaign for the Presidents Cup.Woods is on his way to making 2019 the most interesting year of his golfing life. The candor of his extemporaneous comments at the Golf Writers Association of America dinner on the eve of the Masters, a side of Woods that the public has never seen before. (Woods spoke openly of the pain he was in, the nerve block he required to attend the 2017 champions dinner, flying to England that night to see back specialists.) His win, five days later.

Then there’s the futility of his golf the rest of the year. The poignancy of a family trip to Thailand, his ancestral home on his mother’s side, with his girlfriend, two children and mother. His upcoming win in Japan. TThe start of a new chapter, as a team captain, an industry leader, and an aging icon, while managing to retain the ability to win tournaments, at least now and again. Even Serena Williams and Roger Federer cannot say they own their sport so thoroughly. Then the announcement that Woods is writing a memoir where, you hope, he will talk about his life and times with a candor that has never been easy for him.

What Woods is doing here, at age 43 with a surgically repaired body and a personal life that has been picked over as no personal life should ever be, is beyond astonishing. It’s a testimony to drive, to the application of intelligence and talent and strength, mental and physical, to a broad array of challenges.

The best one-sentence summary of what Woods is doing here came from an unlikely source, Arthur Blank, the owner of the Atlanta Falcons, in an offhanded comment in an interview at East Lake in August; this was at the Tour Championship, a tournament for which Tiger did not even qualify. When Woods won last year at East Lake, his first tour win in five years, Blank, summarizing its meaning a year later, said, “He reclaimed his identity.” The only way to improve that sentence is to modify the tense: Woods is reclaiming his identity. It’s a process, to use a choice Tigerism.

News
If Tiger Woods wins this week, U.S. fans will get to watch it in prime time

You might be uncomfortable, with the casual assuredness offered here, that Woods will close out this Zozo Championship. He has a three-shot lead with seven holes to play. Guys have choked up bigger leads than that, many times. But Tiger Woods has not, and he won’t. His golf is too good right now, and his mind is too strong.

For the first 30 years of Tiger’s life, he was always Earl’s son. Earl’s son, Earl’s kid, Earl’s project, Earl’s prodigy. Tiger was, for all his fame and fortune and success, a child, a kind of puppet. Then Earl died, in 2006, and when he did Tiger went into a long period of arrested adolescence. Then came his Memorial Day arrest in 2017 and a fresh start, in 2018 and 2019. He’s been different. In his press conferences, in his fan interaction, in his relationships with other players. He’s been playing without a swing coach at his side for the first time in his life. When Tiger hugged his children in the wake of that stirring Masters victory, it of course reminded the world of how he hugged his parents when he won the 1997 Masters at an age when most American kids are in college. Over the course of the past two years, Woods has staked a claim for his own adulthood as he has never before.

He has 15 major professional championships: five Masters, four PGAs, three U.S. Opens, three British Opens. Nicklaus has 18: six Masters, five PGAs, four U.S. Opens, three British Opens. Can you really compare Jack’s 18 with Tiger’s 15? No, not really. Tiger had to beat a vastly bigger golf population, from all corners of the world. But Jack played against a long list of men who had talent, intelligence and a personal toughness, a ruggedness, that is largely absent from today’s game. Still, it’s far easier to compare Jack and Tiger than Snead and Woods. You’d have to say there’s a chance — a chance — that Woods could get to 18, maybe even 19.

That doesn’t come from this bureau. It comes from Big Jack himself. He has said it a hundred times: Never, never underestimate this Tiger Woods.

Earl used to say to Tiger, grandly: “Let the legend grow.” Easier said than done, but still a pep talk for the ages. Tiger has the chance to let his legend grow, over these remaining seven holes. When’s the holes are done, he’ll own the day, the month, the year in golf. To let the legend grow, you have to seize the day. Or at least the two hours it takes to play seven more holes.