‘They hate to lose’: Ricky Barnes dishes on his rounds with Bill Belichick and Tom Brady

We caught up with longtime Wilson staffer Ricky Barnes in Scottsdale, just before the Super Bowl, to have him assess Bill Belichick and Tom Brady — on the golf course.

Barnes, whose father Bruce was a punter for the Patriots in 1973-74, captured the U.S. Amateur in 2002 and tied for second at the 2009 U.S. Open, but lately, he’s earned as much fame for his recent AT&T Pebble Beach Pro-Am pairings, which includes multiple events with current Patriots coach Bill Belichick — most recently in 2017 — and one tournament with quarterback Tom Brady, in 2014.

Here’s Barnes’ take on Belichick and Brady on the links.

Belichick’s greatest strength on the course is his determination.

“He’s one of those guys that asks a lot of questions and puts trust in you,” Barnes said. “You kind of see why he’s such a good coach, because if he asks a pro what to do, he just follows that advice. He doesn’t really ask why and he doesn’t have to ask again.” “He’ll show up and even though he hasn’t played golf in about eight or nine months, every year he comes to the AT&T, he’ll play, and he’ll hit balls after he plays. He doesn’t like not being able to compete.”

And he’s solid around the greens.

“He doesn’t hit it very far or high, but he’s actually got a pretty good short game. The best part of his game? He’s very coachable.”

We almost won together.

“My favorite memory of playing in the AT&T at Pebble with Coach was the first year we played (in 2012). We lost by two shots, finishing third. Personally I had a great time with him. He’s kind of an open book when I ask him questions and you get to know his thought process on football, or just sports in general. He’s a huge lacrosse fan.”

Surprise, Tom Brady is competitive in golf, too.

“I played with Tom Brady in the AT&T three or four years ago (2014). He was my partner. He was funny, giving us grief for having to quit in the rain. He was really competitive, and can play, too. He made an eagle at Pebble’s (par-5) 2nd hole. We almost made the cut that year. As far as rating the competitiveness between Brady and Belichick? Oh, man. If it’s a 10 out of 10, I think they’re both at 11. We were playing in the same foursome as Coach (Belichick) that year. There’s a reason why they’ve been together for 18 years and he drafted him and they haven’t left each other. They might get at each other’s throats probably every once in a while, but that’s because they hate to lose.” 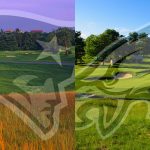 You may also like Philadelphia vs. New England: Who wins the golf battle in Super Bowl LII?