The Sandman: A Q&A With Mike Keiser, the Dreamer Behind Bandon Dunes 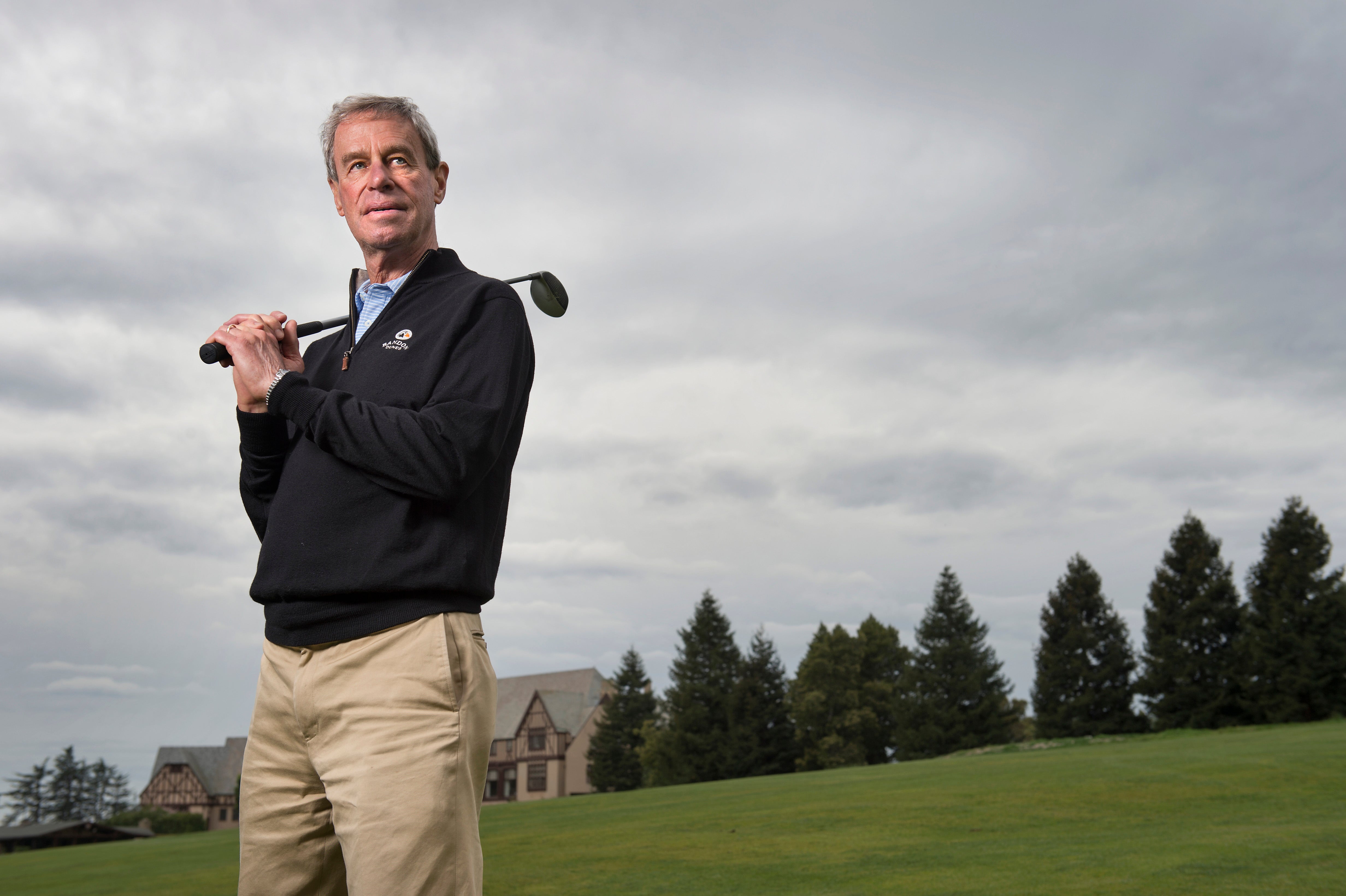 When Mike Keiser invested part of the fortune he’d made as cofounder of a Chicago greeting-cards company to build a links course on a remote stretch of the Oregon coast, he had no idea how many golfers would make the pilgrimage to play it. But journey they did. The success of that original 18, Bandon Dunes, which opened in 1999, spawned Pacific Dunes, Bandon Trails and Old Macdonald, plus Bandon Preserve, a par-3 course, all of which make up Bandon Dunes Golf Resort.

Keiser, 70, isn’t finished. He hopes to build a 27-hole muni a few miles south of the resort, and he’s developing two other links-golf destinations: Cabot Links in Nova Scotia, whose second course will open for preview play in July; and Sand Valley, set in the hulking sand hills of central Wisconsin, where construction of the first of two courses began in summer 2014. The common thread running through all of Keiser’s projects is sand. The sandier the soil, the faster it dries and therefore the firmer—more linksy—its turf. These attributes certainly describe Chambers Bay, a kindred spirit of Bandon Dunes. Keiser’s influence extends even further. The minimalist movement he helped spark is redefining golf in America by embracing walking-only policies, modest amenities, and courses designed with help from nature, not bulldozers. We caught up with Keiser, who discussed his philosophies, inspirations, and why he thinks links courses are more fun than parkland tracks.

You didn’t develop Chambers Bay, but do you consider this year’s U.S. Open an endorsement of Bandon Dunes?

I think it is. It’s inexact, because Chambers Bay is built on an old sand-mine site and there’s a lot of elevation change. That elevation change is not characteristic of a links site, but certainly the style of the course and the fescue grass make it very links-like.

A generation ago, it would have been inconceivable to play the U.S. Open on a links course like Chambers Bay. Not everyone loves links golf. Is a philosophical shift happening?

It’s evolving that way. Links golf isn’t for everyone. Americans are used to courses like Augusta—really green grass, 13 on the Stimpmeter, a lot of flowers. But most people like the severe, or austere, look of links, and I think they’re much more fun to play on than target golf courses. They’re wider. They aren’t designed to kill your score but to be fun.

What led you to develop Bandon Dunes?

One of the major figures of golf in Chicago in the late ′70s and ′80s was Gary Groh, winner of the Hawaiian Open and a Tour player for years before becoming the revered head pro at Bob O’Link in Highland Park, where he still is. I knew Gary. He would bring up his trips to Ireland. His favorite course in the world was Royal Portrush, so I went there. I played Portrush, as well as Royal County Down, numerous times. It was a fabulous experience, on a links site with beautiful sand dunes, with great holes.

I also went to Scotland, where in my mind the bookend to Royal Portrush was Royal Dornoch. When I played Dornoch in the ′80s, I was amazed at how many Americans made it over there. By then, I had already built the Dunes Club [on Lake Michigan], which is an homage to Pine Valley. It’s a links-like course. And that made me say, “I want to do this again—what are my models?” And the models I had: Royal Portrush, Dornoch.

Was it important to you to build great courses that the people could play?

Part of the business case for a quality public course is that almost all the best American courses are private. When as golfers we look at the [course] rankings, we say, “Let’s play Augusta, Pine Valley, Merion.” You quickly find out how hard it is to get onto those courses.

So you’re saying we borrowed the game from the Scots and the Irish and made it exclusive?

Did you set out to change some of the prevailing attitudes in American golf?

Building Bandon Dunes was somewhere between a speculative endeavor and total folly. The inspiration was Dornoch or Portrush, and I later developed another model when I finally played National Golf Links, which is my favorite course in America—so playable, so fun, so beautiful, so links-like. I thought if National were public, it would be a great success.

For all its natural beauty, Bandon Dunes has an understated feel. The lodge is relatively modest and sits far back from the sea. No one rushes to your car to lift your clubs out of the trunk. Is this all by design?

Golf in America evolved into a first-class sport. You had to do luxury. Donald Trump is still doing that, and it works for him. But if you go to Scotland and Ireland, golf is an everyman’s game, like bowling. I wanted to get as close to the Scottish, Irish experience as I could. It’s part of the fun. Picture the biggest clubhouse you’ve ever seen. Does that have anything to do with having the four-ball game you can play in two and a half hours, then get home and see the kids? The trappings get in the way.

Do you continue to be surprised by Bandon’s success?

All these avid golfers who’d travel to Ireland and Scotland now travel to Bandon. And most of our rounds are played by people who live on the West Coast, where it’s a much harder trip to go to Scotland and Ireland than to Bandon.

How important was it to hire different architects for every course at Bandon?

It amazes me the number of multi-course resorts that were designed by just one architect. If you have architects compete, you get a much better second course or third course than if you have the same guy do all of them. These guys have different styles, but most of all, it’s their competitive spirit. When I hired Tom Doak to do Pacific Dunes, he was hell-bent on making it better than David Kidd’s Bandon Dunes, and they’ve been competing with each other ever since.

Destination links courses are hard to get to, and the costs add up. Is that a limitation?

Unfortunately, remote equals expensive and inconvenient to travel to. But that’s also part of the appeal. I hear that a lot: “It took me a long time, but boy, was it worth it.” You’re investing your time and treasure and the payoff is the fun of a links course and the beauty of sand dunes and the ocean. Ocean is a huge factor. If we built Bandon in South Dakota, we would only have one course.

You recently acquired an oceanfront parcel a few miles south of Bandon Dunes where you hope to build a municipal course, called Bandon Links and designed by Gil Hanse. What’s the state of that project?

We hope to open in 2020. It’s more low-lying than Bandon Dunes—you hear the ocean’s roar, you see the mist coming from the waves. The biggest risk is that it’s five feet above sea level and one tsunami would do particular damage. But it’s such a good site, I can’t help myself. It’s got the same hummocks, little and big, and twisted sand dunes that Tom Doak found at Pacific Dunes.

Why a municipal course?

Bandon Dunes has always been supported by locals, because it’s a big tourist draw and we employ a lot of people. But it’s not priced for the local golfer. It’s the rare local golfer who plays at Bandon Dunes, because even at the winter rate, it’s $75—that’s a lot in an area where people are used to paying $12 to $29. At Bandon Links, local residents will pay $20, or, if they agree to be a mentor to the caddie program, $10. [Tourists will pay Bandon Dunes prices.]

There’s a lot of handwringing about golf’s economic future in America. Are you concerned?

I am. It’s too expensive. It takes too much time. Those two key things can both be beaten. There are a lot of affordable courses. And if you want to play fast, play match play and play in twosomes. And do what they do in Scotland—the first half hour [of tee times] is twosomes so people with no time can play easily in two hours. If I could snap my fingers, I would create caddie programs in facilities all over the country and do what clubs like Merion have always done: strongly encourage people to use caddies by banning carts. You can only take a cart at Merion or Bandon Dunes if you’ve got a doctor’s chit. I’d have all those caddie programs, with 30 to 100 kids making money, learning how to be in life. And many of them would take up golf.