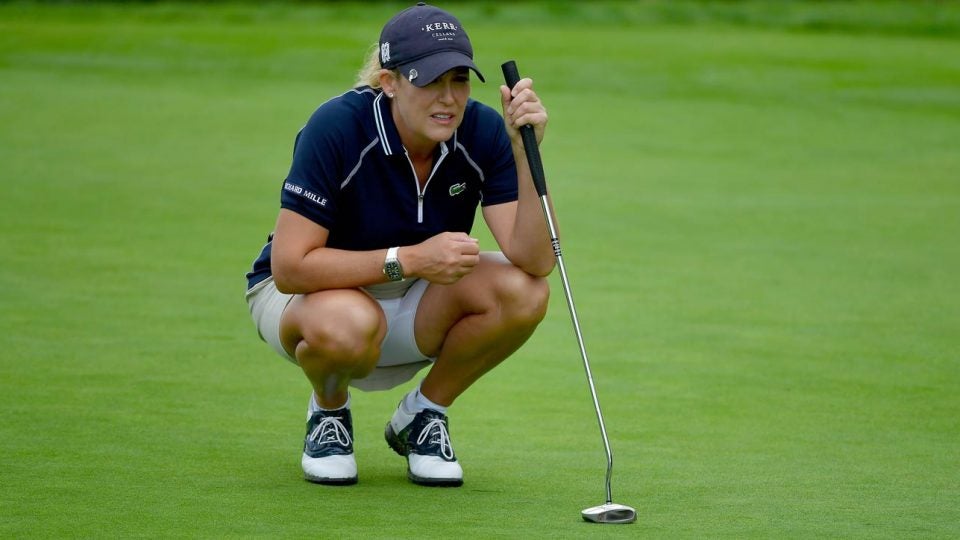 Cristie Kerr lines up her putt on the 15th green during Round 2 of the LPGA Kia Classic.

CARLSBAD, Calif. (AP) – Cristie Kerr shot an 8-under 64 on Friday in the Kia Classic to take a five-stroke lead into the weekend.

The 40-year-old Kerr had eight birdies in her second straight bogey-free round to reach 13-under 131 at rain-softened Aviara.

“I like winning. I like challenging myself,” Kerr said. “Definitely doesn’t get any easier as you get older with the travel and recovery time. I got up this morning and I’m like, `Man, why does my hamstring hurt?’ From working around this hilly golf course. The golf ball doesn’t know an age. I’ve always said that. As long as I stay hungry, going to just keep playing.”

She has 20 LPGA Tour victories, winning at Aviara in 2015. She won twice last year and helped the U.S. beat Europe in her ninth Solheim Cup appearance.

“It’s tough as you get older just being fresh and rested,” Kerr said. “I put more focus into that as I’ve gotten older. I still practice, but off the course I try to get more rest.”

“I really like this golf course. I really like the environment,” said Salas, the former University of Southern California player from Azusa. “My family gets to come out. So much confidence at the beginning of the week, and definitely showed the first two days.

Jeong Eun Lee was 7 under after a 69, and defending ANA champion So Yeon Ryu had a 70 to get to 6 under.

Lexi Thompson was 2 over after a 74, making the cut on the number in the final event before the major ANA Inspiration next week at Mission Hills.

“I don’t think you can fall asleep on one shot,” Kerr said. “It’s a really good golf course. I think I play better on courses that demand the focus, so I think that’s why I’ve played well here in the past. … I’m trying not to put limits on myself right now. I’ve got some good things going on with my swing.”

She has long been one best putters and green-readers in the world.

“I can see the subtleties that a lot of people can’t,” Kerr said. “It’s a gift from God being able to do that. I’ve always had that, so I’m lucky.”

Laura Davies withdrew after an opening 82. The 54-year-old Davies tied for second last week in the Founders Cup in Phoenix, playing through painful left Achilles and calf problems.