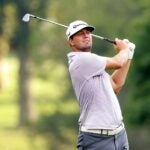 Taylor Montgomery watches a shot during the Nationwide Children’s Hospital Championship on Aug. 28, 2021, in Columbus, Ohio.

Fifty players earned PGA Tour cards over the last four weeks, but even more missed out on the chance to get to the top tour. Taylor Montgomery was among the latter, and he missed in heartbreaking fashion not once but twice.

Ryan French of the Fire Pit Collective is as plugged in to the development tours as anyone, and he says one stroke over two years could have been the difference.

Montgomery also missed crucial points earlier this season when he skipped the Wichita Open, but that was only because he qualified for the U.S. Open at Torrey Pines the same week. He made the cut and tied for 57th. But that stellar performance didn’t help in the Korn Ferry Tour points standings.

“I wouldn’t trade it for anything,” he told Golf Digest last month. “I definitely think I’ll be playing in more of them. I hope to be playing it more, but I would never miss the U.S. Open for Wichita. That’s for sure. Even though I do love that golf course, I would never make that trade.”

But even after missing the top 25 in the points standings, he was still in a good spot to secure a card through the three-event Final Series, which awarded 25 more PGA Tour cards. He was T16 and T18 in his first two starts and 14th on the list entering last week’s Korn Ferry Tour Championship, but he followed an opening-round 70 with a disastrous 85 on Friday and missed the cut. He was 12 over in his last six holes, and his 85 was his worst score of the season by eight strokes.

The 25th and final spot was eventually claimed by Justin Lower on Sunday, and that meant Montgomery was 26th. Lower beat Montgomery by 5.273 points for the final spot, and according to Korn Ferry Tour Communications, that was the equivalent of a two-way T73 finish or better at any of the three Finals events.