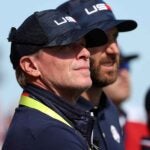 Steve Stricker is on the mend after being hospitalized with a mysterious virus.

Back in September, Steve Stricker was on top of the world. He had captained the U.S. Ryder Cup team to an impressive 19-9 romp over the Europeans at Whistling Straits in his home state of Wisconsin, and was well-positioned in the PGA Tour Champions’ Charles Schwab Cup standings, having posted 11 top 10s in 13 events in 2021, including two wins, a second and two thirds.

But just weeks after his Ryder Cup triumph, Stricker was felled by a mysterious virus that landed him in the hospital for a prolonged stay, and from which he’s still recovering. In an interview with Wisconsin.Golf’s Gary D’Amato, Stricker went into detail on the extent of his illness.

“I’m down 25 pounds,” Stricker said. “I’m freshman-in-high school weight. I lost all my muscle. I look like an 85-year-old man, dude. My skin is hanging.”

Stricker’s symptoms began on October 23. He had a bad cough and a sort throat. A Covid test came back negative, and after he received a prescription from his primary care physician, Stricker felt better briefly, then got progressively worse. Eventually, night sweats, a persistent 103-degree fever and a potential allergic reaction to a prescribed antibiotic landed him in the UW Health University Hospital, where his white blood cell count was high, his liver count was down and inflammation around his heart was causing it to go in and out of rhythm.

“I didn’t eat for two weeks,” Stricker said. “I didn’t have any energy or appetite to eat. I had a hard time just getting up and walking because of the heart. I took a few steps to the bathroom in my room and I’d be out of breath. I was pretty sick, from what they tell me.”

Stricker said his cardiologist told him it would be six months before he could compete again. He’s currently in Florida with his family and on several different medications, including a blood-thinner and a beta blocker to keep his heart rhythm in check. He’s also on a liquids-only diet.

“I’m on the shelf for a little while,” Stricker said. “I’m doing a little walking now, but not very much. I’m just trying to get back on my feet a little bit more.”

Despite his distressing experience, Stricker has maintained his trademark positivity.

“I’m lucky,” he said. “I’m feeling like things are going in the right direction. I’ve just got to give it time.”