How a seagull, and the Rules of Golf, impacted Madelene Sagstrom’s first shot at Carnoustie 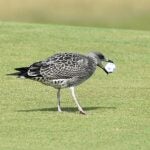 Madelene Sagstrom started the final round of the last major of the season two strokes off the lead and in the third-to-last group. She then found the fairway on the par-4 opener on Sunday, yet she still had to call in a rules official when she got up to her ball.

Why? Because a seagull was trying to play through.

Almost immediately after Sagstrom’s ball landed, a seagull started chasing after it and tried to carry it away. It was a mild success for the bird. According to Kay Cockerill, the on-course reporter for that pairing, the seagull moved Sagstrom’s ball about 25 yards back farther away from the hole.

Luckily, the Rules of Golf are prepared for situations like this, and Sagstrom was allowed to place her ball as close to the spot where it was believed to have originally come to rest. From there, she made par, and the seagull found someone or something else to bother.

Sagstrom closed with a four-under 68 and finished 11 under overall to tie for second, one stroke behind winner Anna Nordqvist.