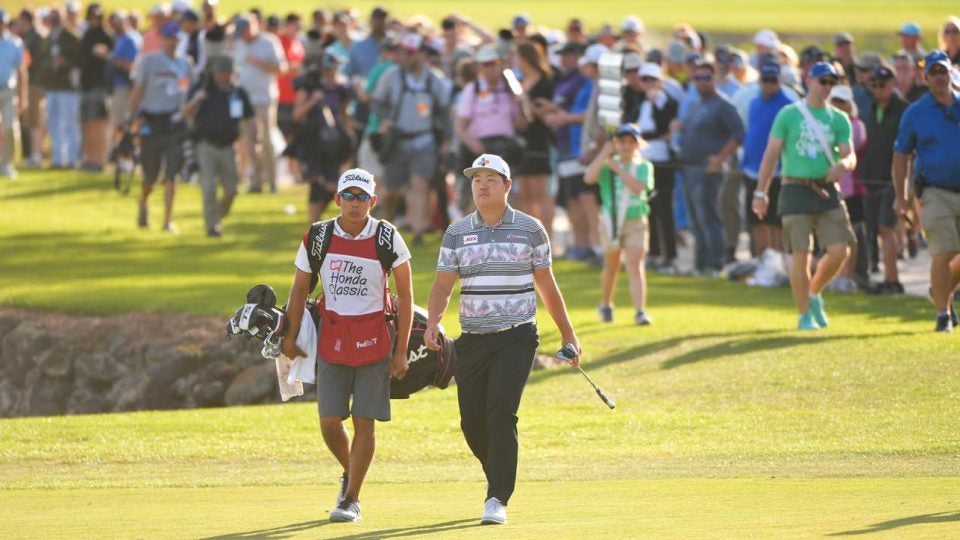 Albin Choi is in line for a big payday after caddying Sungjae Im to a win at the Honda Classic.
Getty Images

While Sungjae Im was taming the Bear Trap at the Honda Classic, several other fascinating storylines played out across the world of golf. Here’s what you might’ve missed.

A nice week at the office

The life of a caddie is not always glamorous. Save for some of the better-known loopers, the earnings can be meager and job security sparse. Caddying is an integral part of pro golf, but it can be thankless work. In fact, some caddies are players just trying to make it themselves. That’s the story for Albin Choi — the man on Sunjae Im’s bag this week during his victory at the Honda Classic.

Choi played on the Korn Ferry Tour for the last four years, but after a mediocre 2019 season and quick exit at Q school last fall, he doesn’t have status for the 2020 season. So this week, he hopped on the bag for the 21-year-old Im in the Honda Classic. This isn’t an uncommon move for players with limited status to become a substitute caddy for their buddies, but for Choi it turned into a pretty sweet pay day.

In his Korn Ferry Tour career, he has earned just $242,889 in five full seasons. This week on Im’s bag, presuming he gets the typical 10 percent that Tour caddies typically make in a win, Choi will take home $126,000.

Want to know purse disparity between KFT and PGA??

Assuming Im goes on to win and he gets 10% his caddy check will be over half of his career KFT earnings.

This is a tidy payday for anyone and illustrates the difference between the purses of the PGA Tour and its “triple-A” affiliate, the Korn Ferry Tour. By way of comparison, David Kocher won $117,000 by taking down this week’s Korn Ferry event, less than that of the winning caddie on the big tour. The margins may be thin in professional golf, but the wealth gap can be massive.

Sangmoon Bae has not played his best golf over the last season two seasons. Since his return from compulsory military service in his home of South Korea, he’s got just one top-25 on the PGA Tour. And save for a pair of top 10s – including a win — in the Korn Ferry Tour Finals in 2018 to regain his card, his play has been underwhelming. But this week on the Korn Ferry Tour he registered his best finish since that win with a T7 at the El Bosque Mexico Championship.

Bae’s week was highlighted by a second-round 62 on the 7,700-yard El Bosque Country Club track. The round was Bae’s lowest in a PGA Tour-sanctioned event and set the course record as he took the 36-hole lead.

He faltered on the weekend with rounds of 73 and 74, but the 33-year-old is making progress in his quest to return to form that allowed him to win twice on Tour.

Bae has split his time this season between the Tour and the Korn Ferry Tour, but because of his limited status on the former, it is important that he plays well when on the development circuit in an attempt to acquire better status. The finish jumps Bae 62 spots in the Korn Ferry’s standings as he chases a Tour return via top-25 finish on the season-ending points list.

With the postponement of three LPGA Tour events in Asia associated with the coronavirus outbreak, a number of players have flocked to the development tour called the Cactus Tour to keep their games sharp.

This week’s event in Beaumont, Calif. hosted a number of LPGA Tour pros, namely Carlota Ciganda, who won the event by seven shots.

The victory is no surprise when looking at Ciganda’s body of work. The 29-year-old is the 16th-ranked player in the world and has seven professional wins, including two on the LPGA Tour, plus a trio of top-10 major performances. But with the coronavirus throwing a loop in the schedule, Ciganda decided to take her talents to the development circuit to keep sharp.

Although you shouldn’t expect to see the biggest names in golf tee up in development tour events every week, it will be interesting to see how altered schedules plays a role in the quality of fields in these lower-level events.

It was a good week for 21-year-olds in professional golf. Sungjae Im won his first-career PGA Tour event at the Honda Classic, while fellow 21-year-old Sami Välimäki got his first European Tour win at the Oman Open.

Välimäki made a long birdie putt on the 72nd hole of the tournament just to force a playoff with Brandon Stone and then outlasted the South African in a three-hole playoff to take the title.

“It’s awesome,” Välimäki said after the round “There are not many words to say, it’s unbelievable.

The win marks the second week in a row a player hailing from a Scandinavian country has won on a major Tour following Norwegian Viktor Hovland’s win in Puerto Rico last week.

The win is Välimäki’s biggest in his young career; he was making just his sixth European Tour start. The win jumps him to No. 155 in the world, and more importantly suggests a super-bright future as he attempts to join the much-heralded next generation of golfers — who have some serious game.