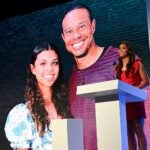 Sam Woods introduces her dad, Tiger, at his Hall of Fame induction on Wednesday night in Ponte Vedra Beach, Fla.

Tiger Woods is and always has been a private person. This is where it makes sense to mention that his yacht is called “Privacy,” but you probably already knew that. The point remains.

Despite Woods being a public figure since he was a teen phenomenon, we still know little about his personal life, beyond the minor details (there aren’t many) he shares. That’s what’s made the past two PNC Championships so entertaining — the golf, yes, but also the father/son dynamic between Tiger and his son, Charlie.

Charlie and Tiger have teamed up twice in the PNC, but on Wednesday night it was Woods’ oldest child, Sam, who took center stage to introduce her dad at his World Golf Hall of Fame induction. Her poise and delivery, at just a 14 years old, was remarkable, as she discussed Tiger, not just the golfer, but Tiger the dad.

Here are four things we learned.

Woods has long made it known his father, Earl Woods, who died in 2006, was his greatest influence and role model. Sam, who was born in 2007, mentioned that she never met her grandfather, but “I feel like I can hear his voice every day reminding me to ‘train hard, fight easy.'”

Apparently, Woods passed down some of the same lessons he learned growing up to his kids.

“This is an old special forces saying that he ingrained into my dad, who now says it to Charlie and I,” Sam said. “It not only teaches us that we have to put in the hard work to get what he want, but it’s that hard work that will pay off in the end.”

She later described a family trip to the Bahamas, in which everyone had an unfortunate run-in with jellyfish. But it hardly derailed their trip, Sam said.

“I realized while writing this speech that, no matter what life throws our way, we somehow come out together and stronger,” she said. “You know, train hard, fight easy.”

Sam went through a quick recap of Woods’ 2007 U.S. Open loss at Oakmont, in which he missed a birdie putt on the 72nd hole that would have forced a Monday playoff. But it still had a happy ending.

“He then had to rush to the airport, fly from Pittsburgh to Orlando, and drive to the Winnie Palmer Hospital,” she said. “Within five minutes of walking into the hospital room, still wearing his red golf shirt, on June 18, I was born. He may have lost that day, but he won the greatest gift of all.” [Laughter]

Sam said her father’s been a “continual presence” throughout their relationship.

“Whether it’s on FaceTime or school pickup or violin concerts or when we fail to teach our dogs tricks, he’s always there, and it’s been at the soccer fields and golf tournaments over the years that Charlie and I have begun to realize how famous he actually is,” she said, before rattling off a line that brought more laughter to the room. “I mean, how can a guy who still FaceTimes his friends to discuss Marvel and DC timelines and who goes to Comic-Con dressed as Batman be one of the greatest golfers that ever lived?”

She ended her speech by touching on Woods’ near-fatal car crash from February 2021, calling it “one of the scariest moments of your life and ours.”

“We didn’t know if you’d come home with two legs or not. Now not only are you about to be inducted into the Hall of Fame, but you’re standing here on your own two feet,” she said. “This is why you deserve this, because you’re a fighter. You’ve defied the odds every time, being the first Black and Asian golfer to win a major, being able to win your fifth Masters after multiple back surgeries, and being able to walk just a few months after your crash. Through thick and thin, you, Charlie, Erica, Kuna, and I will always be a team.”