How the U.S. Women’s Am champ defied her coach’s orders to win 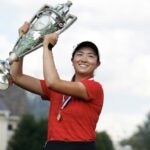 A week before the U.S. Women’s Amateur, Rose Zhang wasn’t even sure she would be able to tee it up in the event. A lingering wrist injury, the result of marathon practice sessions during quarantine, was flaming up, and her coach advised her to WD from the event. Zhang didn’t listen. It might be the best decision she’s ever made.

Zhang defeated Gabriela Ruffels in a back-and-forth, 38-hole final of the U.S. Women’s Amateur at Woodmont Country Club last weekend. The deciding blow came when Ruffels’ three-footer to extend the match brutally lipped out, ending her bid for a repeat and making the 17-year-old Zhang the champion.

“The ten days prior, I barely practiced,” Zhang said on Golf Channel’s Morning Drive. “I came out here just having a goal of making the cut … It just shows that even though I don’t have my A-game, I’m still able to compete with the best.”

However, the win didn’t come without struggles. Throughout the event — particularly the championship match — the wrist injury flared up and gave Zhang discomfort. But she persevered.

“I was not even thinking of withdrawing,” Zhang said. “I’ve practiced way too hard and this is such a prestigious event. I want to play it, no matter what.”

The top-ranked junior’s hopes of dethroning Ruffels looked to be dashed on the 36th hole when she hit a wayward drive and chunked her approach shot from the rough. But then she calmly stepped into her pitch from well short of the green and hit her wedge to gimme range to extend the match.

“It’s crazy, yeah, because I was actually watching her on TV last year, and I’ve seen her final round or her final match highlights and everything, and it just made me think, ‘Wow, she’s such a great player,” Zhang said after the match. “It just made me want to work on my game more, and she inspired me to keep playing the game that I love.”

That respect is a mutual one. Ruffels called Zhang one of her “toughest opponents” and was particularly impressed with her precision on the course.

Now Zhang heads back to her life as a teenager in Irvine, Calif. She’s getting ready for her senior year of high school before heading off to Stanford next fall. In the meantime, Zhang’s got plenty of practice ahead, plus she’s got to sift through the 300-plus congratulatory texts she’s received.

“This is all surreal to me,” Zhang said. “It’s probably going to take a while for it to sink in.”