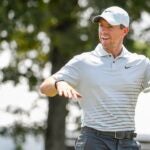 Rory McIlroy's memory stretches back to missed putts of old.

For all the credit we give Rory McIlroy for his candor and wit behind a microphone, there are times when he can’t help but be just as literal as the rest of us.

On Wednesday, McIlroy was asked if had any advice for Justin Warren, a mini-tour pro chasing his first PGA Tour start who’d missed a kick-in during the Barracuda Monday Qualifier in a sudden-death playoff. He paused, looked down, half-grinned and said exactly what everybody else was thinking.

“Don’t miss one-footers, I guess, is a piece of advice,” he said. Then he winced; no golfer can picture a missed one-footer without some sort of physical reaction.

But McIlroy would never just leave it there.

“I guess that’s a little bit of tough love,” he said. Then he pulled out a 13-year-old memory.

“My first chance to win a professional event was in Crans-sur-Sierre in the European Masters in 2008 and I basically missed like, a one-and-a-half-footer in a playoff and it probably — I thought about it for a long time until I got that first win.”

There’s a chance you’ve forgotten the exact details of the 2008 European Masters, so here goes: McIlroy, 19 years old at the time, was a prodigy chasing his first European Tour title and carried a four-shot lead into the final round. He needed just par to secure the title on 18 but missed a five-footer, sending him into a playoff against World No. 460 Jean-Francois Lucquin of France.

On the first playoff hole, McIlroy lagged his birdie putt to a short distance — one to two feet — and missed the tap-in, effectively handing Lucquin the victory. Lucquin needed just two putts to win and ended up making his birdie putt anyway, rendering McIlroy’s bogey moot. But the moment stuck with him anyway, at least until his first professional win at the Dubai Desert Classic in February 2009.

As for Warren, who counts McIlroy as his favorite player?

“I guess the solace he can take is he’s played well enough to give himself a chance,” McIlroy said. “Like, we all do dumb things under pressure at times, I’ve certainly done them. The next time — you know, I learned from that. Every putt that I had, I took a little bit more time and I wasn’t quite as careless. So there’s a lot of things you can learn from these things.

“I guess he can take encouragement that he gave himself a chance and he played well to be in that spot.”

The missed putts may not sting quite as much now that McIlroy has four majors and $50 million to his name, but he still knows the pain of a lip-out. Fresh on his mind was the birdie putt that went edge-and-out as he played off for the bronze medal at last week’s Olympics. After he was eliminated, McIlroy brought Irish teammate Shane Lowry back to the scene of the crime to take a look. The moment was still top of mind on Wednesday.

“It was funny because the way the light was, that green got pretty chewed up at the end of the day and I was just showing him, I was like, jeez, I hit a good putt and it was one of those that took a bump halfway down the putt and sort of went a bit further right. That’s all I was really showing him.”

McIlroy’s remarks on Wednesday weren’t all missed putts and regrets, of course.

He had a “wonderful time” at the Olympics, he said, and has eyes on the next Games. “I’m already looking forward to Paris,” he said.

He explained his no-hat look at recent team events, which comes from his small head. “I just don’t want to look stupid with a hat that’s too big on me going to these team events,” he said, adding that Ryder Cup Europe expects to have a satisfactory range of hat sizes this time around.

He praised the boost in prize money to the Irish Open, a tournament McIlroy has long supported, calling it “wonderful for everyone involved.”

And he explained what he found in Tokyo, a playing style he hopes to tap into in the coming weeks.

“So I think the Olympics was a big week for me last week because I played with more freedom there, and that obviously panned out well. I played my best tournament I’ve played since the U.S. Open, which was good.

“So I think that’s really the focus for me over these next few weeks, is play with as much freedom as possible. That’s really it. I know if I do that then I’ll be able to play some of my best golf, or at least give myself the chance to play my best golf.

“More freedom, less thought, more fun, try to have a little more fun with it and then go from there.”

McIlroy tees off at 9:59 a.m. on Thursday alongside Jordan Spieth and Brooks Koepka.