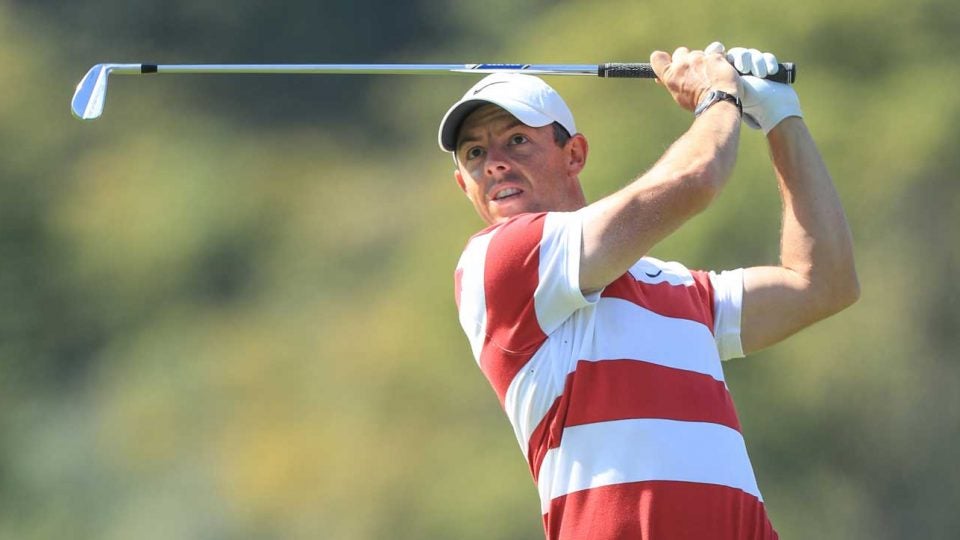 Rory McIlroy followed up a first round 68 with a 67 Friday.
Getty Images

PACIFIC PALISADES, Calif. — It’s incredible how the best golfer in the world can fly under the radar but Rory McIlroy somehow pulls it off. The new No. 1 has been chugging along in first gear this week at Riviera Country Club, driving quite normally, ball-striking quite normally and putting quite well to shoot 68-67.

His normal is just that good.

The 135 strokes he’s made add up to 7 under on the leaderboards, which is 2nd place (by two strokes) to Matt Kuchar, a figurative Volvo to McIlroy’s Lamborghini. For those looking to contend this weekend, it’s hard to imagine a more intimidating name tracking them, save for maybe Tiger Woods.

But Woods was the tournament host who captained some celebrities Monday, played with amateurs Wednesday and has scraped together just nine solid holes in his opening 36. Tiger was the talk of the week here in bougie Los Angeles, but he is likely to stay winless for the 14th time here at Riviera.

If not Tiger, we focused on Brooks Koepka, who was making his 2020 Tour debut. Koepka’s inconsistency on and around the greens has him nine shots back and in no condition to chase the lead. There he was late Friday evening, searching for some driving sense on the range.

News
Genesis Invitational: Here’s everything you missed from Round 2 at Riviera

If not Brooks, then perhaps we wondered about Phil Mickelson, who had strung together 3rd place finishes some 8,000 miles apart. Mickelson’s game has nosedived with poor iron-play — puzzling for one of the best ever at it — approaching the green 106th-best out of 120.

Add them all to the growing list of players searching for something at this pivotal moment of the Tour season. Jordan Spieth has switched his grip, Jason Day has stuck with a full-time caddie. Everyone seems to be looking for something. The drive down Magnolia Lane is just five weeks away.

Among the madness, McIlroy has found incredible tranquility. “I keep saying golf isn’t about the other people, golf is about yourself and golf’s about getting the best out of what you have,” he said earlier this week. “If you keep doing that and you keep that mindset, everything else will fall into place.”

When you’re that talented, it definitely does. McIlroy, who seems to love Riviera, has been happy to bow to its difficulty. On the back nine, he’s really only gunning for the par-5s (11 and 17). Elsewhere, he’s picking his spots. “I’m thinking my way around the golf course and, you know, that’s what this place is all about,” McIlroy said after his round. “I mean, you can hit a few squirrelly shots and get away with it as long as you miss it in the right places.” (Sound like another course?)

He’s as fun a golfer as there is to watch at his peak. The boss-level version of McIlroy has all kinds of tells, and he’s not good at hiding them. He struts, he’s out in front, he twirls and chases after it. His best tell actually comes right before the club twirl and lasts as long as a heartbeat. McIlroy poses at finish, and before twirling his club, flexes his wrists one beat. The wrist flex is the true tell. He’s flagging something, and you don’t need the Houston Astros to help clarify what it is.

McIlroy showed his true tell here and there during a so-s0 warmup session Friday. He clued in the many onlookers whenever he really pured it, but not once did it happen during the round. Not once did he give his true tell of total confidence in his shot, and there he was, effortlessly carving out 33-34 to regain favorite status at the Genesis. The golf world suddenly feels ripe for the taking.