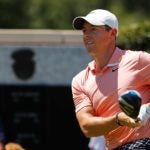 Rory McIlroy struggled to a front-nine 41 during the final round of the 2020 Charles Schwab Challenge.

World No. 1 Rory McIlroy was the prohibitive favorite heading into the PGA Tour’s return at last week’s Charles Schwab Challenge, and for good reason — the 31-year-old hadn’t finished outside the top 5 in a Tour event since … August 2019!

Yes, you read that right. McIlroy finished T19 at the 2019 BMW Championship in August before embarking on quite the run, which began with a win at the Tour Championship the very next week.

After nearly two months off, McIlroy then started his 2019-20 Tour season with a T3 finish at the Zozo Championship in Japan in October 2019, followed by a win at the WGC-HSBC Champions in China in November.

McIlroy picked up right where he left off at the Farmers Insurance Open in January, finishing T3, followed by a T5 at February’s Genesis Invitational and a solo fifth at the WGC-Mexico Championship.

His streak continued with a T5 at the Arnold Palmer Invitational in March, a tournament that immediately preceded the Players Championship, where McIlroy was the defending champion. Unfortunately, we all know how that week ended, with a cancelation of the tournament after the first round due to the coronavirus pandemic.

Given McIlroy’s excellent form prior to the Tour’s three-month break, expectations for the four-time major winner were sky-high in the lead-up to the Charles Schwab Challenge. And for the first three rounds, McIlroy delivered, firing 68-63-69 to enter the final round only three shots behind leader Xander Schauffele.

But a final round meltdown — a four-over-par 74 that included four bogeys and a double on the front nine alone — sent McIlroy tumbling down the leaderboard. He eventually finished T32, officially ending a seven-event streak of T5 or better that spanned over six months.

“I got off to a really bad start,” McIlroy conceded after his round on Sunday. “But you know, sort of played all the way to the end, shot a decent back nine. I was a couple under on the back. But front nine I just got into a rut and played a bad run of holes, and obviously that put me out of the tournament.”

The good news for McIlroy? He has a chance to redeem himself right away at this week’s RBC Heritage in Hilton Head, S.C — a tournament he hasn’t played since 2009, when he was just 19 years old. That week, he finished T58.