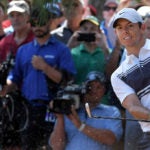 Rory McIlroy will tee it up at Colonial when the PGA Tour returns in June.

Rory McIlroy won’t waste many starts when the PGA Tour returns next month.

In an interview with Golf Channel’s Todd Lewis on Wednesday, the World No. 1 said he plans to play the PGA Tour’s first three events after its nearly three-months-long pause from the coronavirus.

The season resumes at the Charles Schwab Challenge at Colonial in Fort Worth, Texas, on June 11-14. The next two stops are at the RBC Heritage at Harbor Town (June 18-21) and the Travelers Championship at TPC River Highlands (June 25-28).

“For me, personally, I just want to get back out and play,” McIlroy said.

On Wednesday, the Tour released a lengthy document outlining its health and safety guidelines to return to play. It included testing protocols, new rules for limited, on-site personnel, media restrictions and more.

“I think it will be nice to get back out there and play,” McIlroy said. “Obviously we’re going to have to take as many precautions as possible to be able to put a Tour event on again, but I think the PGA Tour has a very robust plan in place, and if they can execute it the right way I don’t see any reason why we can’t start June 11. If we do, I’ll be ready to go.”

When McIlroy returns, he’ll try to add to what was a strong start to the 2019-20 season. He won the WGC-HSBC Champions in November and has finished in the top five in all six of his starts. This all comes after he capped the 2018-19 season by winning the Tour Championship.

Golf fans won’t have to wait until June to watch McIlroy on TV, though. He’ll star alongside Rickie Fowler, Dustin Johnson and Matthew Wolff at the Taylormade Driving Relief at Seminole in Florida on Sunday. The broadcast begins at 2 p.m. ET on NBC. You can learn more about the skins game here.