#AskAlan mailbag: Is the Rory McIlroy-Brooks Koepka rivalry about to get heated?

In this installment of the #AskAlan mailbag, GOLF senior writer Alan Shipnuck answers questions about the distance debate, how Phil Mickelson would fare on the Champions Tour, the budding rivalry between Rory McIlroy and Brooks Koepka and much more.

Alan, if all equipment, including the ball, was dialed back today to take out the bomber driving, which 3 golfers would win more tournaments or majors this year? Thanks -@forearmshivers

I can’t name three because Tiger would win them all.

Would you play a round with President Trump if given the chance? Who will win? Has he hit a hole in one yet? -@TiaanEllis

Of course I would! It’d make a helluva story for GOLF Magazine/GOLF.com. At a Ryder Cup years ago Jordan Spieth objected to my line of questioning and said, slightly miffed, “You’re an American, right?” Not that week — I’m a neutral observer, traveling on no passport. Same with this Trump scenario. Whatever my personal politics may or may not be, it would be fascinating to observe the First Golfer up close and report back to interested readers. Trump does have at least one indisputable ace — it came on the 12th hole at Spyglass Hill during a long-ago Crosby Clambake. As for who would win our match, most folks who know Trump’s game claim he is an 8 or 9. I’m a 7 or 8, so it could go either way. And the dude’s game is much sharper than mine because I have a very demanding job that keeps me from playing a lot while he apparently has tons of free time to tee it up regularly.

Does Rory have the demeanor for a real, heated rivalry with Brooks? -@TheTexasSteve

Alas, not anymore. Dude has gone so Zen on us he won’t engage in the necessary woofing and shenanigans to stoke the rivalry. While this is probably good for Rory’s mental health and a longer reign at the forefront of the game it definitely feels like we’re getting cheated because those two have by far the most alpha energy in the game. But if Rory and Brooks keep going head-to-head in the biggest events it will become a pretty spicy rivalry whether they like it or not. 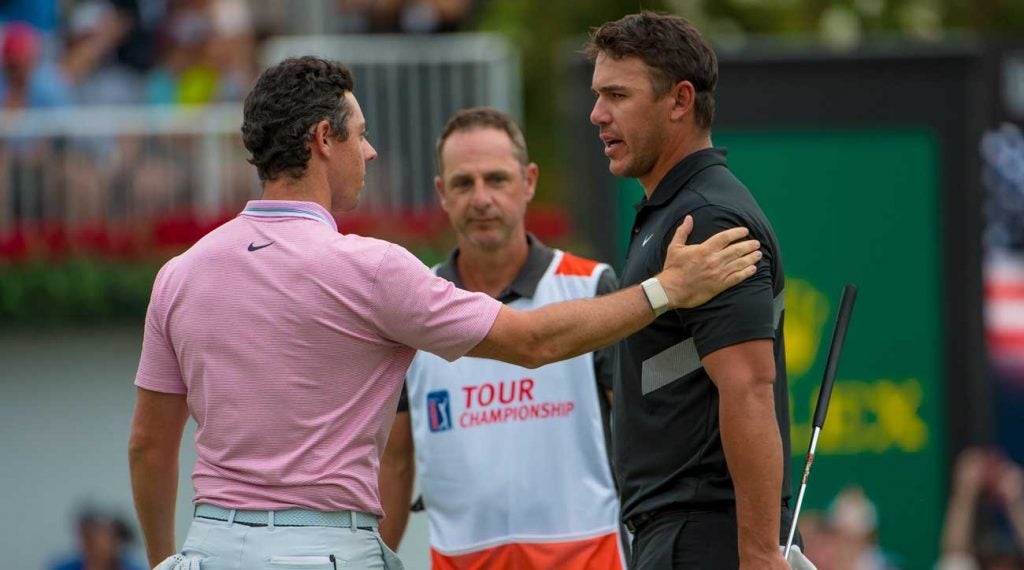 Hi Alan, long time, many time questioner here. Here’s mine: the Tour and the AT&T pro-am has just announced that you are the new authoritarian Zsar of the tournament and broadcast. What do you do? I’ll hang up and listen… -@harryarnett

First thing I do is change the name back to the Crosby Clambake. So evocative and cool. Next, I jettison the amateurs. Can you imagine how pure that event would be if we could set up the course for only the pros, with firm, fast greens and tough pins? This year’s final round offered a taste of how glorious it would be.

But if by law I’m forced to keep the ams, the key is to change up the energy. The jocks are fine, because it’s always interesting to watch professional athletes get humbled by the game. Bill Murray is great. But no other actors or singers or other psuedo-celebs shall be allowed, because none of us really care. Nor do we want to have to watch nameless, faceless rich white guys. If there are going to be amateurs they need to be golfy public figures. It was compelling to watch Jerry Tarde on Sunday because he’s been writing about golf for going on four decades, so some/many of us are invested in his experience. Imagine if he had a social presence and had written a Sunday night piece about the experience. Now add me, Bamberger, Dethier, Zak, LKD, J-Wall, Soly, Tron, Lavner, Beall, Porter, Porath, Lynch, Huggan, Riggs and a few other media folks to the field. The blast of content would be awe-inspiring and the golf viewing morbidly fascinating. Then put George Gankas in the field. Bones. Jeff Knox. Fred Ridley. Tom Doak. Mike Keiser. David Kidd. Claude Harmon. Mike Whan. There are amateurs that golf fans might actually care about. We certainly know their backstory.

But even with these changes, the Saturday telecast has to be more about the pros. And it’s criminal that neither the Tour or Golf Channel will invest the money to properly cover Spyglass and the Shore Course over the first three rounds. Both are wonderful tests and so telegenic, but all we get is chintzy video of dudes putting, because there are only a couple of cameras on the grounds. It’s absurd and infuriating.

If you could transport one hole from Pebble to your home course which one would it be? -@GoDuckYourself

Ummm, Pebble is my home course!

Gawd, I hope not. Of course, Zika turned out to be a curse only to male professional golfers, to the great shame of the game. Every other athlete from every other country showed up and had a great time in Rio. Hopefully the coronavirus will be contained well before the summer and a non-factor for these Games, thus compelling all of the men’s game’s point-missers to come up with another milquetoast excuse for snubbing the flag they otherwise love to wrap themselves in.

Dirty Harry gets a lot of flack each year at this event for his performance on TV. Can you confirm:
1. That’s he watching the golf on a monitor in the upper corner of the booth.
2. He could, at 90, still kick the sh!t out of all these nerds mocking him.
– @fakePOULTER

Yes, Clint always gets caught staring at a TV when he’s actually on TV. Someone needs to give him a heads-up! It’s clearly time to retire this tradition, which CBS seemed to realize about 30 seconds into this year’s interview. But it is sad to see Eastwood being mocked because, as you point out, he’s still vital at 89. The dude is an O.G. and should be accorded more respect.

Doubles and eagles, firm, fast and windy conditions, a commentary that doesn’t make you want to throw up – is the Vic Open now the best golf tourney on TV? -@theboyslater

It was indeed deeply satisfying. And you didn’t even mention the coed aspect which made the telecast that much more interesting and added a lot of buzz to the event. It’s time to start our campaign for the Vic Open as the Fifth Major.

News
#AskAlan mailbag: How legit are celebrities’ handicaps at the Pebble Beach Pro-Am?

As players, pundits et al weigh in on the distance debate, what’s the best way to tell if they actually believe what they’re saying? -@Lou_Tireworld

By how loud they’re shouting. Or if they type in ALL CAPS. Kidding. Sort of. Those who recognize there is a problem are being sincere, except for the minority among them who feel compelled to be politically correct/woke. The shrill apologists for the manufacturers are mostly bought and sold and thus easily discounted. Or they’re speaking in tongues. Either way, it’s impossible to take them seriously.

If he decided to make the move, how many PGA Tour Champions events would Phil win? All of them? -@jeffvalois

Many to most. Phil is still Phil and subject to wild unpredictably. But he’d be one of the handful of longest hitters, have among the best iron games and clearly still possesses plenty of short game magic. It’s not an accident that the most dominant Senior golfers ever are Jack Nicklaus, Peter Thomson, Lee Trevino, Hale Irwin and Bernhard Langer, all Hall of Fame talents. If you can’t beat someone when you’re 25 or 35 you’re not gonna suddenly start beating them when you’re 50. Phil has spent the last three decades dusting all of those guys so nothing would really change on the Senior tour if he was motivated. 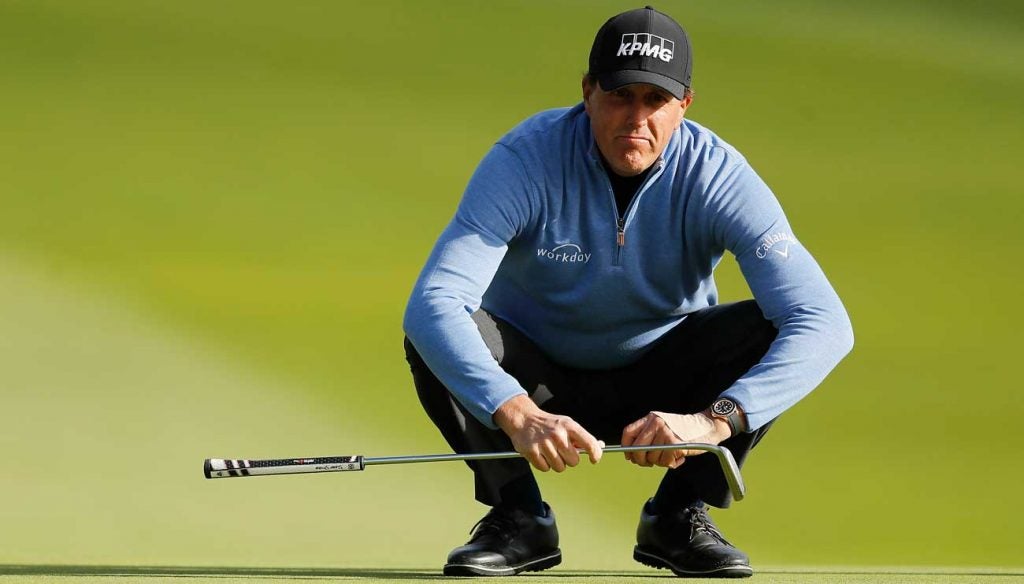 The CBS crew took big step back in DL3–nice guy but golf needs a smartass that knows enough about golf—you would be the perfect fit—did you offer your services? -@WayneOW66L67

I’ve done just enough TV through the years to know that I hate the medium — it’s so shallow and ephemeral. But I think you’re on to something here: golf telecasts are so *serious,* with all the whispering and mock solemnity, as if the tournament is being conducted in a cathedral. Feherty’s zingers are always welcome. Raja brings a nice, light touch. So does J. Foltz. Otherwise, every other announcer has Cronkite’s the-President-was-just-shot vibe. (McCord tried a bit too hard but suddenly he is missed, too.) Golf is the most internal of sports; beyond swing analysis and occasional course management second-guessing, there not that much that needs to be said. It would be helpful to have more wit and more insight into who these guys are; basically, journalistic chops should be more important than a long playing resume, though the latter criteria seems to be the most important to the television decision-makers.

Having seen you court-side, I have to ask, which coaching icon are you modeling? You had the fatherly appearance of John Wooden when in the huddle but the outwardly appearance of Bobby Knight (sans folding chairs) with the red V-neck sweater. Please do tell. -@Turnacliff

One of the fun aspects to last week’s Crosby Clambake was that a lot of golfy folks came out to cheer on the Carmel High JV girls basketball team, for which I’m the head coach, and the varsity squad on which my daughter Abby plays and my best friend Kevin Price coaches. (KP is a part-time caddie at Pebble Beach and last week looped for one of the amateurs in the Clambake, rushing from the links straight to practice and games.) Joe Horowitz, who was recently featured in the pages of GOLF Magazine, sang the national anthem before one of our games. Gotta love how the golf community supports their own.

Per the question, I think I’m Tark more than anyone else. I try to sit on the bench and be mellow, though I bite my knuckles instead of a soggy towel. It’s a player’s game and you gotta let them do their thing. But Wooden’s name has definitely been raised in practice a few times, too…though it requires a bit of a history lesson since none of the teenage girls on my team know who he is.

News
How Tiger and Phil (yes, Phil!) could help the rulesmakers shape the distance debate

When David Duval shoots 84 and WDs at the AT&T what happens to his pro-am partner? Does he go out as a single? Does he have to find a substitute pro? Antiquing in Carmel with DD? -@seanK13

There are always a couple of pros on standby ready to step in. Their score counts only toward the pro-am portion. One regular in that role is the aforementioned Horowitz, who has been called upon a couple of times in the past.

When does one realize golf has become an addiction? -@mkspen

When you play crappy and walk off the course drowning in disappointment, shame, and self-loathing…and can’t wait to do it all over again.