How Tiger and Phil (yes, Phil!) could help the rulesmakers shape the distance debate 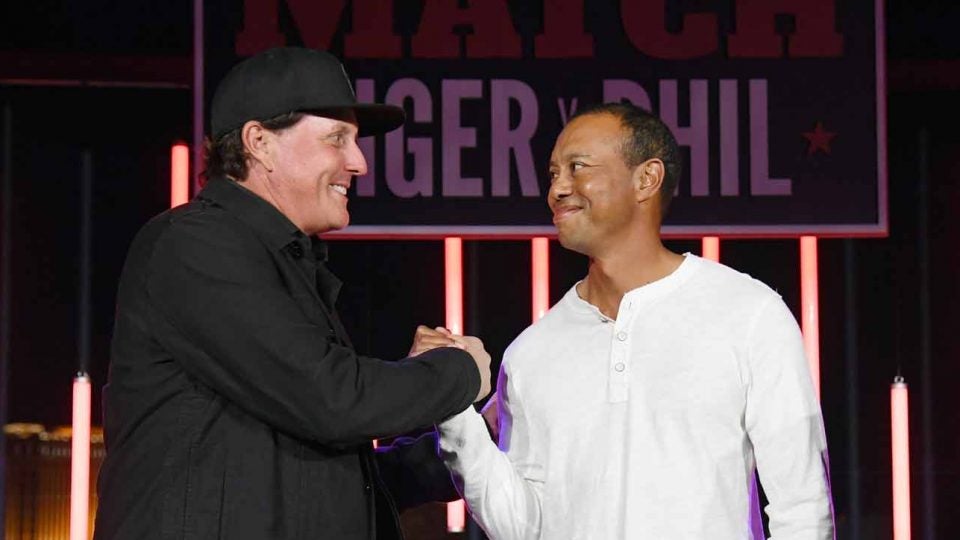 When it comes to the distance debate, golf's governing bodies could use the support of two of the game's most popular figures: Tiger Woods and Phil Mickelson.
Getty Images

The good people (meant literally) at the USGA and the R&A, be they amateur or professional — the governing bodies are populated by both, despite what you may have heard — are trying to do something audacious here. For the long-term health of the game, they want faster rounds on shorter courses.

To get there, they need help. They need you.

What the gentle ladies and men of central New Jersey and coastal Fife don’t apparently see is the path to you. It won’t come in the perfectly crafted sentences offered in a recent 100-page distance report, with the promise of more study.

To reach us, they need Arnold. And since Arnold Palmer is not available, they need his closest heir: Tiger-‘n-Phil.

They need to get Tiger Woods and Phil Mickelson, as a tag team, to do their selling. Whomever Tiger cannot reach, Phil can. That’s the theory here, anyway.

A checkbook won’t help the USGA win over Tiger and Phil. The USGA cannot buy loyalty as a manufacturer can. Professional golfers (typically) are interested in moving product in the name of making money. But shorter courses played with equipment that takes its cues from yesterday flies in the face of the bigger-is-better mentality that they know, and we know, so well.

The last time the USGA had the unquestioned respect of its rank-and-file members — that is, us — was when Arnold Palmer was synonymous with the Far Hills gang. It was a win-win-win.

Arnold, a son of the working class, wanted the status blazered patricians could confer. Those well-mannered men wanted to reach Arnold’s everyday people. (Us.) We wanted to hang with Arnold in whatever way we might. Everybody hits.

In 1975, Palmer was given an actual USGA title, honorary chairman of the USGA Members Program, and his name and title was on hundreds of thousands of bag tags. It helped in every possible way.

Including the standing of the U.S. Open. It was then the king of all golf events, ahead of the British Open and way ahead of the Masters. Jack Nicklaus won six Masters. He’s a member of Augusta National. To this day, he says he always thought of the Masters as “a nice little invitational.”

This, of course, is a different time. If the USGA wants to effect change here, it needs to do something it is not doing. It needs to win over the public. Broadly speaking, it has not had the public for decades.

If the USGA wants to effect change here, it needs to do something it is not doing. It needs to win over the public.

You won’t see these real-world sentences in the recently published USGA/R&A distance report unless you had the invisible-ink edition: We want to restore 7,200 yards as a meaningful total yardage for the longest hitters in the game, and 570 yards as a true three-shot par-5; more significantly, we want a 6,000-yard course to be more-than-enough for your off-the-rack 40-year-old male golfer trying to break 90 and play a round without losing a ball. Ladies should easily be able to take off a thousand or so yards from that.

It’s a great dream and a worthy goal but it will never happen unless the USGA and the R&A can sign on Tiger and Phil as its chief lobbyists. Annika Sorenstam and Rory McIlroy could help, too.

The starting point is Mickelson. That’s because the USGA has at least a chance with Woods, who has had the greatest USGA career in USGA history: three U.S. junior titles; three U.S. Amateur titles; three U.S. Open titles. The latter came on three public courses: Pebble Beach, Bethpage Black and Torrey Pines.

Woods, at 44, is morphing into an elder statesman role right before our eyes. In fact, he’s closer to it than Phil, who turns 50 in June. (At this stage in their lives, they are basically the same age.) In the years to come, Woods will become the ultimate Establishment figure in the game. It’s extremely unlikely he’s going to sign on for this Premier Golf League tour. For one thing, with his son and daughter in middle school, he wants more time at home, and in the lower 48, not less. He will, like Arnold before him, become a defender of traditional golfing values.

This is little-known and less understood: If Woods, along with Palmer, had been against the USGA/R&A anchored putting ban, first announced in 2013, it never would have happened. Their support of the ban gave Tim Finchem, then the PGA Tour commissioner, all the firepower he needed. The dispute turned into the PGA of America versus the USGA and once the PGA Tour was on the USGA’s side, that ban was going through, whether it was good for the game or not. Finchem, the craftiest of politicians, played the PGA of America like Isaac Stern played his fiddle. It wasn’t even a fair fight.

It won’t be easy, at all, to get Tiger on board with this current USGA effort, but it can be done. Nicklaus could surely help. But getting Phil on board will be more challenging yet. For one thing, he is an iconoclastic thinker. He draws much of his strength from thinking for himself. Nobody, really, talks him into anything.

Mickelson’s golf career has been defined by his play in USGA events and his relationship with the USGA. He won the U.S. Amateur in 1990. He’s finished second six times in U.S. Opens. You almost wouldn’t think that is possible. His antipathy toward the USGA is part of his legend.

About five years ago, the USGA offered Mickelson its most prestigious award, the Bob Jones Award. He turned it down. Last week, Mickelson said he would not accept an exemption for the 2020 U.S. Open at Winged Foot were he offered one. He has often complained publicly about how the USGA sets up courses for U.S. Opens, before, after and during play. (See: 2013 U.S. Open, Merion, fourth round, par-3 third hole. “That’s terrible, 274 yards,” Mickelson said to Mike Davis of the USGA. “We can’t even reach it.”) Then there was his hockey moment on the 13th green in the third round of the 2018 U.S. Open at Shinnecock Hills.

If somebody could somehow convince Mickelson that golf, at every level, would be better on shorter courses with balls and clubs that pack less heat than what is being sold today, that could be the start of a true revolution.

Do not hold your breath. Mickelson’s comments last week understandably protected his game, which starts with clubhead speed:

“I struggle with some of our governing bodies. I struggle with it because we’re the only professional sport in the world that is governed by a group of amateurs, and that leads to some questionable directions that we go down. I wish that we had people that are involved in the sport professionally to be in charge a little bit more.”

Mickelson has a profound understanding of what works for him as a professional golfer. What the USGA and the R&A really want is a challenge to that. It’s a challenge to self-interest. It’s a nod in the direction of sustainability and conservation at every level of the game, a de-emphasis on length at the elite level and for weekend golfers a re-emphasis on the ability to play in under four hours and with one ball.

“My father’s thing was, ‘Hey, make golf fun for recreational golfers, give them holes and equipment that keep them coming back for more,’” Palmer’s eldest daughter, Peg Palmer, said recently. “I guess everyone who loves golf has struggled with the focus on etiquette, the seemingly esoteric rules, the elite access. I suppose my dad swelled with pride by upholding the standards set by the USGA, and he was mad as hell when they shot themselves in the foot.”

Hey, nobody said this would be easy.