Rory McIlroy and Brooks Koepka have played together an awful lot of late. A month ago, the duo showed down in the final pairing at WGC-Memphis, which Koepka ended up winning. Then FedEx Cup seeding dictated the two played together in the first two rounds of both the Northern Trust Open and the BMW Championship. Sunday, the two were paired together again, this time in the final round of the Tour Championship, gunning for a $15 million first prize.

This time it was McIlroy’s turn to emerge on top after a final-round 66 gave him a statement four-shot win. Koepka shot 72 to finish T3.

“I’ve played a lot with him over the last couple weeks. But his game is in great form right now. It’s really impressive to watch,” Koepka said after the round. “Like I’ve said multiple times, he’s the most fun to watch when he’s playing well. He hits it so good, he putts it really well, and when he’s on, man, he’s tough to beat.”

Koepka held a one-shot lead going into the round, but that evaporated at No. 7, when he lost his tee shot and went on to make double bogey while McIlroy poured in a birdie putt for a three-shot swing. The rest was history; McIlroy iced the tournament with birdies at 12 and 13 while Koepka bogeyed 12-13-14. 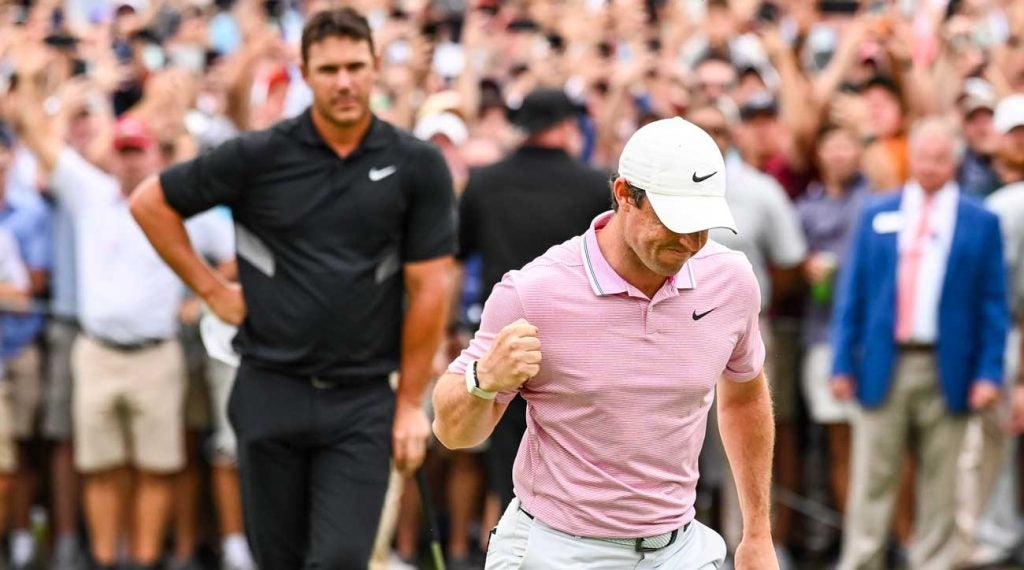 “I think one of the biggest things is sometimes I try to treat Sundays the same as a Thursday or Friday, and they’re not,” McIlroy said. “I go into them maybe a little too relaxed and a little too — it’s not the same, and it’s about trying to get yourself in the right mindset. And Brooks went out there in Memphis and shot 65 and just basically dominated the tournament, dominated me. And I realized if I want to become the dominant player in the world again, I need to be more like that.

“I need to — I guess that’s the ultimate compliment I can give Brooks is today I wanted to be a little bit more like him.”

The mutual respect was clear post-round. “I enjoy competing against Rory. He’s a tough competitor. He grinds it out, man. Even when you’re playing with him, it’s fun to watch him.”

With the win, McIlroy not only claimed the largest single prize in golf’s history, he also leapfrogged Dustin Johnson to regain his spot at No. 2 in the world rankings — behind only Koepka. It also ignited some murmurs that McIlroy could challenge Koepka for Player of the Year honors.

Justin Thomas, who finished T3 alongside Koepka, weighed in on that debate. “Yeah, I think it just depends on how everybody views the voting. I would — in consistency, Rory has outplayed Brooks by a mile in how he’s done the entire year. It’s unbelievable how he’s played. But the most important thing is wins and playing great in the big events, and nobody has done that better than Brooks. I don’t know how you don’t give Brooks the Player of the Year with three wins and a major and a WGC and top four in every major.”

Koepka and McIlroy are temporarily cemented at 1-2 in the world for as golf heads to its brief offseason — and McIlroy and Koepka get recharged for their next showdown.

“Brooks is a great player. He’s turned into a heck of a player over the last couple of years, and I definitely expect more Sundays like that between the both of us in the future,” McIlroy concluded.